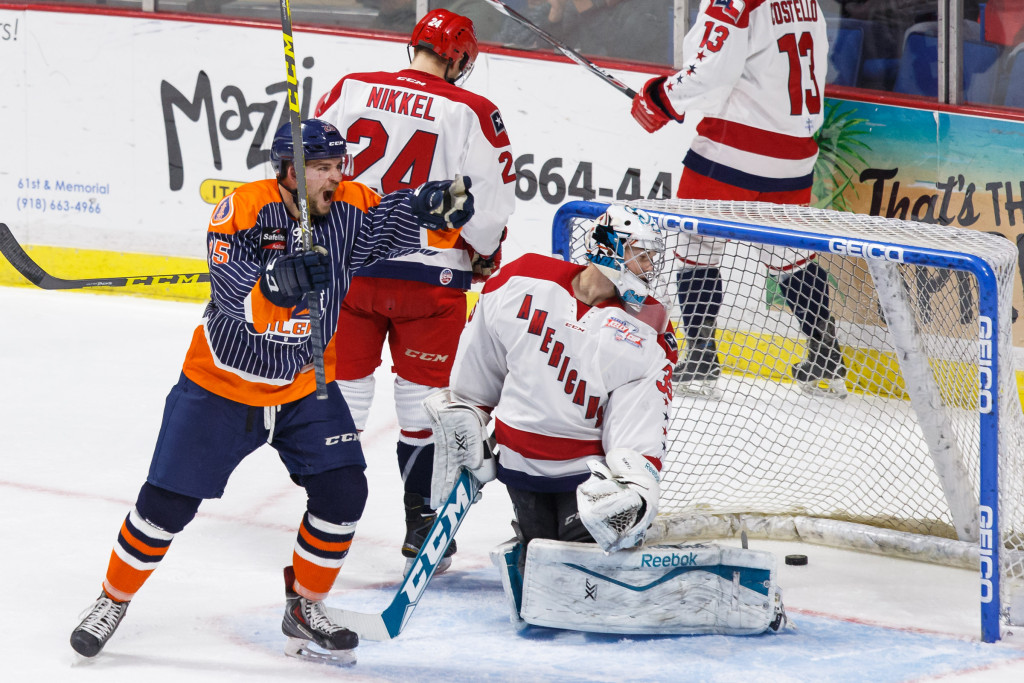 Mathieu Gagnon celebrates his first goal of the season on Sunday afternoon at the BOK Center. (photo by: Kevin Pyle – www.photopyle.com)

WEEK IN REVIEW
The Oilers battled back from a three-goal, third period deficit on Friday night but ultimately had to settle for a single point in a 5-4 overtime loss to the Missouri Mavericks.  Forwards Phil Brewer and Christophe Lalancette each contributed a goal and an assist as the Oilers suffered their first OT setback of the season.

Saturday in Allen, the Oilers snapped a five-game winless streak with an impressive 6-1 victory over the Americans.  Adam Pleskach recorded the Oilers’ first hat-trick of the season and six Oilers’ players posted multiple points to help Tulsa post its second road win of the season.

In the weekend finale on Sunday, a third period comeback bid fell short in a 4-3 loss to the Americans.  Allen forward Chad Costello registered three points (1 goal, 2 assists) to lead his current team past his former team and level the season series between Tulsa at Allen at three wins apiece.

LOOKING AHEAD
The Oilers will play three games in three days for the second consecutive weekend starting on Friday with a home ice tilt against the Wichita Thunder.  Tulsa is 0-1-0-1 against Wichita this season and holds a one point lead over the Thunder for third place in the Central Division race.  The Oilers and Thunder collide in Wichita on Saturday before the Oilers return to the BOK Center for the third meeting of the season with the Missouri Mavericks.

ONE GOES UP, ONE GOES DOWN
Last week, center Ben Walker was re-assigned to Tulsa from the Manitoba Moose while goaltender Jussi Olkinuora was recalled from Tulsa to Manitoba.  Walker appeared in two games for the Moose during his call-up and recorded two penalty minutes and a +1 rating.  Olkinuora posted a 2-3-1-1 record in seven starts for the Oilers this season to go along with a 2.80 goals against average and a .909 save percentage. 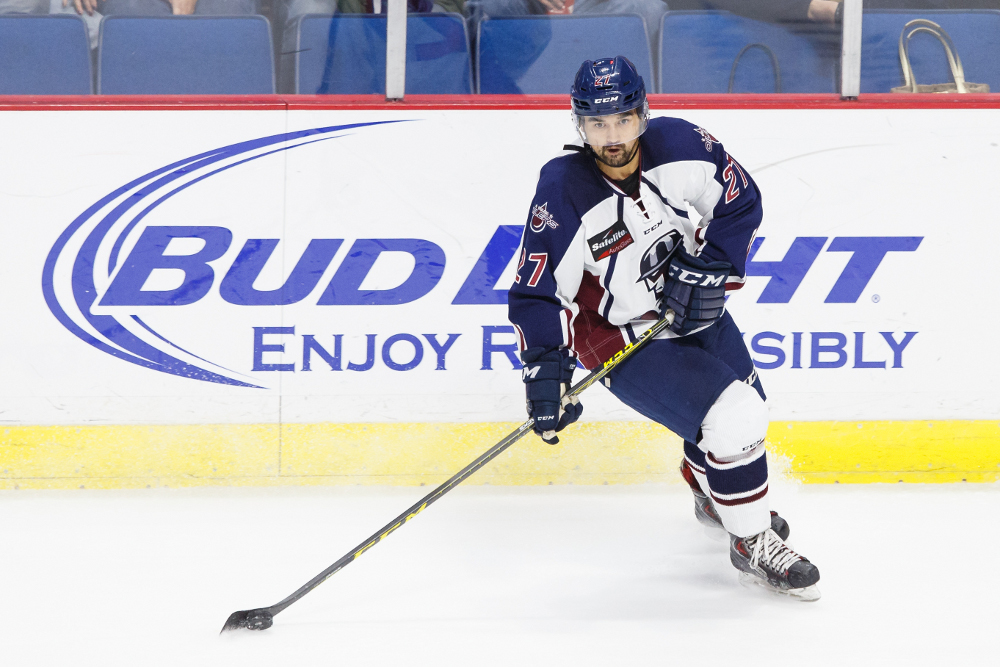 Dennis Brown (above) has been consistently setting up his teammates for success. (photo by: Kevin Pyle – www.photopyle.com)

HELPING HAND
Defenseman Dennis Brown is on a five-game assist streak and has dished out a total of eight helpers during in that span.  Brown’s run is the longest point streak and longest assist streak for any Oilers’ player this season.  The second-year pro out of Cypress California chipped in three assists in the Oilers’ win over Allen on Saturday night and is tied for fifth among all ECHL defensemen with nine assists on the season.  Since joining the Oilers three games into the season, Brown has recorded at least one point in eight of his 11 outings.

SLUMP BUSTER
After being held without a goal through the first 12 games of the season, Oilers’ winger Adam Pleskach found his scoring touch over the last two contests.  Saturday in Allen, the 27-year old notched the fourth hat-trick of his three-year career with one goal in the first period and a pair of strikes in the second period.  Pleskach found the back of the net on Sunday as well for his fourth goal in two games.  The Beausejour, Manitoba native is on a three game point streak (4 goals, 2 assists) and leads the Oilers with 14 points on the season. 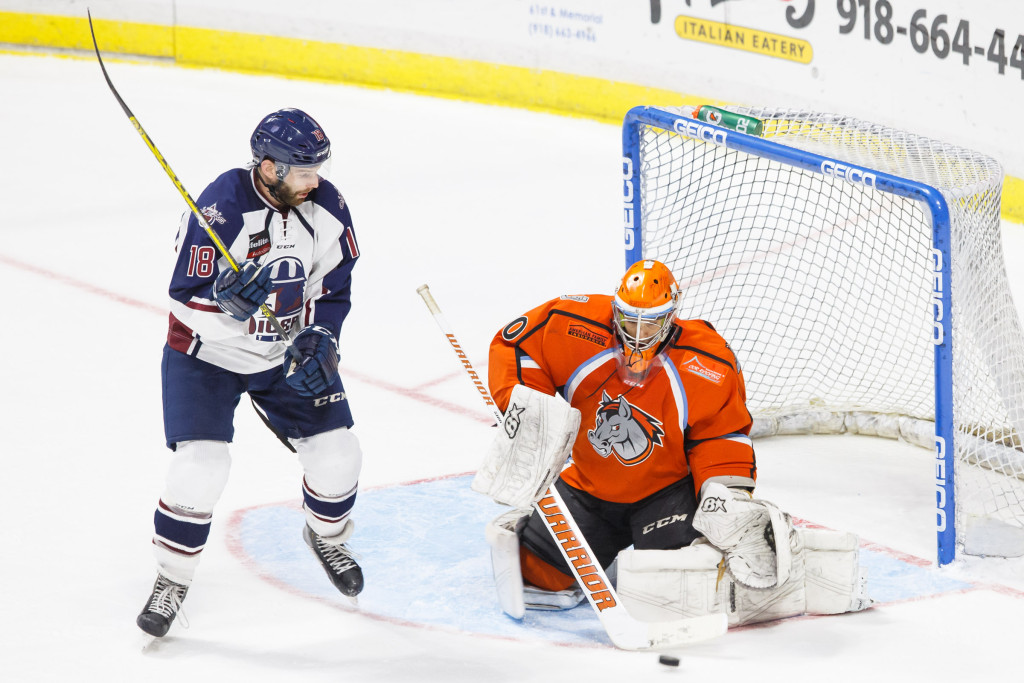 OFF TO A GOOD START
Rookie center Christophe Lalancette put up two points in all three games last weekend and has rolled up six points (2 goals, 4 assists) in his first five games as a pro.  A fourth-round draft pick of the San Jose Sharks in 2012, Lalancette scored his first career goal on Friday against Missouri.  Newly acquired forward Emerson Clark scored his first goal as an Oiler in his first game as an Oiler on Friday and followed up with a goal and assist on Saturday against Allen.

OFFENSE ON TRACK
In the third period against Missouri on Friday, the Oilers scored three goals in a single period for the first time this season and carried the offensive momentum into Allen on Saturday with three first period strikes against the Americans.  The Oilers have hit the back of the net 13 times in the last three games after scoring only eight total goals in the previous five contests.  The six-goal outburst on Saturday was the Oilers highest offensive output of the season and the five-goal win was the largest margin of victory this season.

SEIZING THE ADVANTAGE
The Oilers have scored power play goals in four of their last five games.  On home ice at the BOK Center, the Oilers are cashing in on nearly one out of every four power play opportunities (4-for-17) and overall, the Oilers rank 16th in the league with a 15.7-percent success rate with the man-advantage.

EXTRA DROPS
Center Kyle Bochek will play in his 100th game as an Oiler on Friday night against Wichita…Tulsa captain Nathan Lutz played in his 850thcareer game last Friday against Missouri…The Oilers are 0-7-1-0 when giving up the first goal of the game…Tulsa ranks eighth in the ECHL with an average of 2.64 goals against per game…The Oilers are 27th in the league with an average of just 25 shots per game.

Are you looking for Activities in Tulsa?