TULSA PREVAILS IN SHOOTOUT OVER ATLANTA

TULSA PREVAILS IN SHOOTOUT OVER ATLANTA 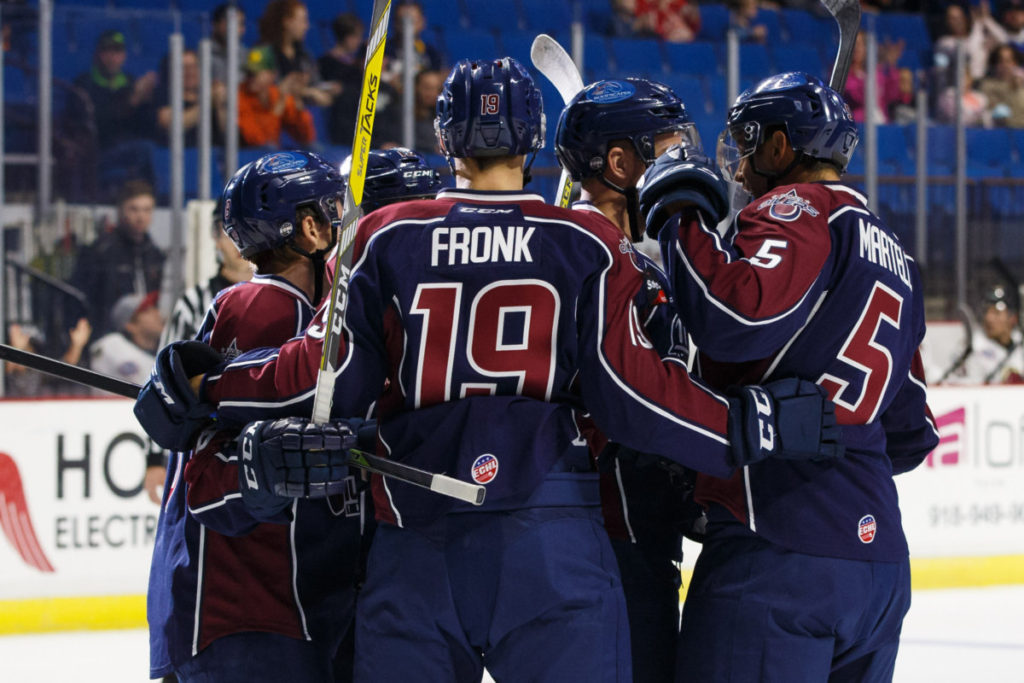 TULSA, OK – The Tulsa Oilers earned a dramatic 5-4 win over the Atlanta Gladiators  in front of 4196 fans at the BOK Center  to maintain their perfect record in their 65th season of hockey. Emerson Clark scored a goal in regulation and the lone goal in the shootout to help the Oilers to a 3-0-0 record.

Jiri Fronk sprung the Oilers out to an early first period lead, scoring just 1:51 into the game. Fronk’s goal, which was assisted by defensemen Brandon Martell and Jacob Poe, marked the second game in a row that the Oilers scored first.

Both teams would continue to feel each other out until the Gladiators capitalized on a neutral-zone turnover. The Gladiator’s goal was scored by Tyler Murovich at the 13:49 mark of the first period. Forward Thomas Frazee and defenseman Josh Atkinson were credited with the assists.

Pleskach got the scoring started early in the second period as he scored his third goal of the weekend. Pleskach’s goal which came off an Atlanta defender’s foot, came at the 5:56 mark of the period and was unassisted.

The line of Emerson Clark, Dan DeSalvo and Phil Brewer accounted for the Oilers’ third goal. Clark buried a saucer pass from Brewer, who received the puck from DeSalvo. Clark’s first goal of the season came at the 7:17 mark of the second period.

The Gladiators answered Clark’s tally just a few seconds later at the 7:55 mark of the period. Forward Eric Neiley buried his second goal of the season after Brock Higgs fed him with a no-look pass. Justin Buzzeo had the secondary assist.

Atlanta carried momentum into the second intermission when Murovich scored his second of the game with just five seconds remaining in the period. A.J White and Dalton Reum both recorded their first assists of the season on the play.

Derek Nesbitt, the Gladiator’s captain, took a feed from Bryan Cameron and Brock Higgs to score the go-ahead goal 5:08 into the third period. Nesbitt’s goal was his second of the season and came on the power play.

Oilers’ forward Danick Paquette made a statement in his Oilers debut at the 12:47 mark of the third period. Paquette’s tying goal was assisted by Cunningham and Brewer.

The remainder of regulation would yield no more scoring and both rookie goaltenders headed to their first professional overtimes. The three-on-three overtime would also remain scoreless, sending the game to a shootout.

The dramatic game had a dramatic finish as Phillips and Vladar stopped the initital five shots of the shootout. Oiler Emerson Clark scored on the Oilers’ sixth attempt and Phillips denied Atlanta’s veteran sixth shooter Murovich to win the game.

Tulsa’s victory makes them a perfect 3-0-0 this season. The Oilers will face the Gladiators tomorrow at 4:05 p.m. in the BOK Center. Fans will be able to skate with the Oilers after the completion of Sunday’s game.