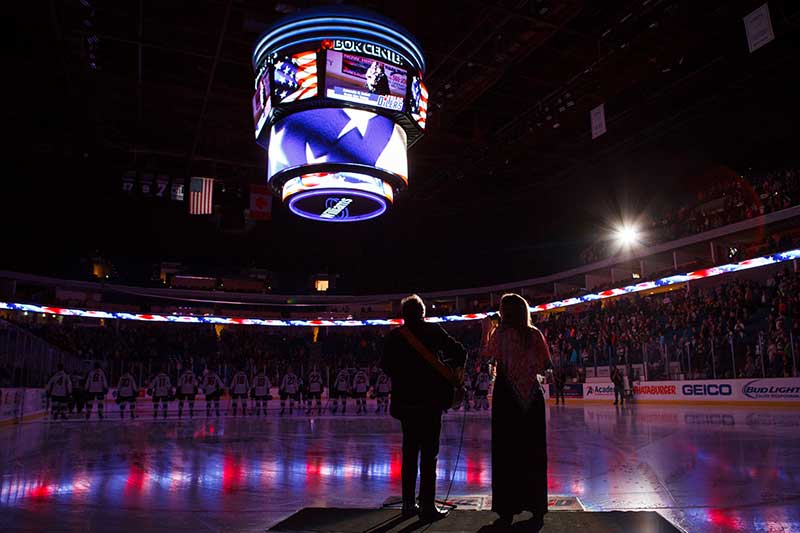 Tulsa natives Jubal and Amanda from the hit show “The Voice” perform the National Anthem on Friday night at the BOK Center. (photo by: Kevin Pyle – www. photopyle.com)

WEEK IN REVIEW
In the season opener against Wichita on Friday night, the Oilers clawed their way back from a 2-0 third period deficit but ultimately fell short in a 3-2 setback.  Brady Ramsay scored the game-tying goal with 1:28 remaining in the third period, but just nine seconds later, a tricky bounce of the puck off the end boards in the Oilers zone allowed Thunder forward Kenton Miller to net the game-winner.

Saturday in Allen, the Oilers fired 28 shots on goal but went 0-for-8 on the power play and dropped to 0-2 with a 4-2 loss to the Americans.  Former Oiler Gary Steffes registered a goal and an assist for Allen while Tulsa forwards Darian Dziurzynski and Brian Nugent scored their first goals of the season.

In the second half of the weekend home-and-home series with the Americans, the Oilers picked up goals from Matt Konan, Brandon Wong, and Brady Ramsay to earn their first win of the season.  Jason Christie picked up his first victory as Oilers’ head coach and Tulsa goalie Jussi Olkinuora turned in a 31-save performance for his first “W” of the season. 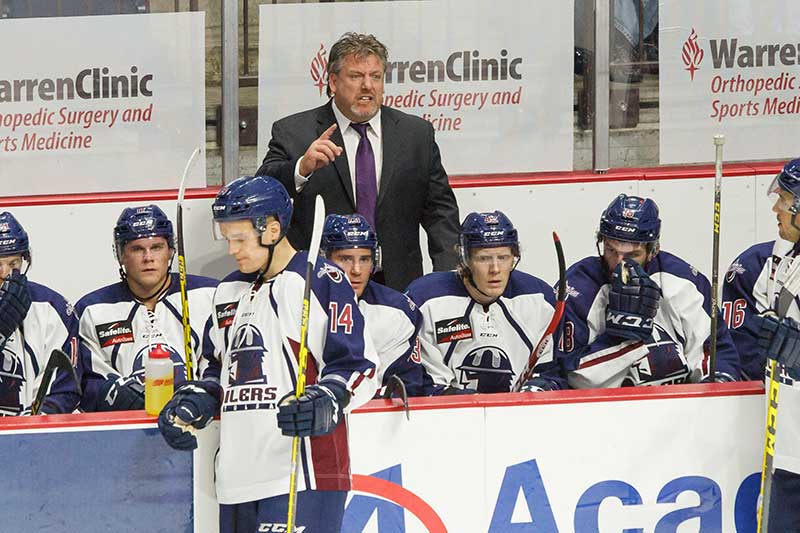 BUSY START
The Oilers played three games in three days to open a season for the first time since 2004.  Tulsa was one of only four teams (Alaska, Allen, and Missouri) in the ECHL to play a game on Friday, Saturday, and Sunday of opening weekend.

RAMMER REMAINS
The Oilers lost one “Rammer” in the offseason as former head coach Bruce Ramsay departed for the AHL, but the Oilers kept another “Rammer” as forward Brady Ramsay returned for a second season in Tulsa.  The Calgary, Alberta native is the only Oiler to record a point in each of the first three games of the season.  Ramsay scored the game-tying goal on Friday, chipped in an assist on Saturday, and potted a long-distance empty net goal to seal the Oilers’ win on Sunday.

NEW BLUE LINE PRESENCE
Defenseman Connor Kucera signed with Tulsa on Sunday and made his Oilers debut on the same day.  A 6-foot-2, 205-pound rookie out of Twin Lakes, Indiana, Kucera played four seasons of college hockey at Bowling Green State University before making his first pro appearance with the Fort Wayne Komets during the 2015 Kelly Cup Playoffs.

CONSISTENT-“C”
Prior to the home opener on Friday, veteran defenseman Nathan Lutz was voted team captain by his teammates.  The 37-year old will wear the “C” on his sweater for the third consecutive season.  Lutz, is in his 15th season of pro hockey and has not missed a single game (regular season or playoffs) since arriving in Tulsa in 2013.

KILLING TIME AND PENALTIES
Through two games, the Oilers have faced 14 opposing power plays and allowed just one goal.  The only blemish on the Oilers’ penalty kill record occurred Saturday in Allen when the Americans, already on the power play, scored with an extra attacker (6-on-4) before the Oilers could touch the puck on a delayed penalty call.

ON THE PLUS SIDE
Forwards Ben Walker and Brian Nugent are the only Oilers’ players to record a plus rating in each of the first three games.  Walker, a 22-year old center from Edina, Minnesota, scored the Oilers’ first goal of the season on Friday on was on the ice for three of Tulsa’s first four goals of the year.  Nugent, who played last season with the Cincinnati Cyclones, scored his first goal as an Oiler on a third period breakaway in Allen on Saturday night.