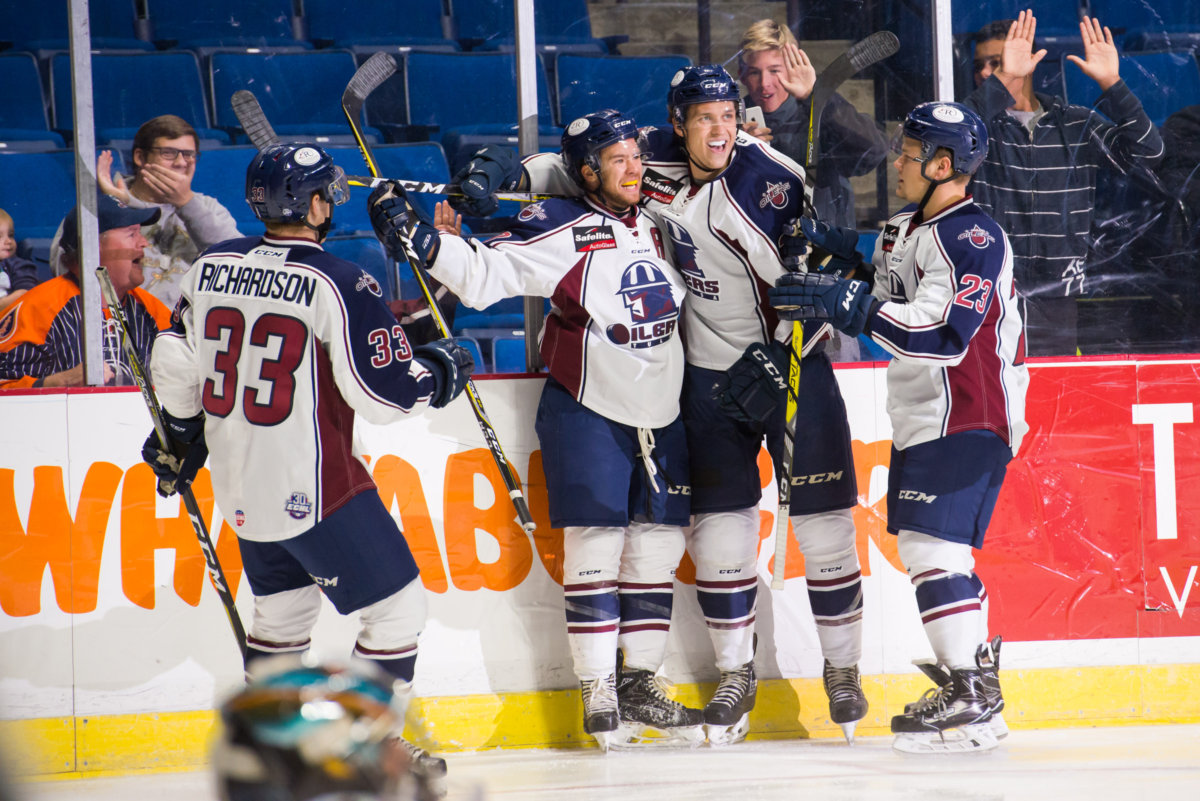 >> Wichita came to the York Plumbing Ice at the BOK Center and took the first meeting of the season in the Stonewolf Casino Cup rivalry. The Thunder jumped out to a 1-0 lead in the first five minutes of the game and added two more in the second period, one of which was a buzzer-beating breakaway to open their lead to 3-0. Evan Richardson scored for the Oilers in the third period, but Tulsa fell 3-1.

>> Tulsa won a hard-fought battle with Allen in the first of three matchups over the weekend between the two longtime rivals. Dylan Hubbs scored first for the Oilers and finished with two points (1g, 1a) as the game’s Number 1 Star. After the Americans tied the score at 1-1, Eric Drapluk added a power play goal and Charlie Sampair contributed a short-handed breakaway goal to put Tulsa in front 3-1. Allen cut their deficit to one, but Conner Bleackley buried another short-handed goal which was just enough insurance. The Americans made it interesting down the stretch, but Devin Williams made 35 saves in preserving his second win of the season.

>> In the BOK Center rematch, Devin Williams outdueled Stephon Williams to earn his first professional shutout and third straight win to start his career. Williams stopped 45 Allen shots in leading Tulsa to a second straight victory over the Americans. Adam Pleskach broke a scoreless deadlock to give the Oilers the game’s first lead 6:16 into the third period. Kale Kessy added an empty net goal in the final minute.

>> The Oilers complete a weekend sweep of the Americans in the lone game in the Lone Star State. Tommy Vannelli scored a power play goal and Conner Bleackley added a short-handed goal to take a 2-0 lead in the first half of the first period. Allen cut into Tulsa’s lead with a power play goal before the first break, and after a scoreless middle frame, tied the game at 2-2 with 6:34 left in regulation. Charlie Sampair put the Oilers back in front with 3:02 to play, but Eric Roy scored with 30 seconds left for the Americans to force overtime. Tulsa captain Adam Pleskach buried a rebound with 22 seconds left in the extra period for his second straight game-winning goal.

Oilers captain Adam Pleskach scored the game-winning goal both Friday and Saturday against Allen and now has four goals this season. The longest-tenured Tulsa player now has 114 goals in 262 games with the Oilers.

Come out to FlyingTee from 6-7pm Monday, October 30 for the Tulsa Oilers Coach’s Show, featuring Head Coach Rob Murray. Oilers defensemen Chris Joyaux and Eric Drapluk will also be guests on the show. For those unable to make it, the show can be heard on The Sports Animal (99.9FM/1550AM) or www.tulsaoilers.com.

Tulsa will wear special denim-themed jerseys Saturday, when the Oilers host the Utah Grizzlies at 7:05pm on the York Plumbing Ice at the BOK Center. The jerseys, sponsored by Drysdales Western Wear, will be different from the denim jerseys worn last season, and will be auctioned off after the game at the OneOK Club.