Tulsa travels to Boise this week after finishing season-opening eight game home stand with at least one point in every game. 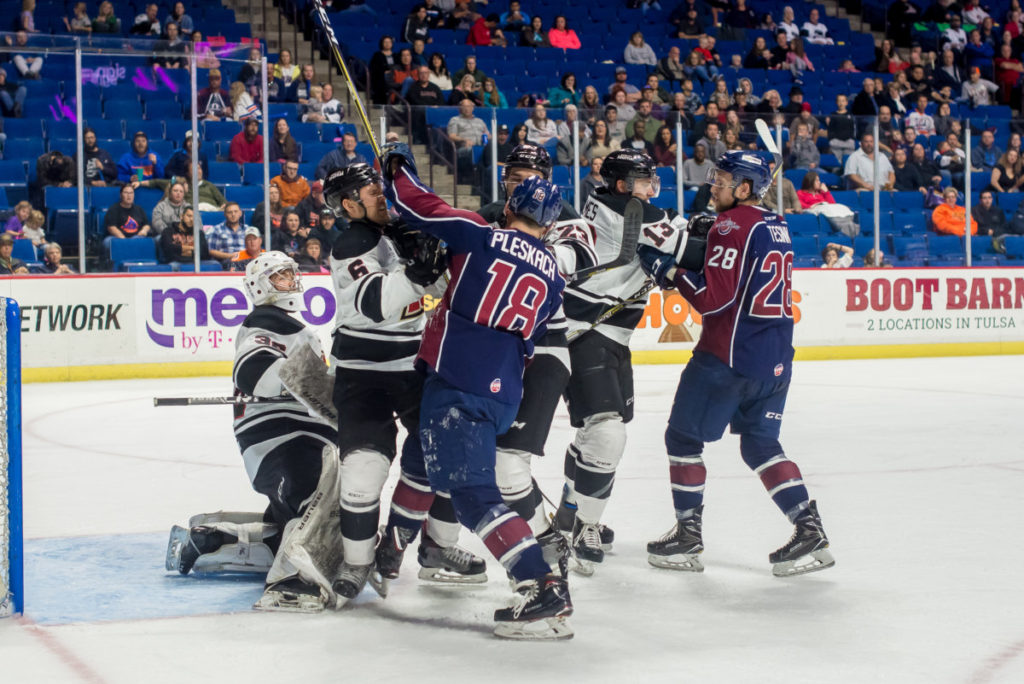 >> The Tulsa Oilers started a stretch of three games in three nights against the Rapid City Rush by battling back from two different one-goal deficits. After a scoreless first period Thursday, the Rush broke a scoreless deadlock with 5:51 left in the middle frame. Rookie forward Austin Poganski answered with a tying goal for Tulsa, but Rapid City moved back into the lead 43 seconds into the third. Oilers captain Adam Pleskach tied the game at 2-2 with 4:05 left in regulation to force overtime, but Rush forward Pierre-Luc Mercier went coast-to-coast to win it for Rapid City 1:28 into the extra period.

>> Rapid City grabbed an early lead with a wraparound goal 1:55 into the game Friday, but Terrance Amorosa recorded his first pro goal on a shot from the point to tie things up with 3:54 left in the opening stanza. Tulsa led at the first break after Austin Poganski scored his second in as many nights just 32 seconds before the buzzer. Rush veteran Garrett Klotz jammed home an equalizer towards the end of the second period, and after a scoreless third period and overtime, the game went to a shootout. Tulsa had two chances to close out Rapid City in the nine-round shootout, but at the end, the Rush pulled out the 3-2 win.

>> In the series finale, the Oilers took a 1-0 lead with 48 seconds left in the first 20 minutes when Kyle Rhodes blasted a shot into the net from the point. Peter Sivak added to Tulsa’s advantage with a power play goal 2:06 into the second, but the Rush cut the Oilers lead back to one past the midway point. Tulsa grew its lead to 3-1 with 4:26 to play in the middle frame on a goal from Adam Pleskach, but Rapid City forward Andrew Radjenovic answered with his second of the period to make it 3-2 after 40 minutes. The Rush dramatically tied the game at the third period buzzer to force overtime, and scored on a 4-on-3 power play in the extra frame to stun the Oilers again.

The Oilers finished their season-opening eight game home stand 4-0-4, earning 12 out of a possible 16 points and ending the week near the top of the Mountain Division. After a four-game road swing, including a trip to Boise this week for three games against the Idaho Steelheads and a single day trip to Texas for a battle with the Allen Americans, Tulsa returns home November 17 for a 7:05pm rematch with the Americans on Tulsa 918 Night at the BOK Center. The Oilers will wear special jerseys bearing resemblance to the Tulsa flag, which will be auctioned off following the game.