Tulsa wins all four games to move within one point of first place in the Mountain Division. 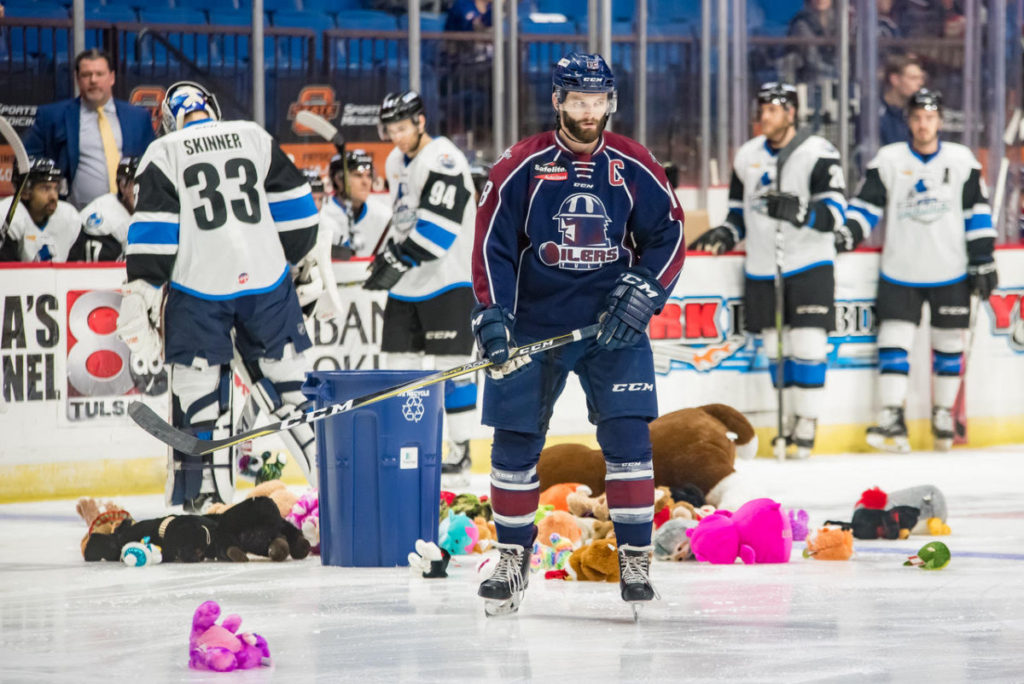 >> The Tulsa Oilers started a busy holiday week with a fast start against the Wichita Thunder in the first of three straight chapters to the StoneWolf Casino Cup rivalry Tuesday. Ian McNulty potted his first professional goal on a breakaway 3:02 into the game, and Adam Phillips added a power play tally to give Tulsa a 2-0 lead. Wichita answered with a power play goal of their own late in the first period and tied the score at 2-2 just 5:37 into the middle stanza, as the teams skated to the second period buzzer all square. Oilers defenseman Steven Kaunisto broke the deadlock 3:53 into the final period and gave Tulsa the lead for good, as Tyler Soy scored his first pro goal shortly thereafter to complete the 4-2 win.

>> The series shifted to Wichita on Thanksgiving Eve, where again the Oilers jumped out to a 2-0 lead thanks to a first period breakaway goal by Roman Ammirato and a second period one-timer from Ryan Tesink. The Thunder answered with two goals of their own to breakeven after 40 minutes at INTRUST Bank Arena. Tesink setup Tyler Soy for the game-winning marker 3:34 into the third period, and Scott Henegar added an insurance goal nearly three minutes later as the Oilers cruised to their third straight win over the Thunder to start the season series. Alex Kromm added an empty net tally, as Evan Fitzpatrick won his fourth straight start.

>> Following two days off for Thanksgiving and Black Friday, the Oilers returned home for the finale against the Thunder and fell behind 1:43 into the game. Tulsa captain Adam Pleskach scored just 26 seconds later to the score at 1-1 with the Oilers’ Teddy Bear Toss goal. Wichita regained the lead before the end of the period, but Ryan Tesink notched a power play tally early in the middle frame to make it 2-2, and Jared Thomas scored on a short-handed breakaway to briefly put Tulsa in the lead. The Thunder answered with their second power play strike of the game to force a 3-3 tie entering the third, but Dylan Bredo ripped a one-timer into the net with 4:27 remaining to put the Oilers ahead for good. Tyler Soy added an empty net goal late to complete his third straight multi-point game. Evan Fitzpatrick started his third straight game and earned his sixth win of the season.

>> The Oilers finished off the four-game holiday week Sunday afternoon with a 3-2 win over the Kansas City Mavericks. Tulsa fell behind 1-0 early, but Jared Thomas tied the game 1-1 with his second goal in as many nights, and Ian McNulty re-directed a shot from the point for a power play goal to put the Oilers in front. Kansas City pulled even at 2-2 before the first period buzzer, but Kyle Rhodes blasted home the game winning goal late in the second period and the Oilers held the Mavericks at bay the rest of the way in the third to move within one point of first place in the Mountain Division.

Evan Fitzpatrick is fourth in the ECHL with a 2.19 goals-against average, which is best among rookie goaltenders. He also has the second best save percentage (.922) and second most wins (6) among rookies…Steven Kaunisto has the fourth best plus/minus rating (+11) among ECHL defensemen, including the best mark in the Western Conference…Kyle Rhodes has the second most goals (6) among ECHL defensemen…Jared Thomas is 16th among ECHL rookies with 13 points (5g, 8a) in just 13 games.