OILERS LOCKED IN A TIGHT RACE WITH FIVE GAMES REMAINING

Tulsa starts and finishes a rollercoaster week with wins to claim fourth place in the Mountain Division with two weeks left. 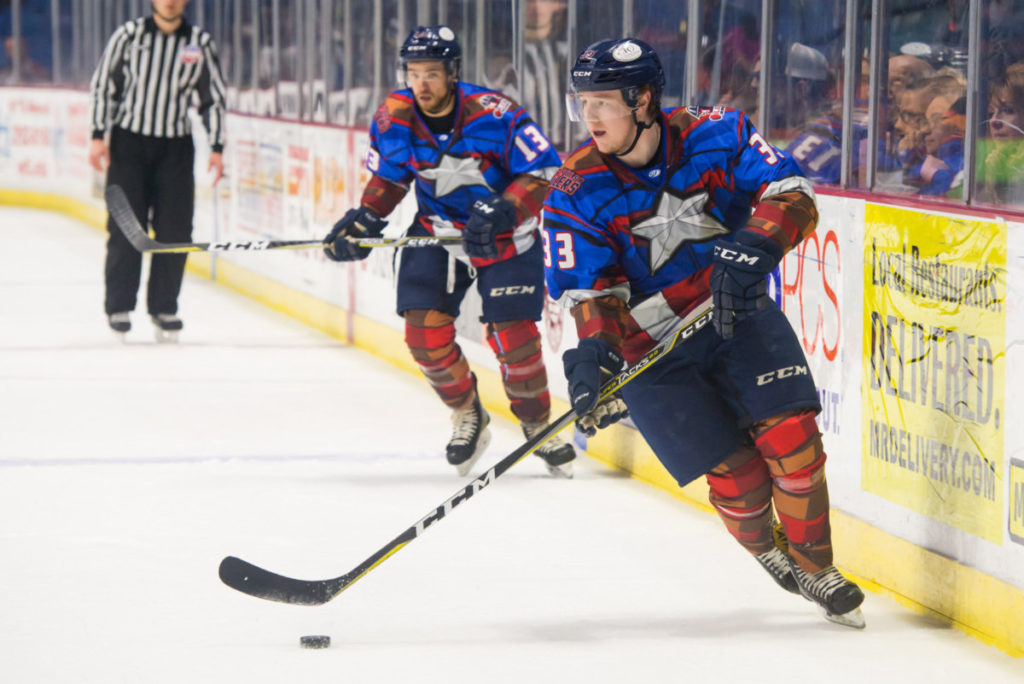 >> Tulsa and Allen finished off a 13-game season series Wednesday at the Allen Event Center competing for the fourth and final playoff spot in the Mountain Division. Dylan Hubbs put Tulsa on the board 4:33 into the game, but the Americans evened the score at 1-1 before the first break. After a scoreless second period, Ryan Tesink tallied back-to-back goals in the first 6:08 of the third, including the eventual game-winner on a 5-on-3 power play to put the Oilers up 3-1. Allen scored with 17 seconds left to cut their deficit to one, but it was too little, too late as Tulsa took the season series 7-4-2.

>> The Mallards pulled out in front in the first game of the weekend when Alex Globke scored 10:40 into the first period. Alexandre Ranger tied the game midway through the second period, but the Mallards regained the lead when Jamie Tardif scored off of a faceoff win late in the middle frame. Tardif added a second goal 7:25 into the third period to make it 3-1, forcing Tulsa into an uphill climb. The Oilers received a late power play and pulled the goaltender for an extra attacker, but didn’t manage to score until it was too late. Steven Kaunisto’s shot from the point with 8 seconds left made it 3-2, but Quad City pulled the upset.

>> The Oilers players and fans were left stunned and speechless in a heartbreaking 2-1 loss Saturday to the Mallards with an opportunity to at least gain a point in a game destined for overtime. Following 35-plus minutes of scoreless action, Dmitry Osipov put Quad City ahead with 4:39 left in the second period. Just past the halfway point of the third period, Oilers captain Adam Pleskach found the equalizer on a wraparound. Shortly after a successful Tulsa penalty kill in the final minute of regulation, the Mallards played spoiler again as Gergo Nagy snuck a shot into the net out of a goal-mouth scramble with 2 seconds left to beat the buzzer.

>> In the season series finale against the Mallards, Charlie Sampair gave Tulsa a 1-0 lead a little over 6 minutes into the first period. Chris Izmirlian tied it for Quad City just 1:23 later and the stalemate ensued for the remaining of the first period and all the way through the second stanza. 32 seconds into the third period, rookie Roman Ammirato scored his first pro goal to put the Oilers back in front with what turned out to be the game-winner. Jake Hildebrand stopped 21 of 22 shots for his 15th win of the season.

The Oilers sit in fourth place in the Mountain Division heading into the final two weeks of the season. Tulsa has 5 games remaining (Fri. at Wichita, 4/2 at Kansas City, 4/4 vs Idaho, 4/6-4/7 vs Rapid City). The Oilers are 3 points behind Wichita for third and Tulsa holds the tiebreaker over Allen for fourth…Wichita also has 5 games remaining (Wed. at Allen, Fri. vs Tulsa, 4/3 vs Allen, 4/6-4/7 at Colorado)…Allen has 6 games left (Wed. vs Wichita, Fri.-Sat. vs Colorado, 4/3 at Wichita, 4/6-4/7 vs Idaho).