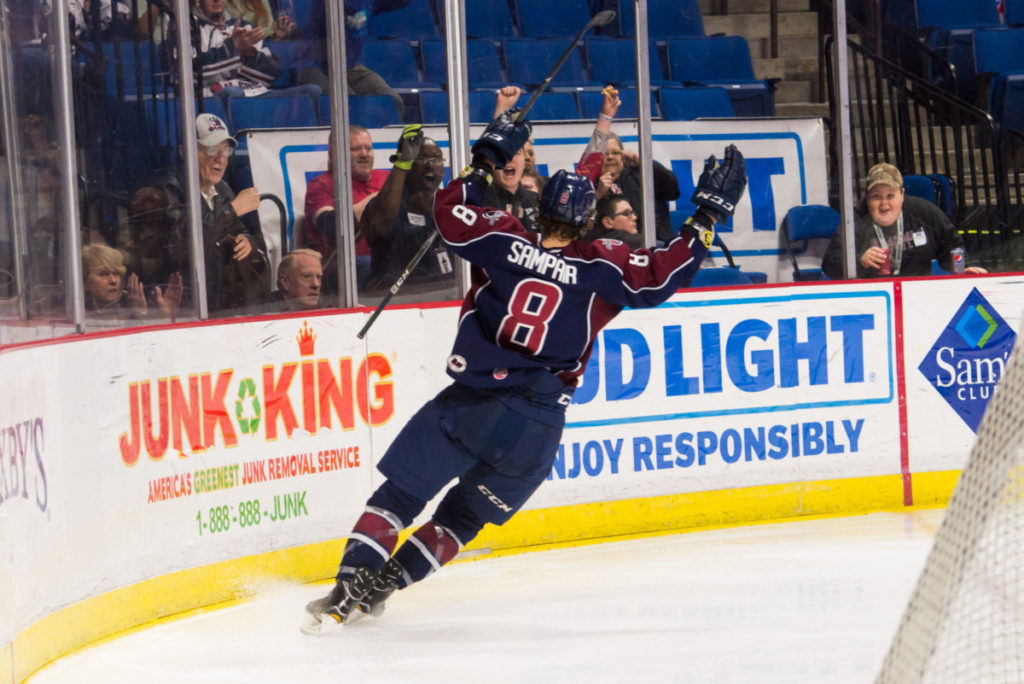 The Tulsa Oilers overcame a 1-0 deficit at the start of the second period to knock off the top team in the ECHL 3-1 Friday in the first meeting with the Florida Everblades since January 2015. Stephen MacAuley put the Everblades on the board first late in the opening frame, but Garrett Ladd tied the score with a blast from the point on a second period power play. Captain Adam Pleskach found the net for the game-winning goal in the first seven minutes of the third, and Charlie Sampair added an empty net goal. Goaltender Devin Williams stopped 28 of 29 in the win for Tulsa.

It took 39:12 of game action, but Garrett Ladd broke a scoreless deadlock with a short-handed breakaway goal with 48 seconds left in the second period to put the Oilers ahead in the rematch against the Everblades Saturday. Ladd added a power play marker 23 seconds into the third to put Tulsa up 2-0, and helped setup Charlie Sampair for the third Oilers goal at 4:59 of the final stanza. Devin Williams turned away all 26 Florida shots to earn his league-leading third shutout of the season.

In the weekend finale, the Oilers fell behind in the first three minutes of play, when Robin Press put the Fuel on the board first. But Charlie Sampair went on to pick up a natural hat trick with two goals in the first period and another 2:32 into the middle frame to give Tulsa a 3-1 lead and spark of stretch of six consecutive goals. Conner Bleackley recorded the Oilers’ fourth goal, and Ryan Tesink made it 5-1, before Indy swapped out goaltender Etienne Marcoux for backup Matt Tomkins. Kale Kessy snuck in the sixth goal for Tulsa before the end of the stanza. Just over a minute into the third period, Oilers goalie Devin Williams was shaken up on a goal-mouth collision and could not return, leaving emergency backup goaltender Ian Keserich to man the net the rest of the way. Indy managed just one goal on 11 shots against the 32-year-old former Oiler who had been retired since the 2012-13 season, as Tulsa cruised to a 6-2 victory.

Tulsa’s line of Garrett Ladd, Charlie Sampair and Adam Pleskach scored the Oilers’ first 9 goals of the weekend, picking up all three goals Friday in the 3-1 win over Florida, three more Saturday in a 3-0 shutout over the Everblades, and the first three Sunday in a 6-2 win against Indy. Ladd finished the week with 8 points (3g, 5a), Sampair ended up with 6 points (5g, 1a), and Pleskach finished with 4 points (1g, 3a).

The Tulsa Oilers will celebrate Military Appreciation Night, presented by Budweiser, Friday at 7:05pm against the Colorado Eagles at the BOK Center. The Oilers will be donating tickets to local military and veterans organizations, and will wear special jerseys that will be auctioned off after the game.

The first 1,000 kids under 12 who enter the BOK Center on Saturday will receive a Tulsa Oilers youth jersey, courtesy of York Plumbing. Gates open at 6pm for the Oilers’ 7:05pm game against the Colorado Eagles.