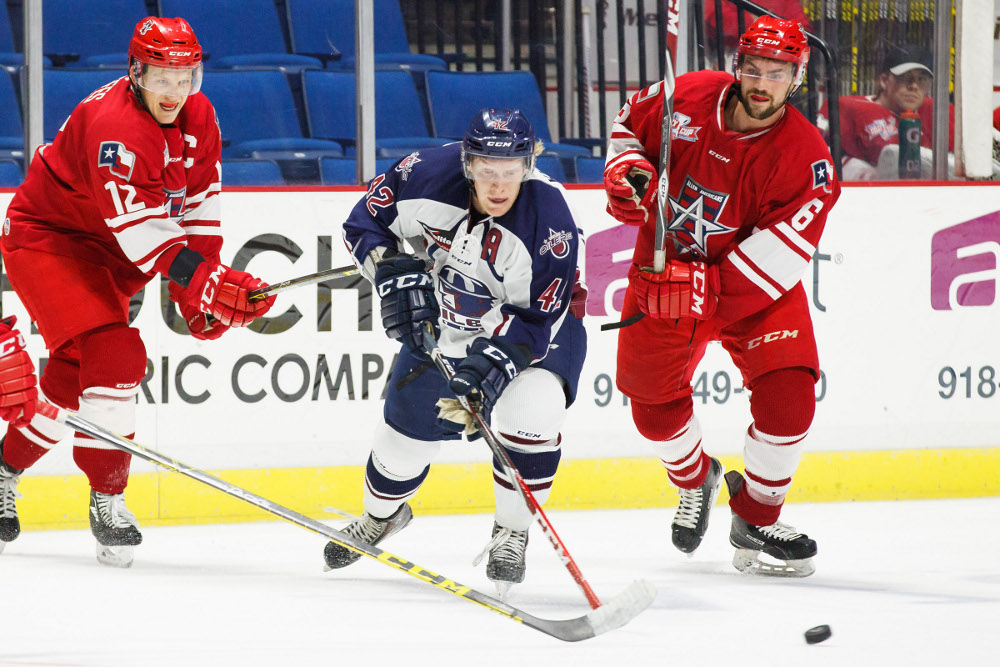 Jordan Kremyr (above) slices between two Allen defenders during first period of the Oilers’ 3-1 win on Tuesday night at the BOK Center. (photo by: Kevin Pyle – www.photopyle.com)
TULSA, OK – Jordan Kremyr skated the first six games of the season without recording a point but ended his drought just 11 seconds into Tuesday’s tilt against the Allen Americans.  The 29-year old winger scored on his first shift of the night and went to tally a pair of assists in the Oilers 3-1 triumph over the Americans in front of 3,969 at the BOK Center.  Tulsa improved to 4-3-0-0 and moved above the .500 mark for the first time this season with a second consecutive victory.
Seconds after the opening face off, Oilers’ forward Adam Pleskach knocked down a clearing attempt by Americans’ goalie Riley Gill.  Pleskach fired the puck off the pad of Gill and Kremyr swooped in to bat home the rebound while most of the fans were still settling into their seats.  With five minutes remaining in the first frame, Kremyr set up defenseman Joe Sova for a shot from the point that was deflected past Gill by the stick of Phil Brewer to give Tulsa a 2-0 cushion.  Gill, making his first appearance of the season, was beaten twice on 10 shots in the opening 20 minutes as Kremyr notched his first goal of the season and Brewer registered his third goal of the year.
The Oilers only defensive lapse of the night occurred early in the second period when Allen defenseman Justin Baker found open ice near the bottom of the right face off circle and snapped a shot past Tulsa goalie Kevin Carr.  The home squad restored its two-goal advantage at 6:52 of the middle frame thanks to Kremyr’s second set up of the evening.  The Cloverdale, British Columbia native cranked a slap shot toward the Allen net that caromed off a defender’s stick and was re-directed past Gill by a hard-charging Nathan Lutz.  The Oilers’ captain scored his first goal of the season and Kremyr ran his rating for the game to +3.
In the third, Carr turned aside all seven shots he faced to preserve the lead and the win.  The Oilers held the Americans to only 17 shots on net and successfully killed off all three Allen power play opportunities.  Forwards Ben Walker and Mathieu Gagnon each dropped the gloves with bouts in the first and second period respectively as the Oilers tasted victory for the third time in the last four outings. Tulsa is now 2-1 on the season against its Central Division rival and will battle the Americans on three more occasions in the month of November.
The Oilers visit the Colorado Eagles on Friday and Saturday night with both contests slated for 8:05 p.m. Central Time.
Final Boxscore
Are you looking for Things To Do in Tulsa?