29-year-old winger comes to Tulsa for ninth pro season after playing part of 2016-17 with Alaska Aces. 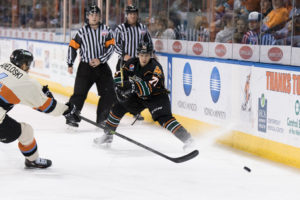 Nikiforov, 29, brings a wealth of experience to the Oilers roster. The winger from Hauppauge, NY enters his tenth pro season in 2017-18 and Tulsa is his seventh ECHL team. Nikiforov finished last season with MAC Budapest in the Erste Liga, composed of teams based in Hugary, Romania and Austria. He totaled 18 points (7g, 11a) in 18 regular season and playoff games. Prior to heading overseas, Nikiforov appeared in 14 games for the Alaska Aces and recorded four points (2g, 2a).

Prior to turning pro, Nikiforov played three seasons of juniors in the Ontario Hockey League, where he recorded 173 points (63g, 110a) in 179 games with the Barrie Colts and Sarnia Sting.