Oilers complete 7-point week with second straight 5-3 win over Thunder in the first game of 2017.

TULSA, OK – The Tulsa Oilers finished off a four-game home stand with a second consecutive 5-3 victory over the Wichita Thunder on New Years Day at the BOK Center. With the win, the Oilers picked up seven out of a possible eight points this week ahead of the team’s longest road trip of the season. 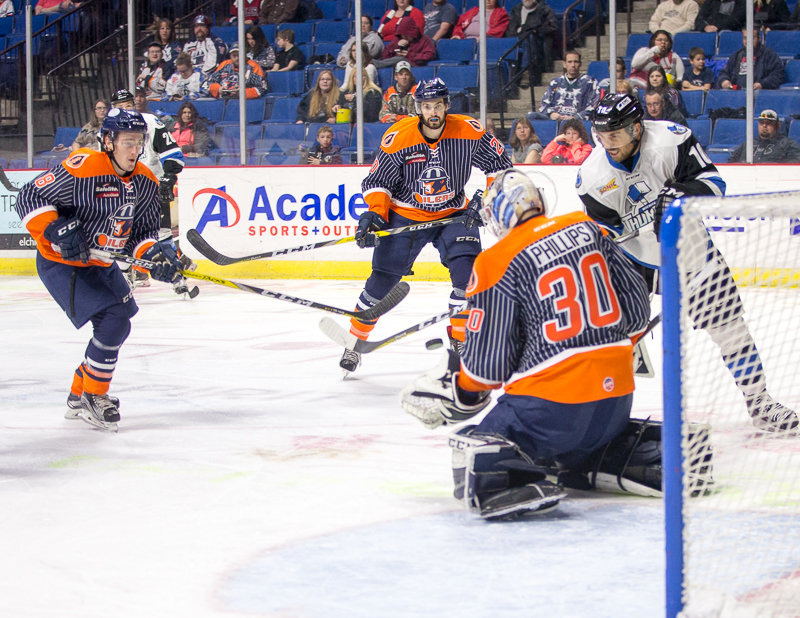 Wichita jumped out to a 1-0 lead for the second straight night, when Ian Lowe snapped a shot past Oilers goaltender Jamie Phillips from the right circle at the midway point of the first period. Tulsa evened the score when Thunder goalie Peter Di Salvo got caught out of his net and Oilers forward Phil Brewer capitalized with a wraparound goal.

In the second period, Christophe Lalancette stole the puck from a Wichita defenseman and scored on a breakaway to give Tulsa its first lead of 2017. The Thunder responded when Gerrad Grant sent a quick shot from the top of the left circle off the post and into the net to make it 2-2.

It was all Tulsa after that, as the Oilers tallied three unanswered goals to finish the second period ahead 5-2. First, Shawn Bates buried a rebound on a 4-on-3 power play to make it 3-2. Tyson Wilson then ripped a shot past Di Salvo into the top corner 26 seconds later to double the lead. Kale Kessy finished off a four-goal frame by tipping a point shot into the net on another Oilers power play with 13 seconds left.

Lowe found the net a second time early in the third period to cut into Tulsa’s lead, but Phillips was solid in the net down the stretch to put a stamp on his league-leading 18th goal of the season. The Oilers’ power play went 2-for-6 in the game and the penalty kill was a perfect 5-for-5.

The Oilers hit the road now for a season-long eight game road trip over a 14-day span that reaches seven different ECHL cities. The trip begins with a Tuesday night game in Charleston, SC at 6:05pm CST against the South Carolina Stingrays. It will be the only meeting between the two teams this season.