Tulsa explodes for six goals to open 65th season of Oilers hockey in Green Country, moves to 2-0 to start the season.

TULSA, OK – The Tulsa Oilers earned a convincing 6-1 win over the Indy Fuel Friday in front of 5,592 fans at BOK Center  to open the club’s 65th season of hockey. With the win, Tulsa moved to 2-0 to start the season. The Oilers special teams were pivotal in the victory, as Tulsa scored two power-play goals, a short-handed tally, and killed all five Indy man-advantages.

Alternate Captain Adam Pleskach gave the Oilers an early lead, when he buried his own rebound on an odd-man rush 1:10 into the game. The Fuel answered quickly, when Tyler Currier snapped a quick shot past Tulsa goaltender Jamie Phillips from a blocked shot that caromed out to him in the slot. Tulsa killed off a big 5-on-3 situation late in the frame, but the Oilers were unsuccessful on three power-plays of their own. 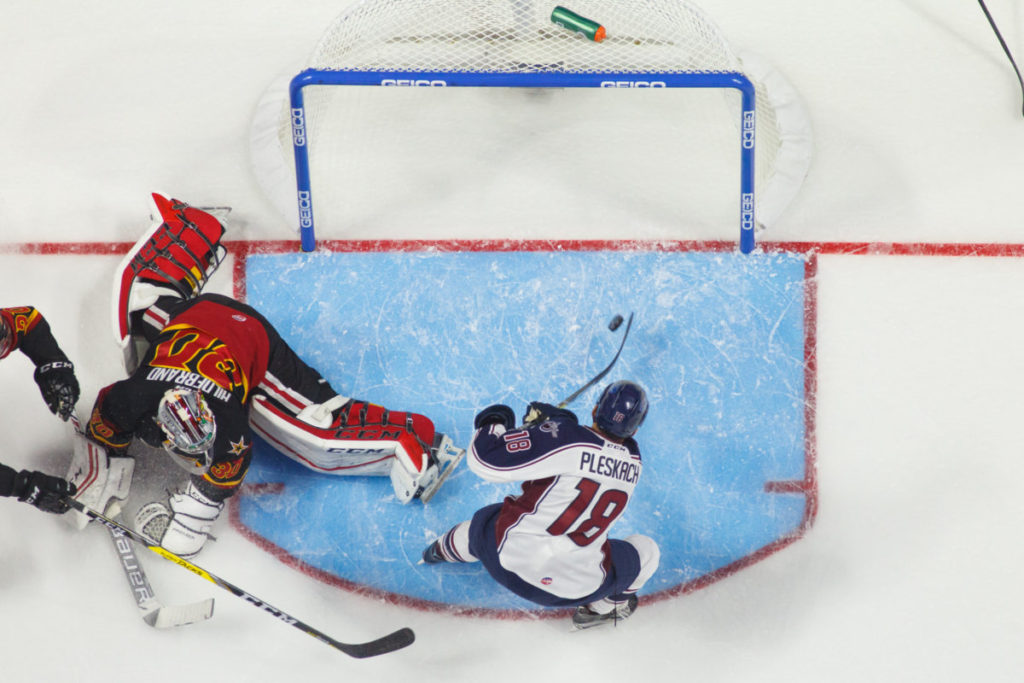 The Indy Fuel take on the Tulsa Oilers at the BOK Center October 21, 2016 in Tulsa, Oklahoma. Photo / Kevin Pyle

Tulsa came out of the gate fast and furious in the second period. Rookie forward Darcy Murphy continued his hot start with a pair of power-play goals to put the Oilers ahead 3-1 just over five minutes into the frame. Then while short-handed for four minutes, the Oilers padded their lead when Dan DeSalvo stole the puck away from a Fuel defenseman and beat Indy goalie Jake Hildebrand on a breakaway. Tulsa led 23-17 in shots through two periods.

Pleskach struck a second time to bump the lead up to 5-1 just 4:49 into the third period, and Shawn Bates added his second of the season late for the sixth Oilers marker. Phillips made several key saves in his second professional start and finished with 21 on the night to move to 2-0 in his young career.

Tulsa is back it Saturday night, when the Atlanta Gladiators come to the BOK Center for the first of two games. The puck drops at 7:05pm, and the Oilers will hold their annual “Adopt-An-Oiler Jersey Auction” after the game. The two teams will meet again Sunday at 4:05pm, and fans will be able to skate with the players on the ice afterwards.