THIRD PERIOD SURGE NOT ENOUGH TO PUSH OILERS PAST MAVS 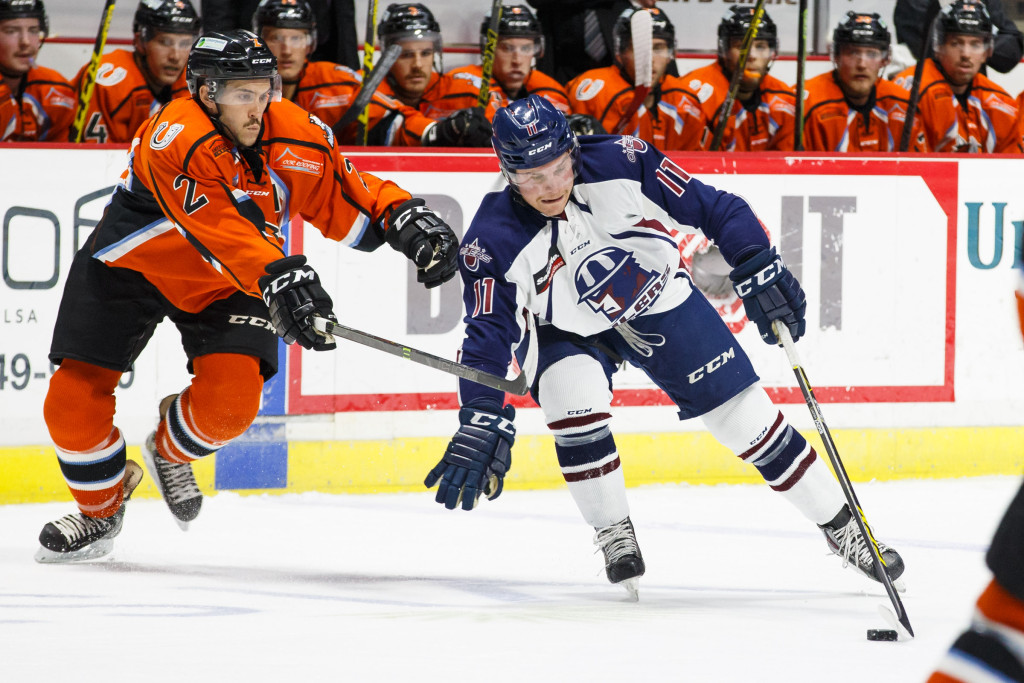 TULSA, OK – The Tulsa Oilers clawed their way back from a three-goal deficit on Friday night only to fall short in a 5-4 overtime loss to the Missouri Mavericks in front of 5,608 at the BOK Center.  Mavericks’ forward Rocco Carzo deposited the game-winning goal off an odd-man rush at the 2:37 mark of the extra session to propel his squad to a seventh straight win and keep the Oilers winless in their last five outings.
Missouri struck first at 6:38 of the first period when Sebastien Sylvestre pushed a rebound under Tulsa goalie Jussi Olkinuora.  The Oilers equalized at 17:28 on a rebound strike of their own from newly acquired forward Emerson Clark.  A Tom Kroshus slap shot caromed off the back boards to Clark who pounced on the loose puck and slammed home his first goal as an Oiler in his first game in Tulsa.
Early in the middle frame, the Mavericks surged back in front after Kellen Jones finished off a centering pass from Jesse Root by chipping the puck over the outstretched pad of Olkinuora.  Six minutes later, with Tulsa defenseman Nathan Lutz serving a holding minor, a pass from Root across the Oilers’ crease connected with a wide open Tyler Barnes to create a 3-1 edge for the Mavs.
Seven minutes into the third period, Sylvestre found himself open yet again in front of the Oilers’ net.  The 22-year old center faked a forehand and quickly hoisted a backhand over the sprawling Olkinuora for his fourth goal of the season and his second tally of the evening.  The Oilers responded immediately and started their comeback march with a brilliant individual effort from rookie center Christophe Lalancette.  After his first offering was denied by the pad of Mavs’ goalie Josh Robinson, Lalancette located the rebound and did not miss with his second chance.  The first goal of Lalancette’s pro career cut the Missouri lead to two goals with 12:44 remaining in regulation.   The Oilers’ momentum continued with a hard drive to the net by Kyle Bochek.  The veteran center sped behind the Missouri cage and threw a puck out front that was eventually buried by Jordan Kremyr to pull the Oilers within a single goal.  With Olkinuora out of the net in favor of the extra attacker, the Oilers leveled the score thanks to a fortuitous bounce and some quick thinking from Phil Brewer.  As Robinson came out to play the puck off the end boards, the puck suddenly hopped to Brewer who flung the puck toward the slot.  In a frantic effort to get back between his pipes, Robinson found himself out of position and the puck banked off of his leg and into the net for the game-tying goal.  For the first time this season, the Oilers scored three goals in a single period.
Playing 3-on-3 overtime for the third time in the last seven games, the Oilers controlled the time of possession through the first half of the bonus frame.  However, a turnover at the top of the Missouri zone quickly developed into an opportunity for the Mavericks.  Barnes threaded a pass from the right face off circle to the tape of Carzo in the slot and the third-year pro snapped a shot past the blocker of Olkinuora to give Missouri the extra point and the victory.
Brewer led the Oilers attack with a goal and an assist while four Mavericks, Sylvestre, Barnes, Jones, and Root, each finished the contest with a pair of points.  The Oilers settled for a single point despite their highest offensive output in regulation this season.
Tulsa will attempt to end its’ five-game skid on Saturday evening in Allen for the fifth meeting of the season against the Americans.  Game time at the Allen Event Center is set for 7:30 p.m. (CST).
Final Boxscore