TULSA, OK – A three-goal third period thrusted the Tulsa Oilers (9-2-4) to a 5-2 win over the Wichita Thunder (5-6-4) on Thanksgiving Eve Wednesday at INTRUST Bank Arena. It was the Oilers’ fourth straight road victory. 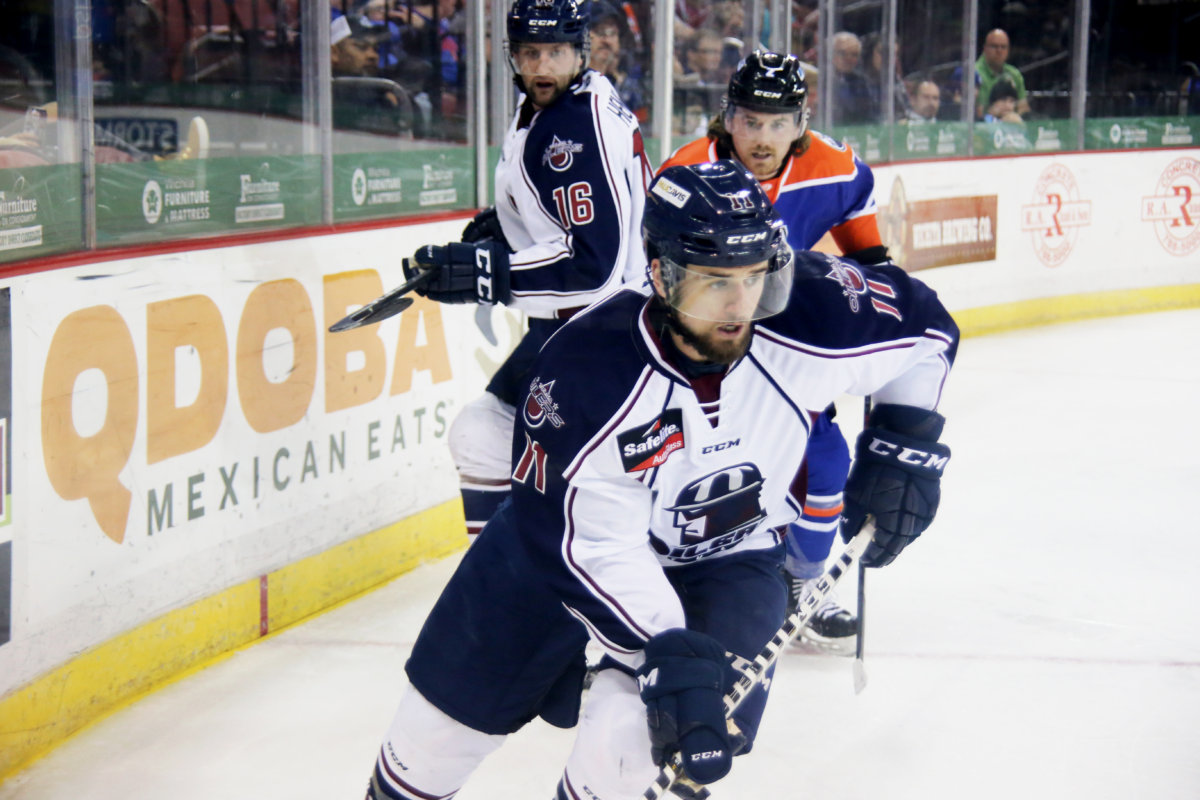 The Oilers killed off two Wichita power plays in the opening frame and took the game’s first lead when Roman Ammirato beat Thunder goaltender Dylan Wells on a breakaway. Tulsa outshot Wichita 12-9 in the first period and led 1-0 after 20 minutes.

Tulsa extended its lead to 2-0 when a Wichita defenseman fell down and turned the puck over. Tyler Soy slid a pass across the slot for Ryan Tesink, who buried the one-timer. The Thunder changed the momentum drastically late in the second period, when Jakob Stukel scored to make it 2-1. Wichita stuck again early in a power play with 1:57 remaining in the middle stanza. Travis Brown fired a shot from the right point through a screen to breakeven with the Oilers entering the third.

Tesink returned the favor early in the third period, setting up Soy for the eventual game-winning goal which put Tulsa back in front 3-2. Scott Henegar added an insurance goal just under three minutes later to give the Oilers their second two-goal cushion of the game. Alex Kromm added an empty net goal with 20 seconds left to seal the 5-2 win. Tulsa goaltender Evan Fitzpatrick stopped 29 of 31 to move to 5-0-2 in his rookie season.

The Oilers return to the York Plumbing Ice at the BOK Center after Thanksgiving and host the Thunder Saturday at 7:05pm in the annual Teddy Bear Toss game, benefiting the Salvation Army. Fans are encouraged to bring as many teddy bears to the game as they can carry and will throw those onto the ice after Tulsa scores its first goal. All the bears will be donated to the Salvation Army for underprivileged children during the Holiday season.

Tulsa then hosts the Kansas City Mavericks at 4:05pm Sunday. That game will be immediately followed by the Oilers’ annual Paint the Ice event, where fans can show off their artistic abilities. The Oilers will play on the painted ice Tuesday, November 27 against the Allen Americans.