Tulsa, OK (March 18, 2016)–Friday night the Tulsa Oilers took down the Missouri Mavericks 3-2 inside the BOK Center in front of 14,265 fans–the second largest crowd in the ECHL this season.

On their first power play and their third shot, the Oilers put themselves on the board before the Mavericks could 14:23 into the first period.  Tulsa Captain Nathan Lutz went back and forth with forward Stefan Legein before he took a shot from the blue line found its way through traffic and behind Parker Milner.

Andrew Courtney knotted up the contest seven minutes into the second frame. The forward tallied his 20th goal when he picked up the rebound off of Jussi Olkinuora and worked the puck into the Oilers net. Sebastien Sylvestre and Darren Nowick were credited as helpers.

Oilers’ heavyweight and fighter Mathieu Gagnon got in on the scoring action as he inked his second goal off the pass from Tom Kroshus.

Tulsa’s lead grew just a minute before the second 20 minutes ran out.  Oilers’ top goal scorer Phil Brewer wrapped the puck around the back of the goal and got it over Miler’s shoulder to advance the score 3-1. Lutz took a second point on the assist.

The third frame gifted the Mavericks an early power play goal. With Legein in the box for delay of game, former Oiler Darian Dziurzynski minimized the Maverick deficit with the help of Trevor Ludwig and Rocco Carzo.

The final score of 3-2 would cleanse the Oilers of their seven-game losing streak and put them at 63 points in the ECHL Standings.

Tomorrow night the Oilers are back in the BOK Center for Margaritaville Night where the ice will be cold but the stands will be hot. Secure your tickets: Call 918-632-7825. 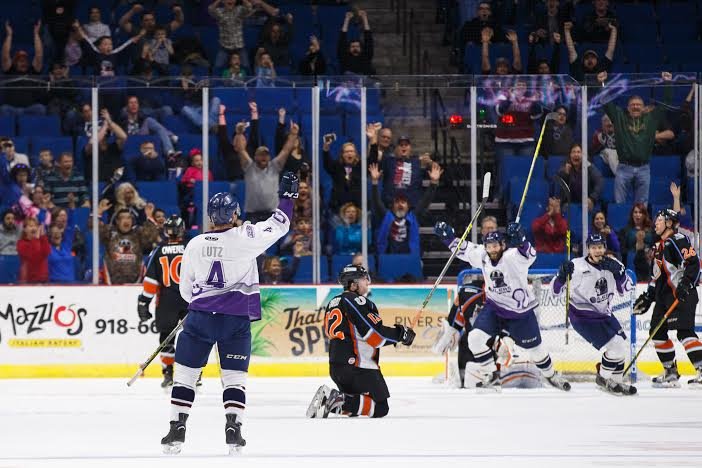 The Tulsa Oilers take on the Missouri Mavericks at the BOK Center March 18, 2016 in Tulsa, Oklahoma. Photo / Kevin Pyle

Below an Oilers excerpt: