WEEK IN REVIEW
The Oilers fought through three games this week but were unable to produce, finishing the stretch with zero of a possible six points.

Tuesday, the Oilers hosted the Steelheads for the second time this season. Although Idaho took an early two point lead, Tulsa rallied. Goals by Jiri Fronk, Dan DeSalvo and Connor Kucera kept the Oilers in the contest. A Steelheads power play and empty net goal eventually gave them the 5-3 success.

Friday, the Oilers hit the road. Their first stop was in Cincinnati where they were shutout by the Cyclones.

The next night Tulsa would play in Fort Wayne, IN. Despite heroic third period efforts, the Oilers fell 2-1. Phil Brewer scored the lone Tulsa goal 12:45 into the third period with assists by Adam Pleskach and Dan DeSalvo. ­­­

LOOKING AHEAD
With another six points on the line this week, the Oilers will travel to Evansville and Missouri for their triple header weekend.

Friday and Saturday the Oilers are in the Ford Center for the first time this season and their first as members of the ECHL. Tulsa faced the IceMen on February 19 in the BOK Center where they owned a 5-2 victory over Evansville. Jussi Olkinuora stopped 34 shots and Phil Brewer tallied the game winner.

The Oilers are in Missouri on Sunday to battle the league-leading Mavericks. Their last matchup was in Silverstein Eye Center Arena on February 16 where the Mavs shutout the Oilers 3-0. The season-series between the two sits 4-3-2.

RING RING
Called-Up. Thursday, the Oilers received a phone called from the Manitoba Moose of the American Hockey League. Friday, Tulsa got another.

First, forwards Axel Blomqvist and Jimmy Lodge were recalled. Blomqvist, 21, has skated in 25 games with the Oilers, producing 10 points (5 goals and 5 assists). The Osby, Sweden native earned a three-point game for Tulsa on February 20 against the Allen Americans. Standing six feet and seven inches, Blomqvist, has appeared in 14 contest with the Moose–inking two penalty minutes. Lodge, since being assigned to Tulsa has tallied eight points in 13 games (1 goal and 7 assists) and 12 penalty minutes.

Friday, The Moose recalled forward Jiri Fronk and defenseman Brennan Serville. Fronk, 22, has suited up for five games with the Oilers where he tallied two points (1 goal and 1 assist). Serville, 22, has split time between the Oilers and Moose this season skating in 17 games with Tulsa and three with Manitoba. The Winnipeg Jets 2011 draft pick (round 3, #78 overall) has registered one assist with the Oilers.

PLAYOFF WATCH
The Oilers are 7th in the Western Conference (14th overall)—a spot that puts them playoff eligible if the season ended today. This week the Oilers take their 61 points and try to snag from the team with 48 (Evansville) and 92 (Missouri).

DESALVO
When in the BOK Center, Dan DeSalvo can’t help but put up numbers. Since December 13, there has yet to be a home game that he has not produced on. With 22 points in 17 games at home, the Illinois native leads Tulsa with 45 points. DeSalvo is 16th overall in the ECHL for points, 4th among rookies in points, 3rd among rookies in assists and first among rookies with a +18 rating.

EXTRA DROPS
Kevin Carr is 7th among ECHL goaltenders with a 2.20 goals against average and second in minutes (2313)… Dennis Brown is 9th among defensemen with 31 points and 3rd in assists with 26… Oilers are fourth in shots against averaging 27.65 and sixth in goals against at 2.54…Tulsa has the sixth best home power play in the ECHL with at 19.3 percent… 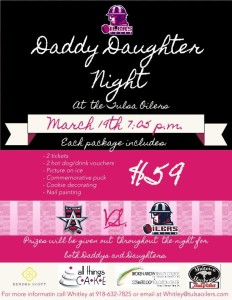 He racked up 66 penalty minutes in only 53 games and led the team in plus/minus at +19. During his high school days at Culver Military Academy, he helped take the team to a state championship title in 2008.

As a freshman at Bowling Green State University, Kucera was ranked third on the team among the defensemen. At the end of the season he was one of the three players who managed to keep their plus/minus levels as a positive level. Kucera also netted his first career goal against Ferris State during his freshman year. By the time Kuceras senior year skated through Kucera played more games, had more assists, and scored two goals per season. As a senior, Kucera also became a member of the WCHA All-Academic Team. He had his first multipoint game against Michigan Tech. Not only did he score the first goal that night, he later went on to assist in another.

Connor Kucera in a Tulsa Oilers jersey has been a pure beauty. He premiered during the regular season against Allen on October 18th and would go on to score his first professional goal against Allen on January 31st. In the game against Quad City on February 13th, Kucera tallied two points, one goal and one assist. More recently, Kucera recorded a +4 rating against the Evansville IceMen on February 19th

TONIGHT’S MATCHUP
The Oilers face the Fort Wayne Komets for the first time this season. Last night, the Komets conquered the ECHL leading Missouri Mavericks in overtime while Tulsa fell short to the Cincinnati Cyclones, 3-0. Fort Wayne has 65 points to Tulsa’s 61 and one less game played than the Oilers.

PLAYOFF WATCH
After a loss to the Cylones last night, the Oilers have dropped to 7th (13th Overall) in the Western Conference. This spot would secure Tulsa in the playoffs if the season ended today. Tonight, the Oilers matchup with the Komets who reside in the 2nd place position

Make aure you get in on the daddy daughter action also coming up. There are packages available for a night of fun with your family. Kendra Scott and other prizes are avilable as well. Whitley Patterson would be the contact for you in the Oilers office if you’re looking for information.