Utica College forward returns to Tulsa for first pro season after posting 11 points in 12 games with the Oilers in March and April. 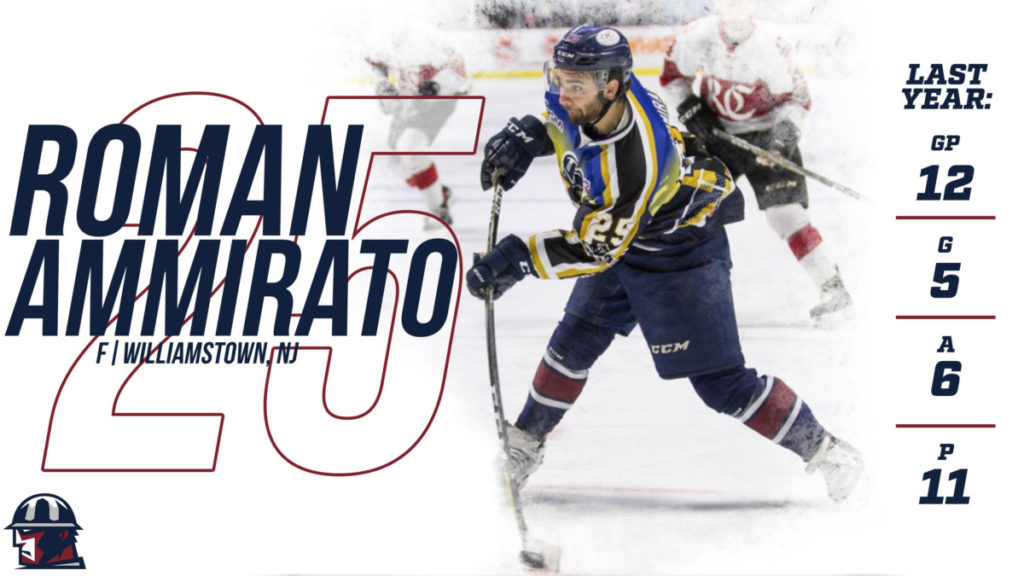 Ammirato, 25, begins his first ECHL season with the Oilers, after posting 11 points (5g, 6a) in 12 games for Tulsa at the end of the 2017-18 season. The rookie forward notched a pair of assists in his professional debut March 10 against Wichita, and scored his first goal—the game-winner—March 25 against Quad City.

“Being able to come to Tulsa for the final 12 games after college was a blast,” said Ammirato. “I learned so much from the guys on the team and it was a great experience which will help me going into this upcoming year. I couldn’t be happier to come back to Tulsa.”

Ammirato compiled 43 points (22g, 21a) during his senior season at Utica College (Division 3), and was named the United College Hockey Conference (UCHC) Player of the Year in 2017-18. The Williamstown, NJ native spent his final two college seasons with the Pioneers, totaling 78 points (34g, 44a) in 54 games, after playing his freshman and sophomore seasons at Union College.

“Roman came in at the end of the year and did a great job contributing offensively,” said Murray. “He showed a high skill set and a willingness as an undersized player to go to the dirty areas of the rink.”

Ammirato enjoyed a three-game goal streak from March 25-April 2 that included his first two-goal game April 2 at Kansas City. He wrapped up the regular season April 7 with his first three-point game (1g, 2a) against Rapid City.

“Tulsa is a great place with such an amazing fan base,” said Ammirato. “I’m extremely excited to be able to play in front of them next year. I can’t wait to get started in October.”

The Oilers’ season opening is 100 days away, when they host the Idaho Steelheads on Saturday, October 13 at 7:05pm at the BOK Center. The two teams will complete Opening Weekend in Tulsa at 4:05pm Sunday, October 14, followed by a postgame skate for the fans with the Oilers players.