Justin Vaive and Alex Kile each score a pair of goals as Cincinnati tops Tulsa 5-2 at U.S. Bank Arena. 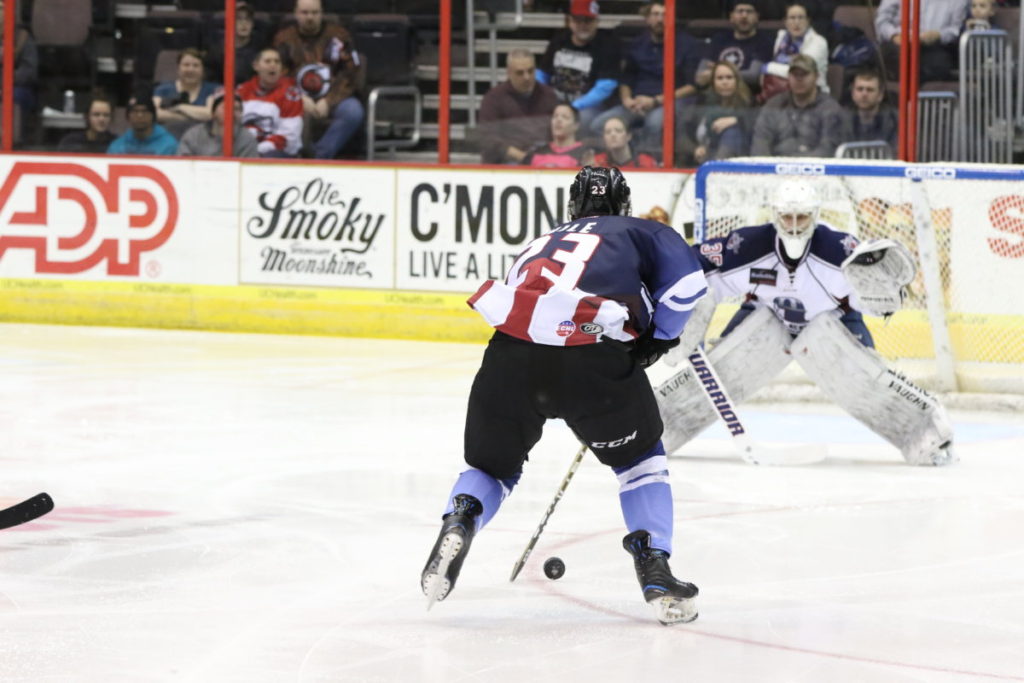 CINCINNATI, OH – The Cincinnati Cyclones knocked off the Tulsa Oilers 5-2 Friday in the final meeting of the season between the two teams at U.S. Bank Arena.

The Cyclones gained an early lead 2:22 into the game, when Chris Leone lobbed a puck to the net from center ice that bounced over the glove of Oilers goaltender Devin Williams. Tulsa answered at 7:28 of the opening period, when Evan Richardson tapped in a centering pass from Joey Sides from the edge of the crease. Cincinnati jumped back in front on their only power play of the frame, when Justin Vaive redirected a centering pass into the net. The Cyclones led 2-1 after one.

Cincinnati added two goals in the second period to increase its lead to 4-1 after two. Alex Kile scored the third Cyclones goal on a 3-on-2 rush when he snapped a quick shot under the crossbar. Vaive added his second of the game when he shot a one-timer into the net from low in the slot. The Oilers outshot the Cyclones 25-22 through 40 minutes.

Kile added his second goal of the game in the third period to increase the Cyclones lead to 5-1. Oilers forward Ryan Tesink sniped a wrist shot over the glove of Cincinnati goaltender Jonas Johansson to bring Tulsa to within three, but Johansson stopped 38 of 40 Oilers shots in leading the Cyclones to the 5-2 win. The loss extended Tulsa’s winless skid to five games dating back to Jan. 31.

The Oilers return home for three games next weekend on the York Plumbing Ice at the BOK Center in Tulsa. The Florida Everblades come to town Friday and Saturday for the Oilers’ only two games this season against an Eastern Conference opponent. Catch the action on the Sports Animal, www.tulsaoilers.com or ECHL.TV, with coverage starting at 6:45pm.