TULSA, OK – Just over two days before the 2015-16 regular season opener, the Tulsa Oilers announced on Wednesday that defenseman Brennan Serville has been reassigned to Tulsa from the Oilers’ American Hockey League affiliate, the Manitoba Moose.

Serville, 6-foot-3, 210 pounds, was selected by the Winnipeg Jets in the third round of the 2011 NHL Entry Draft. The 22-year old rookie was attending training camp with the Moose after completing a four-year collegiate career at the University of Michigan. A native of Pickering, Ontario, Serville suited up in 129 games for the Wolverines and recorded one goal, 20 assists, and 46 penalty minutes during his time in maize and blue. Serville finished each season at Michigan with a plus rating and in his senior campaign of 2014-15, he led all Wolverine defenseman at +12. 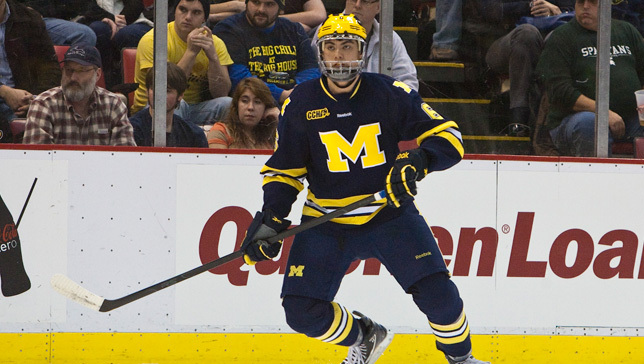 Brennan Serville (above) adds size and depth to the Oilers’ defense corp after being reassigned to Tulsa from the Manitoba Moose.

In addition to Serville’s reassignment, the Oilers completed three trades on Wednesday. Forward Tom Mele was dealt to the Norfolk Admirals in exchange for forward Jordan Kremyr. The Oilers acquired defenseman Joe Sova from the Kalamazoo Wings for future considerations and sent defenseman Sean Erickson to the Rapid City Rush for future considerations.

Kremyr, 29, is entering his fifth professional season. The 6-foot-0, 195-pound winger appeared in 57 games last season for the Bakersfield Condors and registered 24 points (13 goals, 11 assists) to go along with 51 penalty minutes. Kremyr, who hails from Cloverdale, British Columbia, played his first three seasons with the Alaska Aces and in 2013-14, he was called up to the Abbotsford Heat (AHL) for 16 games.

Sova suited up for 62 games last season with Kalamazoo and recorded three goals, 12 assists, and 34 penalty minutes. The 6-foot-3, 190-pound blue-liner has enjoyed stints in the AHL with the Albany Devils, Charlotte Checkers, and most recently, the Chicago Wolves. In addition to playing parts of three seasons in Kalamazoo, Sova, a 27-year old from Berwyn, Illinois, has worn the colors of the ECHL’s Florida Everblades, San Francisco Bulls (defunct), Reading Royals, and Toledo Walleye.

Erickson, who was poised for his fifth season as an Oiler, is heading back to Rapid City where he spent the majority of the last two seasons. The seventh-year pro has appeared in 385 career games and ranks ninth on the Oilers’ all-time list of games played with 247 tilts in Tulsa colors.

The Oilers will hold their final preseason practice tomorrow at 10:00 a.m. at the BOK Center in preparation for Friday’s home opener against the Wichita Thunder at 7:05 p.m. For ticket information, call 918-632-7825 or visit www.tulsaoilers.com.