Former Alaska Aces coach comes to Tulsa with a history of success, including a Kelly Cup Championship in 2014. 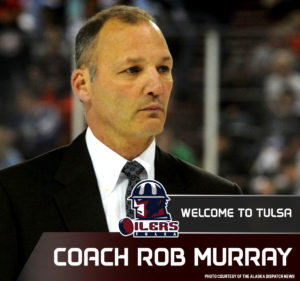 TULSA, OK – The Tulsa Oilers, proud member of the ECHL, and General Manager Taylor Hall announced Wednesday that Rob Murray has been named the organization’s next Head Coach and Director of Hockey Operations.

Murray comes to Tulsa with a long history of success as a player and coach. The 50-year-old recently completed his sixth season as Head Coach of the ECHL’s Alaska Aces, who ceased operations in April.

During his tenure in Anchorage, Murray led Alaska to three consecutive Brabham Cups with the best regular season record in the ECHL from 2011-12 to 2013-14. The Aces captured the Kelly Cup that third season.

“I’m very excited to be the next Head Coach of the Tulsa Oilers,” said Murray. “I like my teams to play a high-tempo, energetic, physical, disciplined game. If we can bring that to Tulsa, with a winning atmosphere and a winning mentality, we’ll have a great season.”

Following a 16-year playing career in the AHL and NHL, the Toronto native began his coaching career in 2003 as an Assistant Coach with the AHL’s Providence Bruins. After five years as an Assistant in Providence, Murray was promoted to Head Coach in 2008, where he led the Bruins to the playoffs in his first season.

In 431 games as an ECHL Head Coach, Murray has compiled a career record of 231-150-50. His teams have finished with winning records in five of six seasons, including three playoff appearances and one Kelly Cup title.

“Rob is a proven winner who has had success in both the ECHL and AHL,” said Hall. “We are thrilled to have him here in Tulsa and feel he will provide the necessary leadership to make us a playoff contender every year.”

The Oilers drop the puck on their 66th season in Tulsa and tenth at the BOK Center October 13, when they welcome the Kansas City Mavericks.