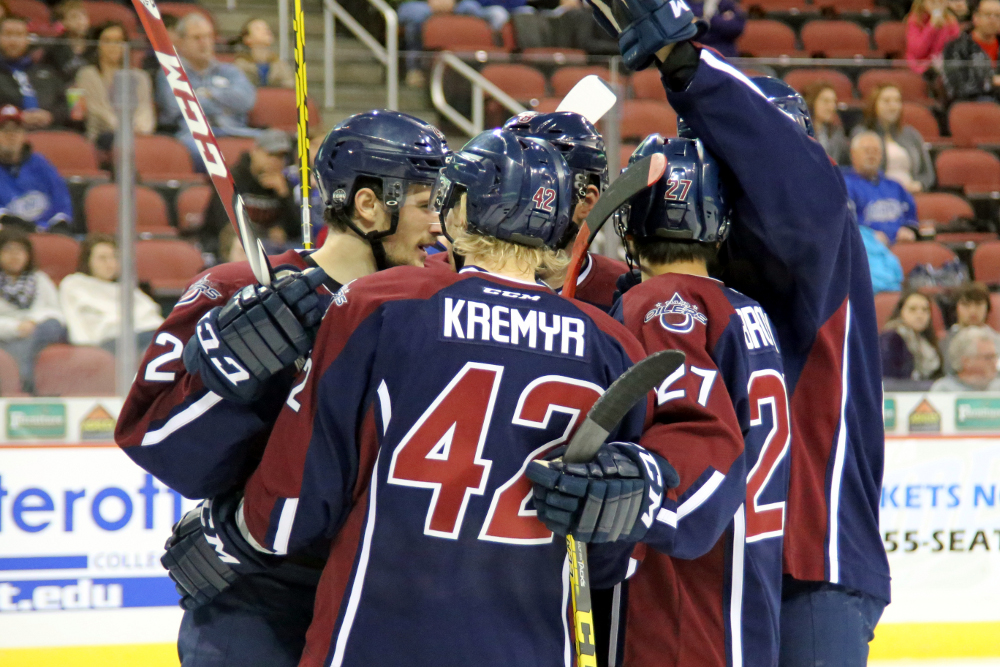 WICHITA, KS – Brady Ramsay notched a pair of goals, including the game-winner in the third period on Saturday night, to lift the Oilers to a 4-2 triumph over the Thunder in front of 4,828 at Intrust Bank Arena.  The Oilers claimed their second straight victory over the Thunder in the StoneWolf Casino Cup series in a fight-filled contest that demonstrated the dislike, and the intensity between the two long-time rivals.
A fortunate bounce off glass led to Wichita’s first goal of the game at the 12:16 mark of the opening period.  Thunder defenseman Donnie Harris shot the puck down the boards and as Oilers’ goalie Kevin Carr moved behind his net to anticipate the path of the puck, the frozen disc popped off the corner glass and slipped out in front of the Tulsa net.  Danick Gauthier slammed the puck into the yawning cage for his fourth goal of the season and a 1-0 lead for the home team.  Four minutes later, the Oilers were able to level the contest thanks to a strong individual effort from Brady Ramsay.  The second-year winger beat Wichita defenseman Eric Springer to a loose puck and finished off a backhand wraparound for his third goal of the season and his first strike in the last 14 games.  With less than a minute to play in the period, Oilers’ forward Mathieu Gagnon was called for boarding and the Thunder was able to capitalize on the power play.  Gauthier roofed a shot over Carr with only one second remaining on the clock to give Wichita a 2-1 edge and just its fourth power play goal of the entire season.
It didn’t take long for the Oilers to tie the score in the second period.  Christophe Lalancette batted a rebound through Thunder goalie Grant Rollheiser at 2:50 to draw even with his third goal of the season. The middle frame turned nasty at 4:05 when Thunder forward Paxton Leroux bloodied the face of Oilers’ defenseman Tom Kroshus.  Both players were assessed a five-minute fighting major while Leroux incurred an extra minor for instigating and Kroshus was sent to the dressing room for facial repairs.  With five and a half minutes remaining in the period, the Oilers and Thunder suddenly turned back the clock to the old Central Hockey League days by engaging in three fights in a matter of seconds.  First, Ramsay traded punches with Mason Baptista and after the ensuing face off, Gagnon attempted to avenge Kroshus by dropping the mitts with Leroux.  The fight hat-trick was completed moments later as Emerson Clark engaged in his first fight as an Oiler by taking on Thunder enforcer Erick Lizon.  With the dust finally settled, the four fights in the second period accounted for 48 of the 66 total penalty minutes in the contest.
The 2-2 draw held until the latter stages of the third period when Ramsay gave Tulsa its first lead of the night.  A shorthanded slap shot by Ben Walker was kicked out by Rollheiser but Ramsay buried the second chance bounce for his second goal of the night and the Oilers’ first shorthanded tally of the season.  Clark sealed the victory with an empty-net goal at 19:54 and the Oilers earned back-to-back wins for the first time in nearly three and a half weeks.
The Oilers are on a two-game road win streak for the first time this season and will start a stretch of eight consecutive home games on Sunday afternoon at 4:05 p.m. against the Central Division-leading Missouri Mavericks.
Final Boxscore
Are you looking for the best Activities in Tulsa?

They’re still poking at the puck along the boards on the near side, and Costello is about to come out of the penalty box. Here’s a shot up the slot, Americans back to full strength. Another shot by Harstad, kick save by Gill, sent back toward the goal. That went off a defenseman’s skate, and it’s knocked away by Gill behind the goal. DeSalvo gets it for the Oilers.

Out to the blue line, kept in at the point there by Clark. Now behind the goal the puck goes, now the Oilers will make a line change.

Americans … One of the American players is skating off the ice, favoring his left leg. Ian Schultz. He might be the one who took that shot off the leg. Back come the Americans now with it. They dump it off into the Tulsa zone to complete a line change. Lutz gets it in the corner.

Lutz bumped there, loses control of the puck momentarily now. The Oilers get it back to Brisebois, send it ahead quickly to Gagnon. Gagnon with it on the right wing, puts it into the Americans’ zone. After it behind the goal is Federico.

Federico with it on the right side, and now sends it over on the left. Into the center circle for Costello. He has it knocked away and the Oilers send it back into the Americans’ end. No icing, they wave it off.

Gagnon with it, and he gets bumped away. Puck comes back into the Tulsa end, turned around by Konan. Now Lalancette along the boards in the neutral zone, he gets it ahead to Pleskach over on the right side to Sova, now they work it out of the zone into neutral ice.

On the right side of the neutral zone, Blomqvist brings it in over the blue line. Pass in front goes wide to the right, now around the corner. Here comes Pleskach with it, and the Oilers misplay it. Blomqvist couldn’t get the shot off, back come the Americans.

Parker takes it behind the goal. Now he sends it around the far boards. Allen with it in the Tulsa end for Gens. Aaron Gens with it now, goes back behind the goal, sends it into the corner for a teammate, Crane, and now up to the point, kept in there by Pinkston. Over on the right side to Gens at the point, he loses it off his skate, it goes out of the zone, the Americans going to be offside, they’ll have to come back out and retouch. Tulsa will recover the puck in their own end, and reset the play from behind the goal.

Joe Sova with it behind the net. Sova brings it out, now sends it ahead through the neutral zone. It went off the stick of an American player, so they wave off the icing as it went through just about everybody, but did go off Pinkston’s stick.

The Americans get it again in the neutral zone. Lafontaine sends it ahead in the Tulsa end. DeSalvo chases after it. Behind the goal, he sends it to the far side. Still in the Tulsa zone, intercepted, broken up by the Americans. They send it toward the goal, but it went wide. Carr plays it now around the boards to the near side.