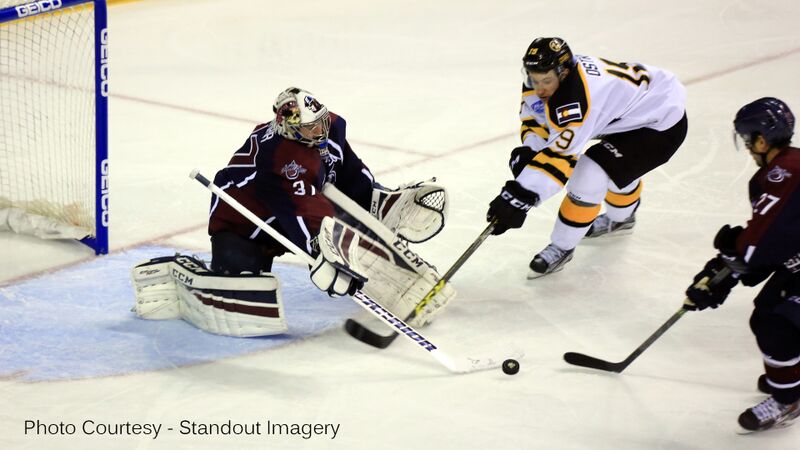 Oilers’ goalie Kevin Carr pokes the puck away from Eagles’ forward Kyle Ostrow during the third period of Saturday’s game at the Budweiser Events Center.

LOVELAND, CO – The Tulsa Oilers ended up on the wrong side of 2-1 decision to the Colorado Eagles on Saturday night at the Budweiser Events Center.  Ludwig Karlsson’s power play goal at 12:08 of third period proved to be the difference in the contest as the Oilers were swept by the Eagles in back-to-back weekend games.
After a 3-1 loss to the Eagles on Friday night, Tulsa forward Darian Dziurzynski tried to give his team an early spark by trading punches with Colorado defenseman Tiegan Zahn just ten seconds into the game.  Much like Friday’s first period, the Eagles got off to a fast start and connected for the first goal of the game at the 3:14 mark.  With Joe Sova in the box for holding, a blue line blast from Eagles’ defenseman Collin Bowman sizzled past Oilers’ goalie Kevin Carr to give the home team a 1-0 lead.  Bowman’s fourth goal of the season was Colorado’s third power play goal of the weekend and eighth power play goal of the season.
The evening became more combative in the second period.  Tulsa center Dan DeSalvo was knocked out of the game by a hit from Jesse Mychan and Jordan Kremyr immediately came to his teammate’s defense by fighting Mychan.  DeSalvo, who scored his first professional goal on Friday night, was down on the ice for several minutes and did not return after being helped to the dressing room.  The Oilers gathered themselves and found the tying goal at 12:24 of the middle frame.  A drive toward the net by Adam Pleskach resulted in a loose puck in the Colorado crease and defenseman Matt Konan swatted home the rebound for his second goal of the season.
In the third, the Oilers fired the first five shots of the frame but were unable to solve Eagles’ goalie Kris Lazaruk.  Tulsa defenseman Dennis Brown cross-checked Eagles’ forward Kyle Ostrow at 11:55 and had only been sitting in the penalty box for 13 seconds when Karlsson made his move.  The Swedish forward took a couple of steps off the boards and rifled a wrist shot over the shoulder of Carr for the go-ahead tally and his first goal of the season.  Over the two weekend games, four of the Eagles’ five goals were scored on the power play.  The Oilers went 0-for-10 with the man-advantage over the course of the two games and dipped to an overall record of 4-5-0-0.
Tulsa is 1-4-0-0 on the road this season and will attempt to end a three-game road losing streak in a visit to Wichita on Wednesday, November 11 at 7:05 p.m.
Final Boxscore
Looking for Things To Do in Tulsa?