Oilers rookie went 6-0-0 with a 2.44 goals-against average in October to help Tulsa to ECHL’s best record

PRINCETON, N.J. – Jamie Phillips of the Tulsa Oilers has been selected as the Warrior Hockey ECHL Goaltender of the Month for October, as announced by the league Wednesday. 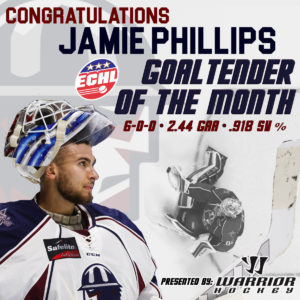 Under contract with the National Hockey League’s Winnipeg Jets, Phillips allowed two goals or less in three of his six appearances while making at least 23 saves five times, including a 42-save performance in a 3-2 win over Allen on Oct. 25.

A native of Caledonia, Ontario, Phillips leads the ECHL with six wins and ranks fourth among rookie goaltenders with a 2.44 goals-against average.

Prior to turning pro, he played four seasons at Michigan Tech University where he appeared in 99 career games posting an overall record of 57-25-8 with 10 shutouts, a 2.00 goals-against average and a save percentage of .922. The Jets drafted Phillips in the seventh round of the 2012 NHL Entry Draft.

Tulsa begins a stretch of four games in five days tonight at 7:05pm against the Utah Grizzlies at the BOK Center. $1 hot dogs will be available to those in attendance at designated concession stands. The Oilers then host the Missouri Mavericks at 7:05pm Friday, and will wear denim-themed specialty jerseys that will be auctioned off after the game.