TULSA, OK – The Tulsa Oilers, proud ECHL affiliate of the NHL’s Winnipeg Jets and AHL’s Manitoba Moose, have acquired big defenseman Samuel Noreau and the rights to forward Alexandre Ranger from the Norfolk Admirals in a four-player swap Monday. In return, the Oilers send forward Ben Murphy and goaltender Steven Summerhays to the Admirals. 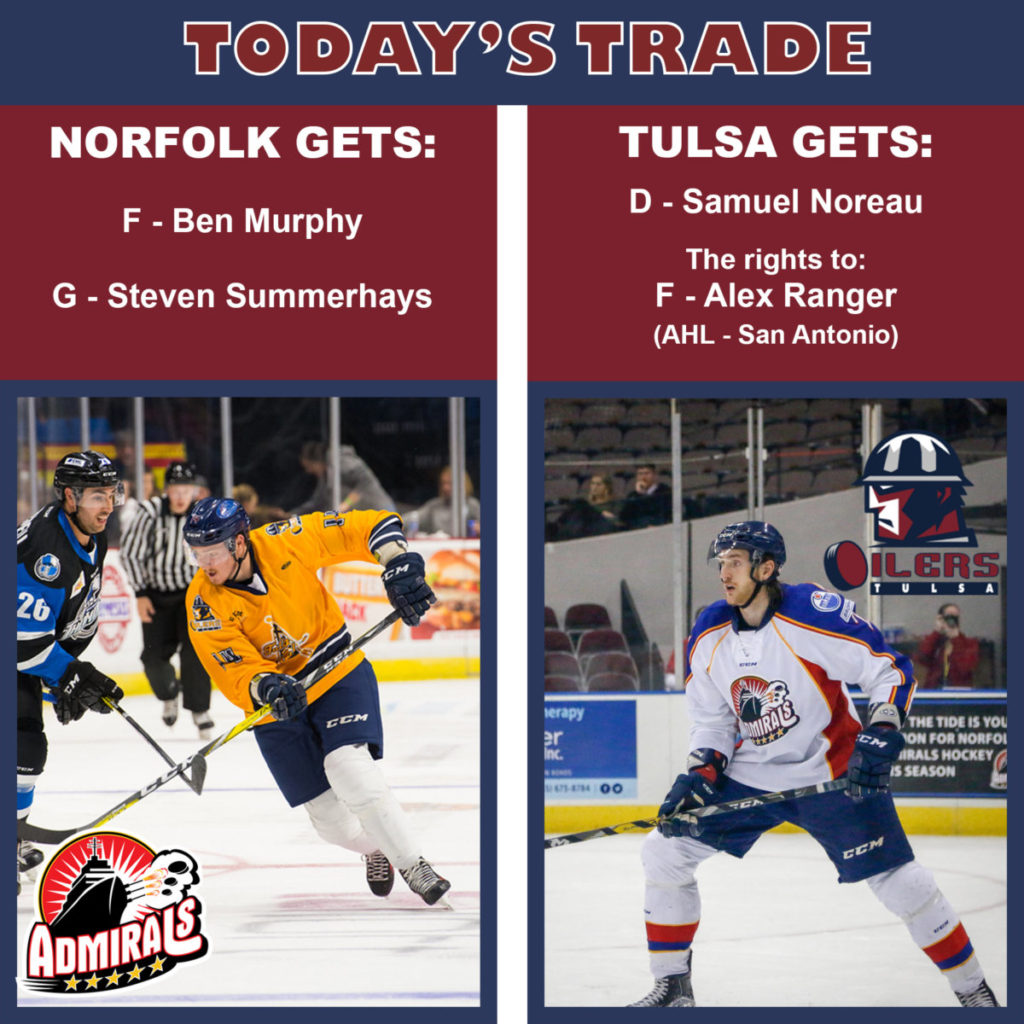 Noreau, 23, comes to the Oilers after recording five points (two goals, three assists) in 18 games with the Admirals. The 6’5 defenseman from Montreal, Quebec was a fifth round pick of the New York Rangers in 2011 and has 208 games of ECHL experience with Norfolk, Missouri, Evansville and Greenville, and nine games of AHL experience with the Hartford Wolf Pack.

Ranger, 21, is currently with the AHL’s San Antonio Rampage, where he’s skated in four games. Before that, the LaSalle, Quebec native had one goal in eight games with the Admirals to start the season. As a rookie in 2015-16, Ranger compiled 23 points (11 goals, 12 assists) in 45 games in Norfolk, and played 17 games for the AHL’s St. John’s IceCaps, totaling two goals and one assist.

Murphy heads to Norfolk after scoring five goals and adding an assist in 16 games for the Oilers this season. He had four goals and four assists in 10 games at the end of last season after finishing his college career at Bowling Green State University.

Summerhays did not appear in any games for Tulsa. He signed with the Oilers in the summer after suiting up in 14 games for Alaska and eight games for Missouri as a rookie in 2015-16.

The Oilers host the Alaska Aces Wednesday at 7:05pm at the BOK Center in the first-ever meeting between the two teams. Tulsa then hosts Colorado Friday and Saturday night at 7:05pm.