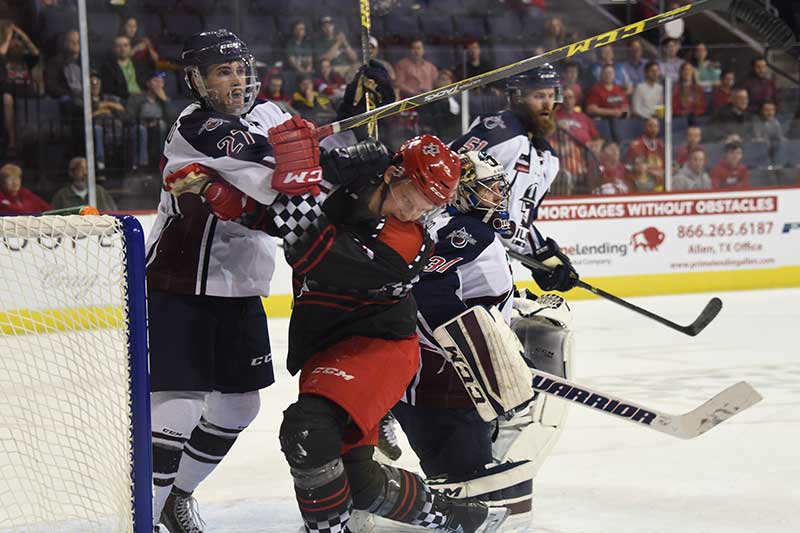 Tulsa defenseman Justin Mansfield shoves Allen forward Gary Steffes out of the crease during the 2nd period of Saturday’s game at the Allen Event Center. (photo by: Melissa Warren)

ALLEN, TX – The Tulsa Oilers were unable to overcome a two-goal deficit in the third period on Friday night and dropped to 0-2 on the season with a 4-2 setback to the Allen Americans in front of 4,553 at the Allen Event Center. The Oilers failed to capitalize on eight powerplay opportunities, including a 5-on-3 advantage in the final frame.

The Americans wasted no time getting their offense in gear. Just 24 seconds into the first period, Justin Courtnall’s snap shot zipped past Tulsa goalie Kevin Carr to give the defending Kelly Cup champions a 1-0 edge. Despite managing only four shots on goal in the opening 20 minutes, the Oilers were able to equalize before the intermission. After forcing a turnover at center ice, Oilers forward Darian Dziurzynski executed a nifty passing exchange with Brady Ramsay and swatted a backhand past Joel Rumpel for his first goal of the season.

Allen surged back in front at the 14:16 mark of the second period thanks to a rebound tally from Gary Steffes with an extra Americans attacker on the ice and the Oilers outnumbered 6-to-4. Dyson Stevenson’s shot caromed off the pad of Carr and Steffes, the league’s leading goal-scorer in 2014-15, was there to slam home his first goal of the season.

David Makowski gave the Americans a two-goal cushion at 4:46 of the third period when his backhand from the bottom of the left circle slipped through Carr. The Oilers seized momentum after killing off an Americans’ two-man advantage and pulled back within just over 11 minutes remaining in regulation. Dan DeSalvo rifled a pinpoint pass to the tape of Brian Nugent who got behind the Allen defense and snapped a shot past the blocker of Rumpel to trim the Americans’ lead to 3-2. Back-to-back penalties called against Daniel Doremus and Greger Hanson provided the Oilers with a lengthy 5-on-3 powerplay and their best opportunity to level the score. Rumpel stood tall in the Allen net to prevent the equalizer and with less than two minutes to play, Tristan King fired into the Oilers’ empty net to seal a win for the Americans.

Carr finished his first start of the season with 22 saves while Rumpel recorded his first win with a 26-save performance. The Oilers will go in search of their first win on Sunday afternoon at 4:05 p.m. at the BOK Center in the conclusion to the weekend home-and-home series with the Americans.