Tulsa also brings in Dallas native Justin Greenberg on a professional try out. 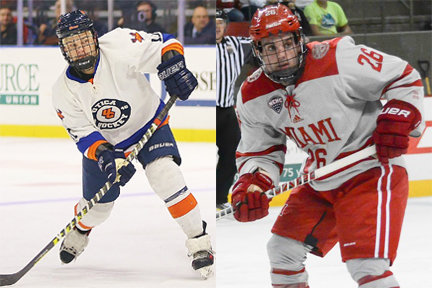 Schmidt, 23, joins the Oilers for his first professional season after finishing his college career in 2016-17 at Utica College. The Flat Rock, MI native recorded 15 points (3g, 12a) and 78 penalty minutes in 25 games for the Pioneers last season before turning pro.

“Connor comes to us highly recommended by his coaches at Utica College,” said Murray. “He brings an element of grit to our team that is important to have.”

Before college, the 5’11, 174 lbs. defenseman played one season of juniors with Traverse City of the North American Hockey League, and spent parts of two junior seasons with the Des Moines Buccaneers of the United States Hockey League. In total, Schmidt compiled 43 points (11g, 32a) and 362 penalty minutes in 136 games of juniors.

Greenberg, 23, played four seasons of college hockey at Miami University (Ohio), where he had 29 points (6g, 23a) in 127 career games. The rookie forward from Dallas was a college teammate of Oilers defenseman Chris Joyaux for three of those years with the Redhawks from 2013-16.