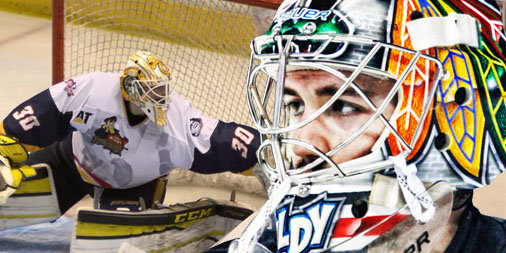 Hildebrand, 24, signed an American Hockey League contract with the Rockford IceHogs in 2016-17 and spent most of the season with the Indy Fuel, where he went 18-21-3 with a 3.75 goals-against average and .899 save percentage in 47 appearances. He also played in three games with the IceHogs, composing a 0-1-0 record.

The Butler, PA native won a Kelly Cup with the Allen Americans in 2015-16, after joining the team at the conclusion of his senior season at Michigan State University. Hildebrand went 5-1-0 in six regular season games for the Americans, with a 2.31 goals-against average and .925 save percentage. He also went 3-2-0 during the team’s playoff run.

Before turning pro, Hildebrand was a four-year starter at Michigan State, where he appeared in 133 games and compiled a career 2.54 goals-against average and .921 save percentage.

Parks, 25, turned pro last season, where he played four games for the Southern Professional Hockey League’s Evansville Thunderbolts, before finding a home with the SPHL’s Peoria Rivermen. The St. Louis, MO native posted a 8-3-4 record with a 2.12 goals-against average and .925 save percentage in 17 games with the Rivermen. He also appeared in two games in late January with the ECHL’s Elmira Jackals.

The 6’6, 215 lbs. goaltender spent two seasons at St. Lawrence University from 2013-15 before finishing his amateur career at Adrian College in 2015-16. Parks previously spent two seasons of juniors in the North American Hockey League with the Springfield Jr. Blues in 2011-12 and Minot Minotauros in 2012-13.