OILERS SETTLE FOR SINGLE POINT IN SHOOTOUT LOSS TO THUNDER 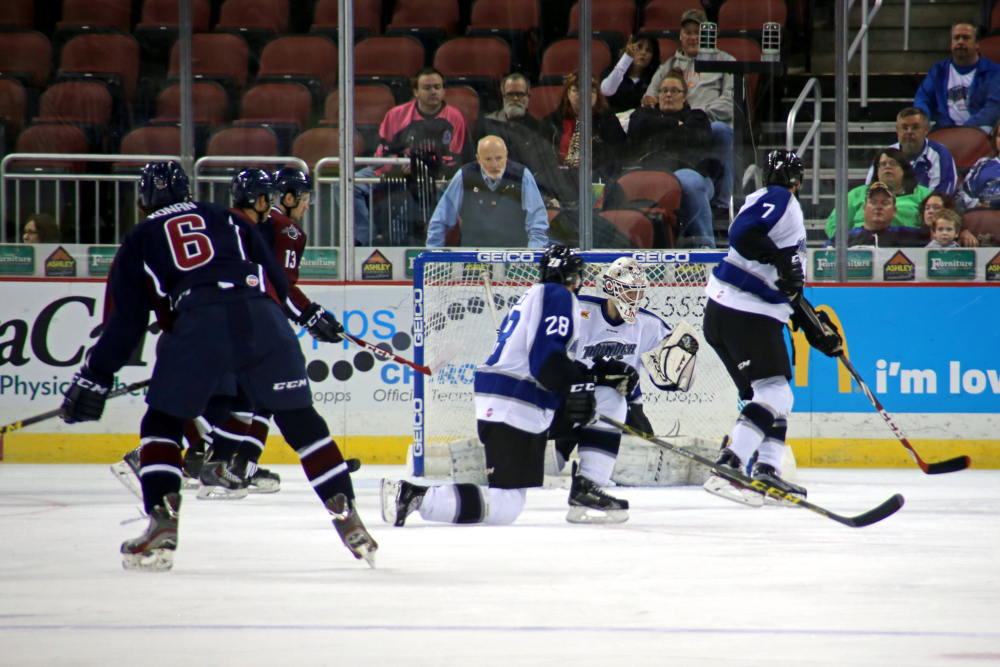 Thunder goalie David Shantz closes his glove on the puck during the third period on Wednesday night at INTRUST Bank Arena. (photo by: Johnna Raymond)
WICHITA, KS – The Tulsa Oilers picked up a point on the road on Wednesday night but fell just short in a 2-1 shootout loss to the Wichita Thunder in front of 2,567 at Intrust Bank Arena.  Anthony Deluca concluded a contest that required more than 65 minutes to decide with a nifty shootout winner to help push the Thunder one point in front of the Oilers in the Central Division standings.
With just over four minutes off the first period clock, each team’s heavyweight fighter stepped into the spotlight.  Mathieu Gagnon of the Oilers and Erick Lizon of the Thunder shook off their helmets and gloves and proceeded to trade monster right hands in a spirited bout that delighted the fans and inspired both benches.  The Thunder was called for tripping and delay of game minors in the span of 33 seconds and the Oilers were able to capitalize on the two-man advantage.  Veteran center Brandon Wong buried a rebound from the side of the Wichita net to give the Oilers the first goal of the contest. Wong scored his fourth goal of the season, his third on the power play, and the Oilers snapped out of a three-game power play drought.
Peter Sakaris put Wichita on the board less than a minute into the second period with his team-high fourth goal of the season.  The 23-year old forward walked off the corner boards and elevated a close-range backhand shot over the glove shoulder of Tulsa goalie Jussi Olkinuora to level the contest at 1-1.  The teams traded power plays in the latter stages of the middle frame but the game remained deadlocked throughout the remainder of the period thanks in large part to several quality saves from Wichita netminder David Shantz.
Each squad fired 10 shots on net in the third period but the duel between Olkinuora and Shantz, along with a late penalty kill by the Oilers, forced the game into extra time.  Tulsa was not able to get a shot on goal through five minutes of three-on-three overtime but Olkinuora made three of his 30 saves in the bonus session.  With the game and the shootout tied at 1-1 in the fourth round, Deluca finally put an end to the evening with a series of dekes and a backhand finish.  The Thunder snapped a four-game losing streak and the Oilers, winless in four consecutive road games, were forced to settle for a single point.  Tulsa dropped to 1-1 in shootouts this season and fell to 0-1-0-1 against Wichita in the StoneWolf Casino Cup series.
The Oilers scored just a single goal for the third straight game and suffered a loss for the first time this season when scoring the game’s first goal.  Tulsa ended the night 1-for-4 on the power play while Wichita, ranked last in the league on the power play, continued its woes with an 0-for-5 performance.
Two rookie forwards for Tulsa, Igor Vladykovskii and recently signed Christophe Lalancette, made their professional debuts on Wednesday night.
The Oilers return to home ice on Friday night for Budweiser Military Night benefiting Folds of Honor at 7:05 p.m. against the Allen Americans.
Final Boxscore
Looking for Things To Do in Tulsa?