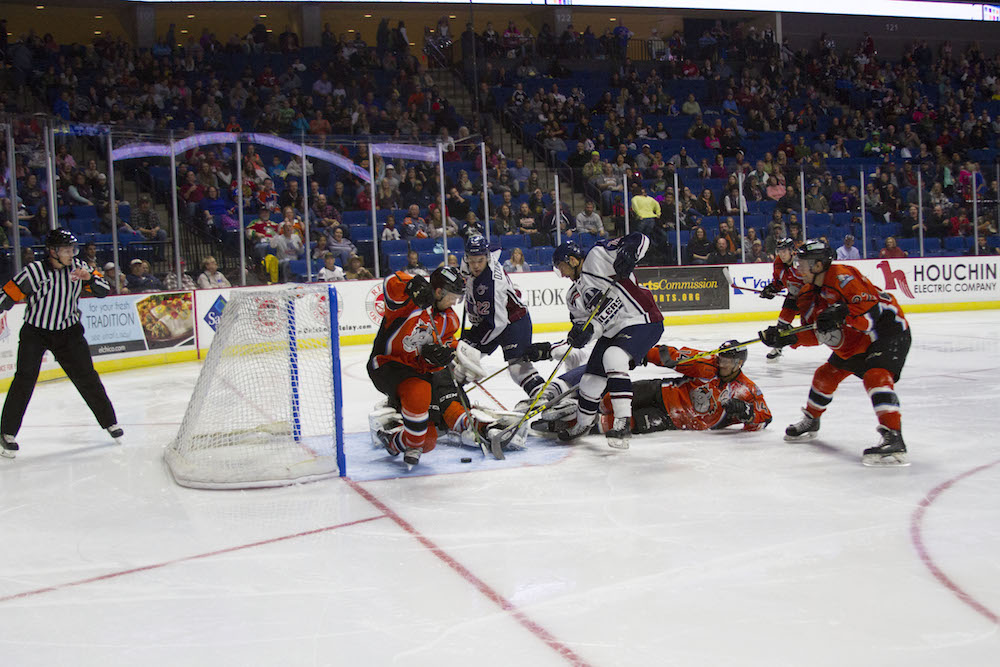 Oilers’ forwards Ben Walker (21) and Darian Dziurzynski (22) search for a loose puck in the Missouri crease during the second period of Friday’s game at the BOK Center. (photo by: Lan Le)
TULSA, OK – Brandon Wong opened and closed for the Tulsa Oilers on Friday night in a 4-3 shootout win over a pesky Missouri Mavericks squad.  The 28-year old center started the scoring in the first period and sealed the contest by slipping a shot through Missouri goalie Josh Robinson in the fifth round of the shootout to give Tulsa two points in front of 6,494 at the BOK Center.  The Oilers leveled their record at 3-3-0-0 on the season while the Mavs saw their five-game win streak halted.
The Oilers entered the evening with just one power play goal in their first five outings, but at the 15:57 mark of the opening frame, Wong sent a shot through the penalty kill unit of the Mavericks that got past a screened Robinson for the second man-advantage tally of the season.  Wong’s strike was his third goal of the season and third goal in the last four games.  For the first time this season, the Oilers held a lead at the conclusion of the first period.
At 8:59 of the second frame, after several near misses around the Missouri net, Oilers’ defenseman Dennis Brown slammed home a shot from the top of the right face off circle to push the lead to 2-0. Brown, who was assisted by Brady Ramsay and Matt Konan, has now registered four points in his first three games in Tulsa colors.  The Mavericks started a surge at 10:55 as Jesse Root whipped a wrist shot past Jussi Olkinuora at 10:55 for a power play goal to cut the Oilers’ edge in half.  Only 82 seconds later, Andrew Courtney, one of only three returning Mavericks from the 2014-15 squad, deflected a puck through Olkinuora to even the affair at 2-2.
With Root in the penalty box for high-sticking early in the third, the Oilers were able to push in front once more.  A scramble for a loose puck in the Mavs’ crease resulted in a tap-in goal for Darian Dziurzynski and the Oilers’ second power play goal of the night.  The euphoria was short-lived however as less than four minutes later, Root roofed another wrist shot for his second goal of the night and his fifth strike of the season.
Regulation expired with the game knotted at 3-3 and both sides entered overtime for the first time this season.  Olkinuora made five of his 29 saves in the extra session and Robinson denied Dziurzynski on a breakaway to extend the game and force a shootout.
After four shooters from each side were denied, Wong somehow squeezed the puck through the legs of Robinson to set up a save-and-win scenario for Olkinuora and the Oilers.  Missouri forward Rocco Carzo was denied by the Tulsa netminder to finally finish off a wildly compelling contest.
Wong recorded his first multi-point game of the season and extended his point streak to four games.  Dziurzynski finished the night with a pair of points and Ben Walker chipped in two assists to help lead the Oilers’ attack.  Tulsa was perfect on the power play, 2-for-2, while Missouri settled for a 1-for-5 mark with the man-advantage.
The Oilers have the rest of the weekend off and return to home ice on Tuesday, November 3 for a 7:05 p.m. showdown against the Allen Americans.
Final Boxscore
Are you looking for Things To Do in Tulsa?