TULSA, OK – The Tulsa Oilers stand alone atop the ECHL standings after riding a fast start and strong goaltending to a 3-2 win Tuesday against the two-time defending Kelly Cup Champion Allen Americans at the BOK Center. The last time the Oilers started 5-0 was the 2002-03 season.

Dan DeSalvo gave Tulsa the early lead when he scored the fastest goal in the ECHL this season 10 seconds into the contest. The ECHL Player of the Week, Emerson Clark, buried a rebound on his backhand 2:26 into the game, after an Oilers shot from the point ricocheted off the end boards and back out in front. 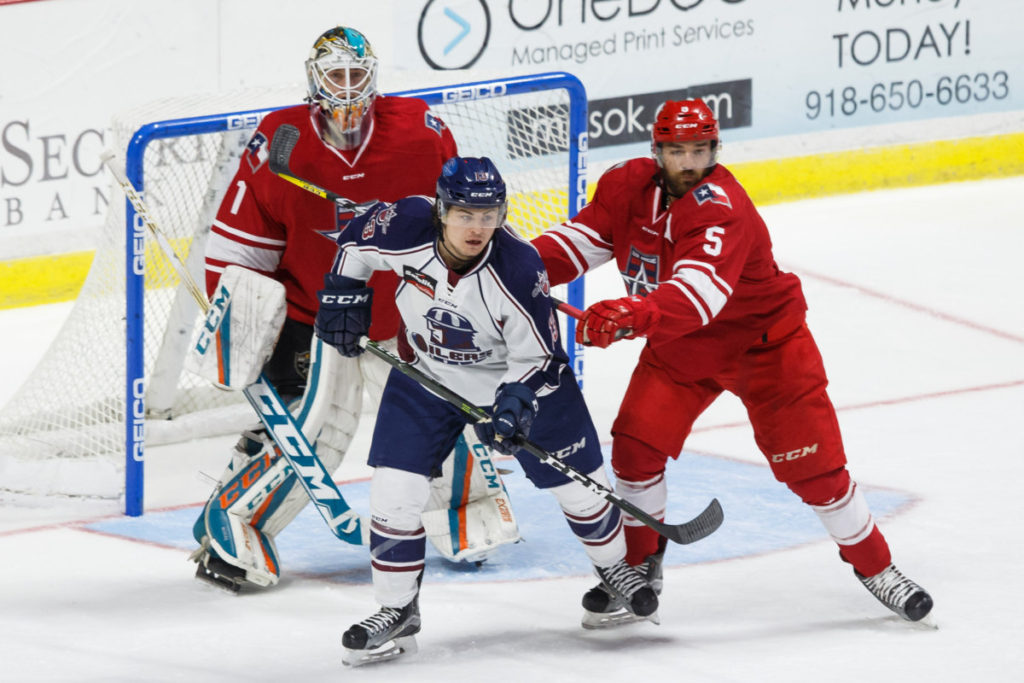 Late in the frame, Allen cut the lead in half, when Chris Crane’s shot made it through a screen with 2:32 left. But former Americans forward Reid Halabi recorded his first Oilers goal when he spun in the slot and shot a bouncing puck through the legs of Allen goaltender Jamie Murray with 34 seconds remaining in the frame to give Tulsa a 3-1 lead.

Oilers rookie goaltender Jamie Phillips kept his team’s two-goal lead intact with 11 saves in the middle period, while Allen’s Murray settled in and stopped 12 Tulsa shots in the frame. The score remained 3-1 after two.

The Americans desperately tried to climb back into the game in the third period, but Phillips stopped 24 of 25 shots in the final stanza and a career-high 42 for the game in preserving a 3-2 win to keep the Oilers undefeated. The only shot that beat him in the third was a fluttering backhander over a pile of bodies out of a goal-mouth scramble off the stick of Crane. The Oilers stand alone at the top of the Western Conference a perfect 5-0 ahead of the team’s upcoming road trip.

Tulsa hits the road for games Friday in Indianapolis against the Indy Fuel at 6:35pm and Saturday in Moline, IL against the Quad City Mallards at 7:05pm. Both games can be heard online