OILERS HELD DOWN BY EAGLES IN 3-1 LOSS 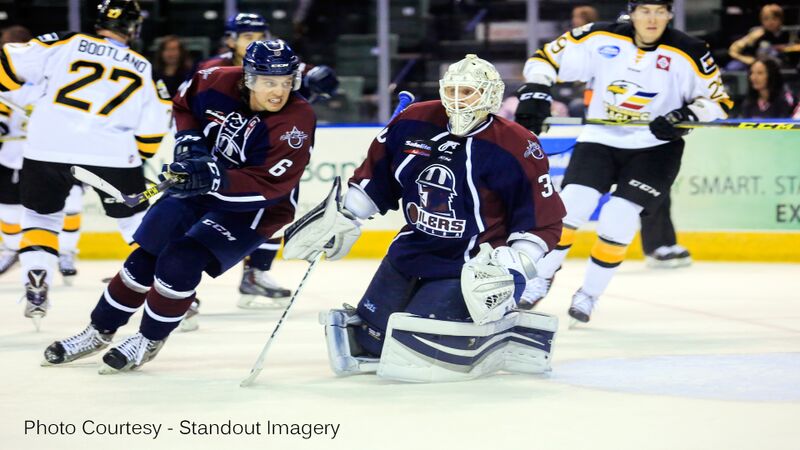 Jussi Olkinuora stood tall in net for Tulsa on Friday night but the Oilers dropped a 3-1 decision to the Eagles.
LOVELAND, CO – The Tulsa Oilers mustered only 12 shots on goal on Friday night in a 3-1 setback to the Colorado Eagles in front of 5,194 at the Budweiser Events Center.  Tulsa was denied a third straight win while the Eagles tasted victory for just the second time in their first nine games.  The Oilers dropped to 4-4-0 as the Eagles improved to 2-6-1 in the first meeting between the two teams since March 12, 2011 when both clubs were members of the Central Hockey League.
Tulsa forward Darian Dziurzynski and Colorado winger Everett Sheen set a physical tone early in the contest by dropping the gloves just 45 seconds into the first period.  The Eagles struck first at the 4:38 mark of the opening frame with a power play goal from defenseman Colin Joe.  With Brandon Wong in the penalty box for slashing, Colorado forward Ludwig Karlsson found Joe open on the top of the near circle and the Edmonton, Alberta native whipped a snap shot through Tulsa goalie Jussi Olkinuora for his first goal of the season.  After Olkinuora made a flurry of close-range saves on a second Eagles’ power play, the Oilers picked up a late equalizer from Dan DeSalvo.  The rookie center won a face off in the Colorado zone and flipped a loose puck at the net that somehow found its way past Eagles’ netminder Kris Lazaruk.  Thanks to DeSalvo’s first professional goal, the Oilers entered the first intermission tied at 1-1 despite being outshot 16-2 in the opening frame.
Neither squad was able to break the tie in the second period but the combative nature of the contest continued.  Eagles’ defenseman Tiegan Zahn went barreling into the Oilers’ crease at 15:46 of the middle frame which sparked a fight and a series of penalties.  Tulsa winger Brady Ramsay duked it out with Colorado’s Derek Rodwell while Oilers’ captain Nathan Lutz was called for roughing and Zahn was given a charging minor.
The stalemate was finally broken by Colorado forward Jordan Kwas at 8:42 of the third period.  Olkinuora denied a shot by Darryl Bootland and stopped the rebound attempt by Jesse Mychan, but could not get in front of the third offering by Kwas.  The even-strength goal provided the Eagles with a 2-1 edge and they would add an insurance tally at 16:22 on a power play tally from Kyle Ostrow.  A delay of game penalty against Dziurzynski gave Colorado a man-advantage and a series of precise passes led to an opening for Ostrow to notch his third goal of the season.
The Eagles more than doubled the Oilers’ shot total in all three periods and finished the tilt with a decided 40-12 shot advantage.  Lazaruk turned aside 11 shots for his first win of the season and Olkinuora dropped to 2-3 on the year despite a 37-save outing.  The Oilers went 0-for-4 on the power play and rolled up 24 penalty minutes, their highest total of the season.  Kyle Bochek, activated from the 21-day IR earlier in the week, played his first game of the season for Tulsa and defenseman Randy Cure, acquired in a trade from Fort Wayne, made his Oilers’ debut on Friday.
The Oilers and Eagles will face off again on Saturday night at the Budweiser Events Center at 8:05 p.m. Central Time.
Final Boxscore
Are you looking for Things To Do in Tulsa?