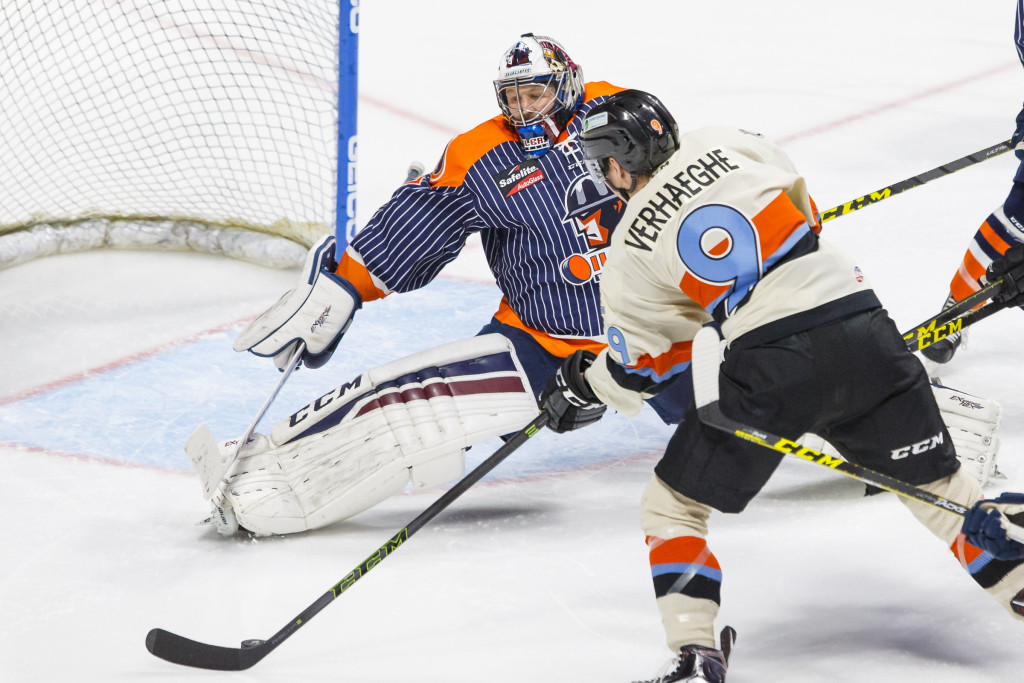 Oilers goalie Kevin Carr slides over to make a save on Carter Verhaeghe (Photo by: Kevin Pyle – www.PhotoPyle.com)

TULSA, OK – The Tulsa Oilers finished off a three game push with a 2-1 loss to the streaking Missouri Mavericks in front of 5,774 fans on a Sunday afternoon at the BOK Center. The emotions of the crowd reflected the gloomy weather outside as the Oilers were defeated by the top team in the ECHL. Tulsa concluded the weekend with four out of a possible six points while the Mavericks polished off a perfect 12-0 month of November.

It was a speedy start for Missouri on Sunday afternoon as the Mavericks struck only 2:29 into the first period when Sebastien Sylvestre cleaned up a rebound in front of the Oilers’ net to give the Mavericks the advantage. Off of an open pass from Adam Pleskach, defenseman Mathieu Brisebois had the Oilers’ best scoring chance of the first period but missed the mark. The Oilers managed only two total shots on net in the first period–tying the team’s season low for shots on goal in a single period.

A franticly played second period kicked off with power play success for the Oilers. With Mavericks’ defenseman Patrick Culity in the bin for interference, Dennis Brown sauced a puck to the stick blade of a posted up Emerson Clark and the newly acquired forward was able to flick the puck past Patrick Milner for the game-tying goal. Carr made 12 of his 29 saves in the second period including an out-of-this-world stop on Carter Verhaeghe.

Rookie forward Phil Brewer faced an empty net opportunity five minutes into the third period and was denied by his own stick when it snapped in full flight. Tulsa’s second power play chance of the night was cut short when Clark took a tripping minor and the Oilers faced 39 seconds on the disadvantage. With 5:09 left in the tied matchup, an egg-like scramble of bodies impaired the vision of Carr just enough for Jesse Root, the leading goal scorer in the ECHL, to bounce in the game winning goal for the Mavs.

Tulsa dropped to 7-8-1-1 on the season and 1-1-1-0 in the season series against the Mavericks. The Oilers will begin December on a seven-game home stand leading off with Rapid City on Wednesday night at 7:05 p.m. at the BOK Center.

Looking for Activities in Tulsa?

Blomqvist on the right circle, goes in on goal, backhander on the left side, knocked away and cleared around to the far side. Brought back out by the Americans into the neutral zone by Gens. Aaron Gens with it, leaves it in the center circle for a teammate. There’s King with it. His shot gets deflected by the stick of Kevin Carr, and it goes on up into the mesh, out of play.

We’ll have a face-off coming up in the Tulsa zone, and it’ll be to the left of Kevin Carr. Brandon Wong against Schultz on the draw. Oilers win it. Along the boards on the near side, slapped out by Nugent into the Allen end.

Nugent comes in to help out, try to keep it in. It came back out over the blue line, delayed offside. Now we’ve got a whistle by the referee and a tripping penalty called on the delayed penalty. It’s going to be Allen’s Chad Costello going to the penalty box. Costello getting called for the tripping penalty and it comes at 1:41 of the period, Costello for tripping, and this will be Tulsa’s 4th power play opportunity of the night, and that’ll bring up another York Plumbing power play for the Oilers. Call York Plumbing, 918-833-3200.

Costello in the box, Tulsa with the man advantage. With it is Harstad on the left side, sends it over on the right, here’s a shot, and it’s caught by the goaltender, Gill, with a pile of players in front of him. He was screened heavily. I don’t know how he saw that come in, but he did, and he made the catch, and he’ll hang on.

We’ll have a face-off here in the Allen end to the left of the goaltender, Riley Gill. 18:03 left to go in this 2nd period, 1:42 left in the Tulsa power play. The Americans get the puck, however, on the draw, and bring it into the Tulsa zone. Handling it is Pinkston, he drops it off in the Tulsa end.

Oilers will get it there. Behind the goal is Harstad. Now he gets it away to Brown. Dennis Brown with it in the neutral zone, in the center circle, over on the right wing, pass over the blue line, the Oilers are offside.

Puck goes into the Allen zone. Behind the goal, Gill will stop it there, gives it away on the left side to Federico. Now he’ll clear it all the way up the length of the ice. That’ll kill some of that penalty time. 56 seconds left in the Tulsa man advantage.

After it is Brisebois. He’ll give it away on the left side to Konan. Now back to Brisebois, center circle. He skates over the blue line, right wing pass. Over on the right for Lalancette. Lalancette with it in the corner. His pass intercepted and cleared away by Eric Roy, and up the length of the ice back into the Tulsa end. 34 seconds to go in the power play for the Oilers.

Tulsa with it in their own zone. Konan ahead for Brewer. Brewer in the center circle with the puck goes over the blue line into the Allen zone. Brewer still with control behind the goal. He gets bumped there by Roy, puck comes free to the near side. Couple of players along the board here on the near side, poking at it. There’s ten seconds left in the power play.