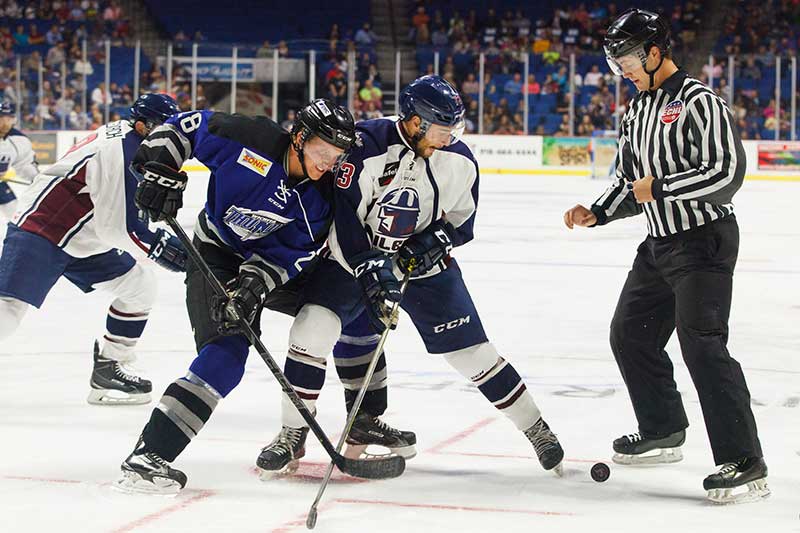 Oilers forward Phil Brewer jockeys for position with Thunder forward Kenton Miller during the third period of the season opener on Friday night at the BOK Center. (photo by: Kevin Pyle – www.photopyle.com)

TULSA, OK – The Tulsa Oilers elation quickly turned to deflation in the closing minutes of Friday’s home opener against the Wichita Thunder. Tulsa forward Brady Ramsay swatted home the game-tying goal with 1:28 remaining in regulation but only nine seconds after the BOK Center erupted, a tricky bounce off the back boards gave Thunder center Kenton Miller an easy go-ahead tally. In Jason Christie’s first game as Tulsa head coach, the Oilers dropped a 3-2 decision in front of 7,685.

The long-time rivals battled to a scoreless stalemate through the first period despite several quality scoring chances for the home side. Brian Nugent was denied by the goalpost on a close-range chance in the opening minutes and late in the frame, with his team shorthanded, Brandon Wong was stopped by Thunder goalie David Shantz after the Oilers’ center pounced on a turnover in Wichita territory.

Nine minutes into the middle frame, it was Miller who broke the scoreless draw by deflecting Dan Milan’s shot from the point through Tulsa goalie Jussi Olkinuora. Wichita increased its lead just 31 seconds later as rookie forward Andrew Deluca scored his first professional goal by placing a shot in the top corner of the cage. The Thunder out-shot the Oilers 13-3 in the period and carried a 2-0 advantage into the closing stanza.

Tulsa’s comeback began at 11:16 of the third as Ben Walker shoveled a loose puck past Shantz to cut the Thunder lead in half. Walker, recently assigned to Tulsa from the Manitoba Moose, netted his second goal as a pro and the first of the Oilers’ season. With Olkinuora on the bench and an extra attacker on the ice in the waning moments of regulation, the Oilers won an offensive zone faceoff and created a frenzy in front of the Thunder net that was capped off by the quick stick of Ramsay. The 22-year old Ramsay had barely finished celebrating when the evening took a sour turn. Seconds after the ensuing faceoff, Olkinuora attempted to play a loose puck at the side of the Tulsa net but couldn’t predict the disc’s trajectory off the end wall. Before Olkinuora could get back between his posts, Miller had slipped the puck into the net.

Each squad finished the night with 24 shots on net and the Oilers were able to successfully eliminate all five Thunder power plays. Oilers’ rookie defensemen Brennan Serville and Tom Kroshus each notched assists for the first points of their pro careers Tulsa, now 3-5-0 in home openers since moving to the BOK Center in 2008, will try to pick up its first win of the season on Saturday night against the Allen Americans.

Are you looking for the best Things To Do in Tulsa?