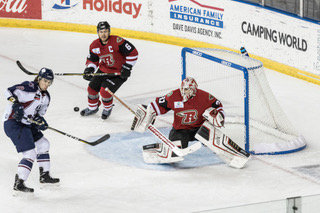 The Oilers outshot the Rush 12-9 in the opening frame and took the lead with 53 seconds to play when Alexandre Ranger lifted a shot over the shoulder of Christian Frey from the right circle on Tulsa’s second power play of the period.

Tulsa scored again on its third power play at 12:12 of the second period to make it 2-0, when Adam Pleskach snapped a shot from the top of the right circle into the top of the net. Charlie Sampair picked up his second assist of the game with the setup pass, and Devin Williams earned the other helper with long stretch pass from the Oilers’ crease. Williams stopped all 14 Rapid City shots in the period, bringing his total to 23 through 40 minutes of play.

Rapid City cut their deficit to one, when Peter Sivak lifted a shot over Williams’ blocker on a 2-on-1, but Garrett Ladd put the game out of reach with an empty net goal in the final minute, behind the third assist from Sampair. Williams finished with 29 saves for his 14th win of the season.

The Oilers return home for two games against the Wichita Thunder on the York Plumbing Ice at the BOK Center at 7:05pm Saturday and 4:05pm Sunday. Saturday’s game will be Alzheimer’s Awareness Night, presented by Precision Screen Manufacturing. Proceeds from in-game donations, purple merchandise sales, and commemorative pucks, as well as the postgame jersey auction will benefit the Alzheimer’s Association of Oklahoma. Tickets are available by calling 918-632-7825 or visiting www.tulsaoilers.com.