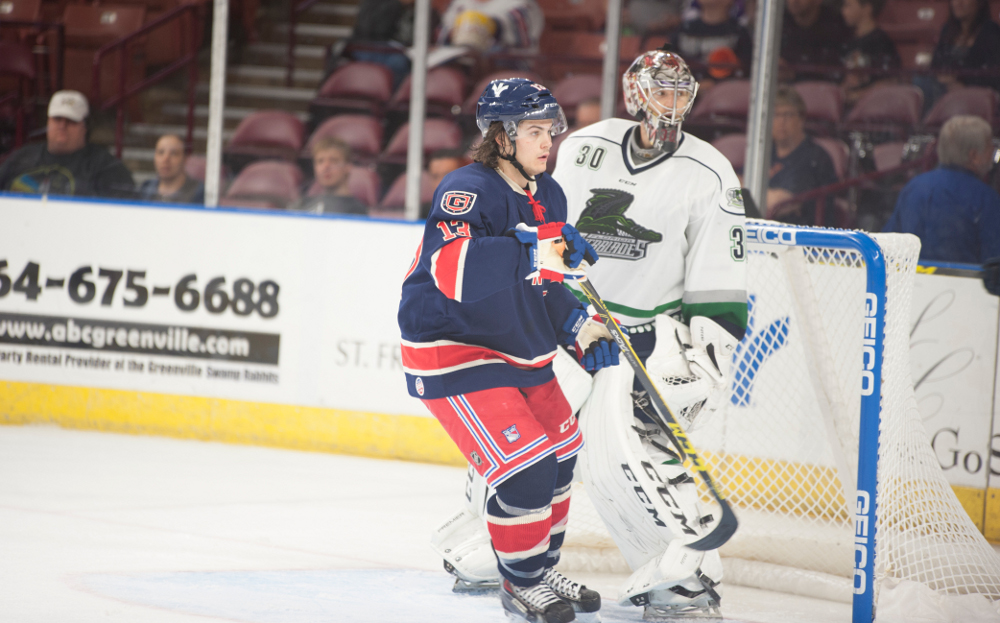 Emerson Clark (above) has been acquired by the Oilers in a trade with the Greenville Swamp Rabbits (photo courtesy: Swamp Rabbits Media Relations)

TULSA, OK – The Tulsa Oilers, proud ECHL affiliate of the Winnipeg Jets and Manitoba Moose, announced a trade on Thursday that sends forward Darian Dziurzynski to the Greenville Swamp Rabbits in exchange for forward Emerson Clark.

Clark, 22, recorded three goals, two assists, and 25 penalty minutes in nine games this season for Greenville.  A third year pro from Whitby, Ontario, Clark appeared in 62 games for Greenville during the 2014-15 season and posted 25 points (16 goals, 9 assists) to go along with a team-high 217 penalty minutes.  In his rookie campaign of 2013-14, Clark, 5-foot-10, 180 pounds, split his time between the Toledo Walleye and Greenville.  He played 25 games for each squad and finished the season with combined totals of five goals, 11 assists, and 231 penalty minutes.  Prior to turning pro, Clark played three seasons for the Oshawa Generals (OHL) and finished his major-junior career with one season for the Windsor Spitfires (OHL).  In each of his four junior seasons, Clark put up at least 100 penalty minutes and twice led his club in the category.

Dziurzynski departs Tulsa after appearing in nine of the Oilers’ first ten games of this season.  The Prince Albert, Saskatchewan native registered two goals, two assists, and 16 penalty minutes during his time in Tulsa colors.  The 24-year old notched his first two fighting majors of the season with a pair of bouts last weekend against the Colorado Eagles and ranked second on the Oilers’ roster in penalty minutes. Dziurzynski was signed by the Oilers after playing each of the previous three seasons for the Portland Pirates of the American Hockey League. In 190 total games over a four-year pro career, Dziurzynski has compiled 28 goals, 19 assists, and 337 penalty minutes.

The Oilers dropped a 2-1 shootout decision to the Wichita Thunder on Wednesday night and return to home ice this Friday at 7:05 p.m. to take on the Allen Americans on Budweiser Military Night benefiting Folds of Honor.  Tickets start at $15 and all veterans and military members can receive a $10 discount in the Group Zone, Plaza, and Premium sections by presenting a valid military ID at the BOK Center box office. For more information, call 918-632-7825 or log on to www.tulsaoilers.com.

Are you looking for the top Things To Do in Tulsa?