Tulsa and Rapid City swap defensemen, while Phillips and Kessy return to Manitoba in separate transactions. 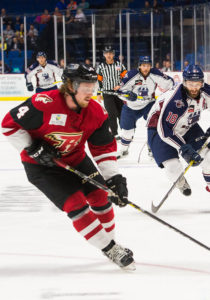 Haar, 23, comes to Tulsa after compiling 12 assists in 28 games for the Rush this season. The Huntington Beach, CA native spent all of 2015-16 with the Alaska Aces, and was an ECHL All-Star as a rookie in 2014-15 with the South Carolina Stingrays. Haar spent two seasons at Western Michigan University, where he was teammates with Oilers defenseman Dennis Brown, before finishing his amateur career in 2013-14 with the WHL’s Portland Winterhawks.

Phillips heads to Manitoba for the second time this season after starting in goal for the ECHL All-Stars, where he stopped 12 of 13 shots in 25 minutes of action. The rookie out of Michigan Tech University posted a 19-10-2 record with a 2.63 goal-against average, .913 save percentage and one shutout in 31 appearances.

Kessy recorded 16 points (6g, 10a) in 18 games, including five multi-point games and one power play goal. This is the second time in 2016-17 that the Shaunavon, SK native has been loaned to Manitoba on a tryout agreement.

Noreau tallied three assists in 18 games for Tulsa after the Oilers acquired him in a trade with Norfolk on December 12. The defenseman from Montreal, QC also skated in 18 games for the Admirals and two for the Missouri Mavericks earlier this season.

Tulsa returns home for the first time since New Years Day on Saturday to host the Idaho Steelheads at 7:05pm at the BOK Center. The Oilers will wear special jerseys honoring the 65th year of Tulsa Oilers hockey dating back to 1928. The player-worn jerseys will be auctioned off after the game in the OneOK Club on the concourse level. The two teams will skate again in the rematch Sunday at 4:05pm, and fans will have an opportunity to skate with the players after the game.