Tulsa scores two in the third period, but Eagles hold off late comeback to earn 3-2 win in final meeting between the teams.

LOVELAND, CO – The Tulsa Oilers scored two third period goals in a valiant comeback effort Wednesday, but were defeated 3-2 by the Colorado Eagles in the final meeting of the season between the teams at the Budweiser Events Center. 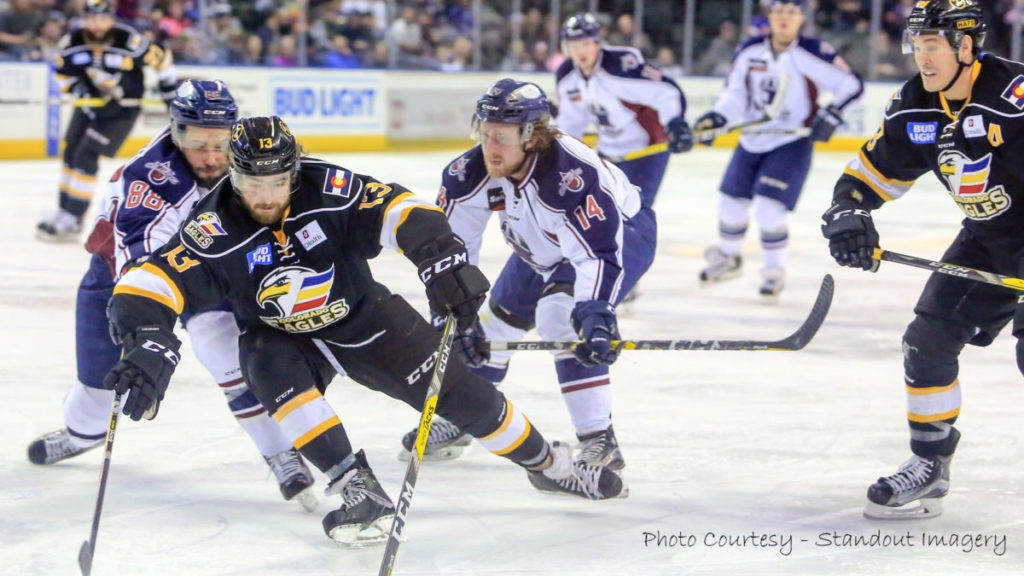 The Eagles struck first on a quick wrist shot from the slot by Luke Salazar with 7:22 left in the opening period. Colorado took the 1-0 lead into the locker room. Shots were even at 7-7, as Tulsa was unsuccessful on two power plays, and Colorado failed to convert on their only opportunity.

ECHL All-Star MVP Matt Garbowsky gave Colorado their second goal 3:39 into the middle period, before Mitch Holmberg deflected in a Cody Corbett shot on an Eagles four-minute power play to make it 3-0 at 5:05 of the frame. Colorado outshot Tulsa 18-4 in the period and led by three entering the third.

Shawn Bates spoiled Eagles goaltender Clarke Saunders shutout bid when he scored for Tulsa on a rebound 4:41 into the third period to make it 3-1. The Oilers cut the deficit to one with three minutes left in regulation and goaltender Keegan Asmundson pulled for an extra attacker. Emerson Clark scored the goal after a centering pass kicked out to him at the bottom of the right circle.

Tulsa’s comeback bid came up just short, as the Eagles hung on to win 3-2. Asmundson stopped 29 of 32 shots in his first Oilers start, while Saunders stopped 22 of 24 in the win.

UP NEXT: The Oilers continue further west for two matchups with the Mountain Division’s Utah Grizzlies Friday and Saturday at the Maverik Center in West Valley City, UT. Both games are scheduled for 8pm CST and can be heard on www.tulsaoilers.com, “Listen Live”, or seen on ECHL.TV, with coverage starting at 7:45.