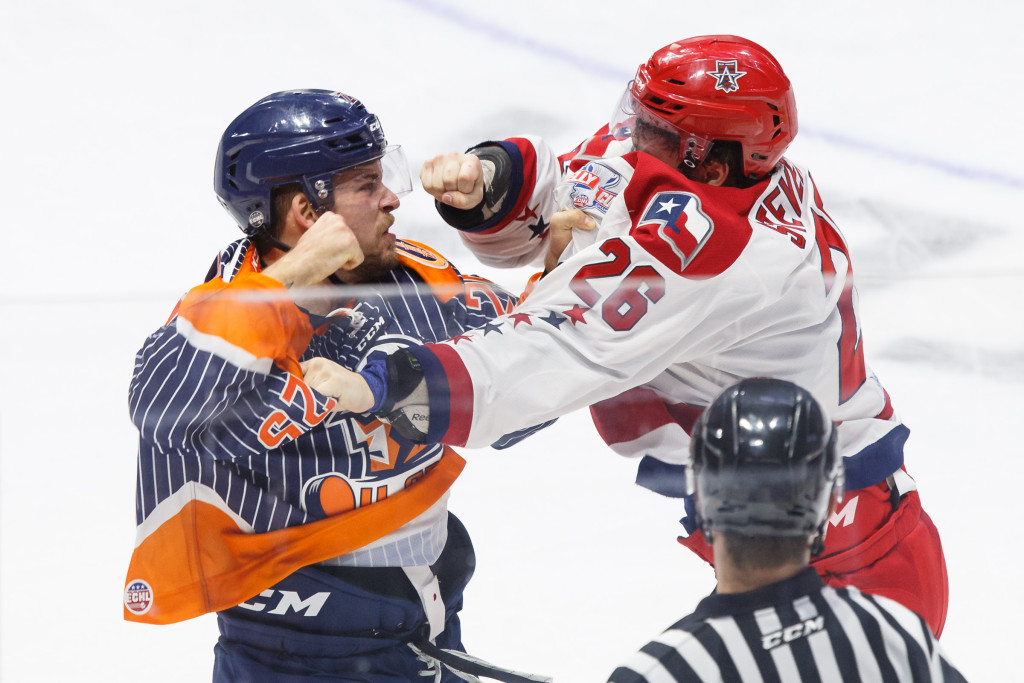 Mathieu Gagon (left) throws his fist toward the face of Dyson Stevenson during a first period fight at the BOK Center on Sunday night. (photo by: Kevin Pyle – www.photopyle.com)
TULSA, OK – The Tulsa Oilers concluded a stretch of three games in three days with a 4-3 setback to the Allen Americans on Sunday evening in front of 4,870 at the BOK Center.  Americans’ forward Chad Costello scored two goals and assisted on another to lead his current club past his former club and level the season series between Tulsa and Allen and three wins apiece.
It was Costello who provided the game’s first goal at 7:52 of the first period with a half-slap shot from the right face off circle that beat Tulsa goalie Kevin Carr to the blocker side.  With just over five minutes remaining in the opening frame, Oilers’ forward Mathieu Gagnon went punch-for-punch with Americans’ forward Dyson Stevenson.  Both players threw a series of heavy right hands before being separated by the linesmen.  Gagnon’s tussle gave the Oilers at least one fighting major in seven of the last eight games but the home side trailed 1-0 at the end of the period.
The Americans’ lead grew to 2-0 at 9:59 of the second period when Jonathan Parker swatted a power play rebound into the back of the net for his sixth goal of the season.  Five minutes later, Gagnon parked himself in front of the Allen net and put the Oilers on the board by re-directing an Adam Pleskach pass through the legs of Americans’ goalie Joel Rumpel.  Gagnon’s first goal of the season pulled the Oilers back within one but the Americans got their two-goal edge back in the final minute of the period.  A pass from Costello out of the corner of the Tulsa zone bounced to Casey Pierro-Zabotel and the Ashcroft, British Columbia native snapped a shot past Carr for his seventh strike of the season.
Costello notched his third point of the contest at 4:30 of the third when his power play slap shot was deflected in by Vincent Arseneau to swell the Allen advantage to 4-1.  The Oilers’ comeback bid began just before the halfway point of the period thanks to a rebound strike from close range by Adam Pleskach.  The third-year winger, who scored a hat-trick on Saturday in Allen, potted his fourth goal in the last two games to cut into the deficit.  Rookie center Christophe Lalancette stuffed home a loose puck at 15:13 to extend his point streak to three games but the Oilers were not able to find the equalizer before time expired.
Tulsa claimed three of a possible six points over the weekend (1-1-1-0) and fell back to two games below .500 overall at 5-7-1-1.  After the home team earned victories in each of the first three meetings between the Oilers and the Americans, the road squad has now posted three consecutive wins.  The Oilers went 1-for-5 on the power play on Sunday night and have scored on the man-advantage in four of their last five outings.  Tulsa set a new season high with 29 penalty minutes and dropped to 0-7-1-0 when surrendering the first goal of the game.
The Oilers return to action on Friday, November 27 at 7:05 p.m. to face the Wichita Thunder at the BOK Center
Final Boxscore
Are you looking for things to do in Tulsa?