OILERS COME FROM BEHIND TO STUN STEELHEADS IN OT

Tulsa bounces back from a 3-0 deficit to force overtime in the final minute of regulation, setting up Roman Ammirato’s winning goal in Boise.

BOISE, ID – The Tulsa Oilers (6-1-4) battled back from a 3-0 deficit to force overtime in the final minute of regulation and rookie Roman Ammirato scored with 15 seconds left in overtime to complete a 5-4 comeback win over the Idaho Steelheads (5-7-2) Saturday at CenturyLink Arena. 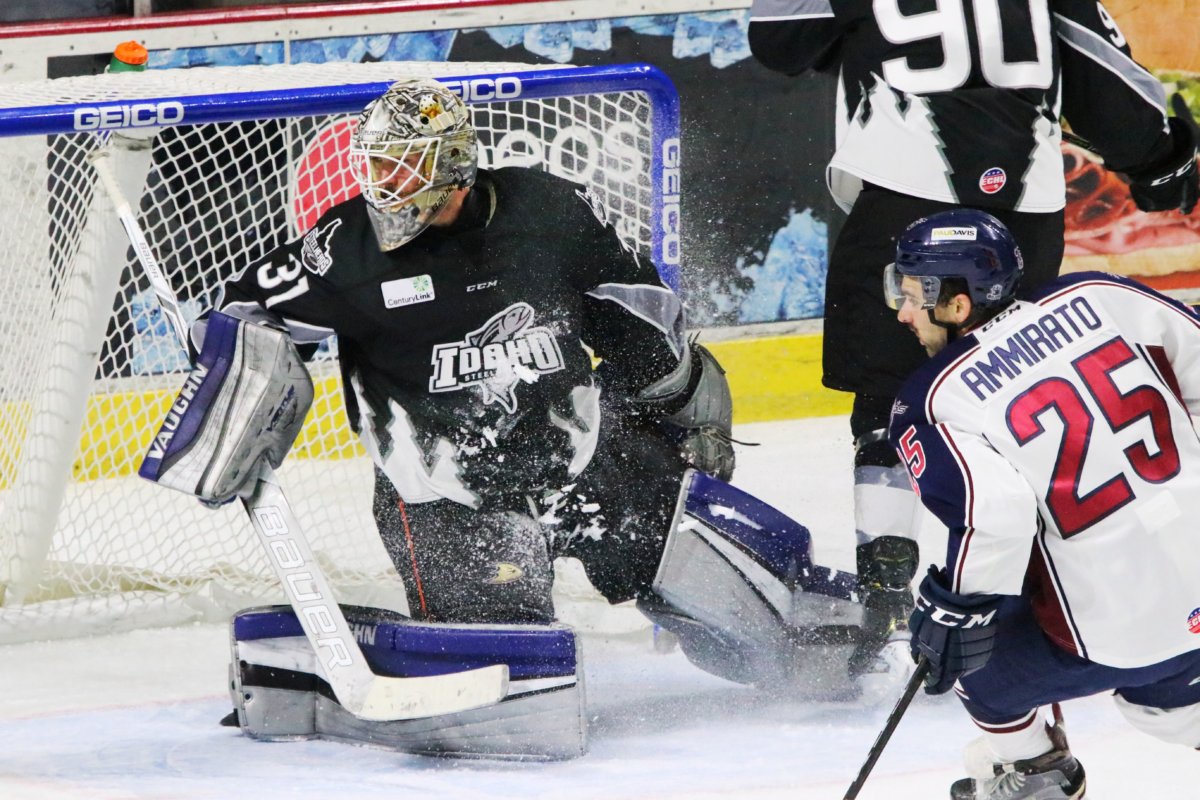 Idaho flipped the script from Friday night by scoring the first three goals Saturday in the opening frame. A.J. White started things off for the Steelheads with a deflection in front of the Oilers net 3:28 into the game. Spencer Naas capitalized on an Oilers turnover and ripped a shot under the crossbar to make it 2-0, and Steve McParland scored for the second straight game after Tulsa struggled to clear the zone.

Tulsa stopped the Steelheads’ momentum when Steven Kaunisto scored with 2:57 left in the first period for his first goal of the season, bringing the score to 3-1 after one.

It looked like the score would stay the same through the middle 20 minutes, but Ammirato scooped up a loose puck on the edge of the crease and lifted a shot into a tight space in the back of the Idaho net. That goal brought the Oilers to within a goal with 51 second left in the period.

The Steelheads added some insurance early in the third period, when Nolan Gluchowski spun free in the slot and lifted a backhander over the blocker of Oilers goaltender Devin Williams to make it 4-2. Cue Tulsa’s comeback. Captain Adam Pleskach hammered in a goal from the edge of the crease on a power play to bring the Oilers back to within one.

The Oilers forced overtime when Stephen Perfetto picked up his third point of the night, a goal from the right circle with 55.9 seconds left on the clock and Williams pulled for the extra attacker. Ammirato completed the comeback when he blasted a one-timer from the slot over the glove of Idaho goalie Ryan Faragher with 15 seconds left in overtime.

The Oilers finish off a four-game road swing next Friday against the Allen Americans at 7:05pm at the Allen Event Center. Catch the action on The Sports Animal (99.9FM/1550AM), www.tulsaoilers.com, and ECHL.TV, with pregame coverage starting at 6:45pm.

Tulsa returns home next Saturday, Nov. 17 for a rematch with the Americans at 7:05pm on the York Plumbing Ice at the BOK Center. The Oilers will be celebrating Tulsa Flag Night, as the players will wear special jerseys bearing resemblance to the Tulsa flag. Stick around for the postgame auction of the game-worn jerseys on the BOK Center concourse.