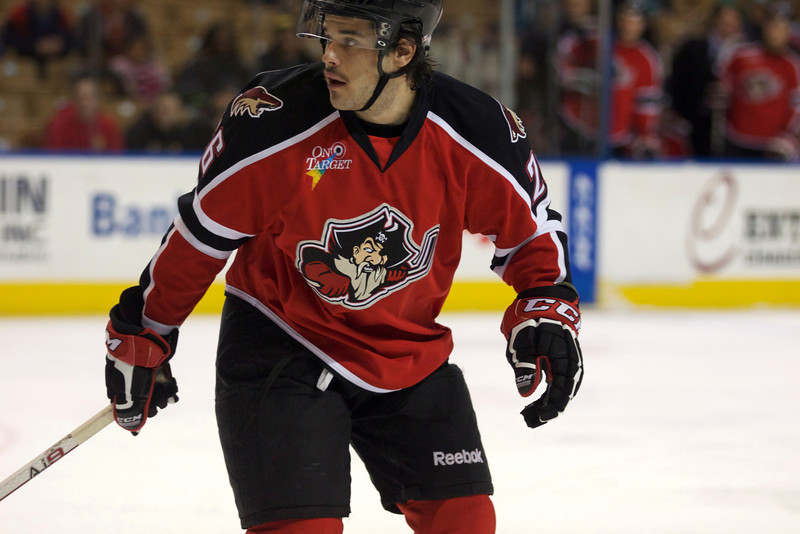 TULSA, OK – The Tulsa Oilers, proud affiliate of the Winnipeg Jets and Manitoba Moose, added to their training camp roster today with the signing of forward Darian Dziurzynski (dur-ZIN-skee).

A fifth-round pick of the Arizona Coyotes in the 2011 NHL draft, Dziurzynski played the last three seasons for the Portland Pirates of the American Hockey League. In the 2014-15 campaign, Dziurzynski, a native of Prince Albert, Saskatchewan, appeared in 68 games and recorded 15 goals, three assists, and 51 penalty minutes. The 24-year old notched 16 points (9 goals, 7 assists) during his rookie season of 2012-13 and set a career-high with 183 penalty minutes in the 2013-14 season. Before turning pro, the 6-foot-1, 204-pound Dziurzynski spent four years as a member of the Saskatoon Blades (WHL) and finished his major-junior career with the Brandon Wheat Kings (WHL). Dziurzynski enjoyed his best junior season in 2010-11 when he registered 35 goals and 22 assists in 72 games for the Blades.

Oilers’ training camp continues Friday at 1:45 p.m. at the Oilers Ice Center (6413 S. Mingo Rd.). The Oilers will hold a Blue-White scrimmage on Saturday, October 10 at 7:45 p.m. at the Ice Center. The scrimmage is open to the public and admission is free for all ages.