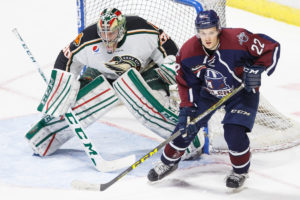 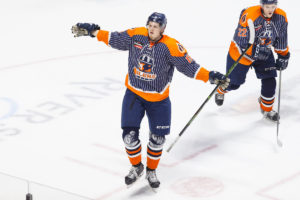 Hoffman, 25, arrives in Tulsa for his second pro season, after spending 2015-16 with Quad City. The Wilkie, Saskatchewan native went 19-17-1 with a 2.78 goals-against average and .911 save percentage in 40 appearances. Hoffman spent three college seasons at the University of Vermont, where he went 34-33-9 in 78 appearances, before turning pro. He signed with the Thunder in the offseason, but did not appear in a game while in Adirondack.

Blomqvist, 21, returns to the Oilers, where he recorded five goals and five assists in 25 games in 2015-16. The second-year forward from Osby, Sweden also played 33 games last season for the Moose, where he scored one goal and added four assists. The 6’7”, 220 lbs forward signed with the Jets after posting 148 points (56 goals, 92 assists) in 185 junior games split between Lethbridge, Victoria and Moose Jaw in the WHL.

Tulsa takes on the Indy Fuel at 6:35pm CST tonight at Indiana Farmers Coliseum in Indianapolis. The Oilers then head to Moline, IL for a meeting with the Quad City Mallards at 7:05pm CST at iWireless Center. Both games can be heard on www.tulsaoilers.com by clicking on “Listen Live”. Fans can also watch the games on ECHL.TV, and can switch to the away broadcast.