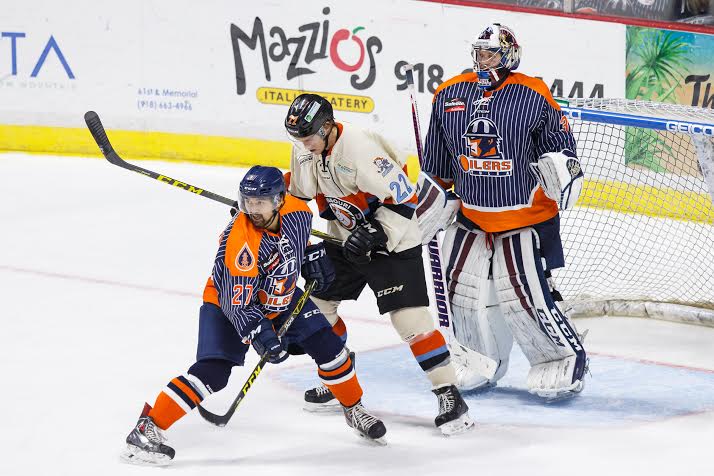 WEEK IN REVIEW
The Oilers gained four out of a possible six points after a three-game in three-days weekend going 2-1-0-0. After back-to-back victories over the Wichita Thunder Friday at home and Saturday in Wichita, Tulsa fell to the Missouri Mavericks on Sunday.

Goaltender Kevin Carr notched his second shutout of the season in a 2-0 win in Tulsa over the Thunder on Friday in the BOK Center. Rookie defenseman Justin Mansfield marked his first goal of the season and first professional goal, unassisted.

With a win on Saturday in Wichita, the Oilers are now on two-game road winning streak for the first time this season. Due to a breakout of four fights during the contest, Tulsa painted a season high of 32 penalty minutes.

In the weekend finale on Sunday against Missouri, a third period goal by ECHL leading goal scorer, Jesse Root, cut off the Oilers two-game winning streak. Tulsa was defeated by the Mavericks 2-1.

LOOKING AHEAD
The Oilers will play two games this week splitting time between the Rapid City Rush on Wednesday and the Utah Grizzlies Thursday. Tulsa is 10-11-1 all-time against the Rush at home. Thursday’s $1 beer night matchup will be the first time the Oilers square off with the Utah Grizzlies in franchise history. The Grizzlies were the former squad of Oilers’ Head Coach Jason Christie during the 2005-08 campaigns.

HOME FOR THE HOLIDAYS
December kicks off with seven straight home games for the Oilers. The Oilers will remain in the BOK Center through December 21st.

ROLLING OUT THE WELCOME “MAT”T
Last week, the Oilers acquired goaltender Matt Grogan and defenseman Mathieu Brisebois. Grogan joins the Oilers after his start in the SPHL with the Mississippi RiverKings where helped his team gain four wins in his four games played. Brisebois, a 23 year-old Quebec native, suited up for all three contests this weekend and recorded a +1 rating. 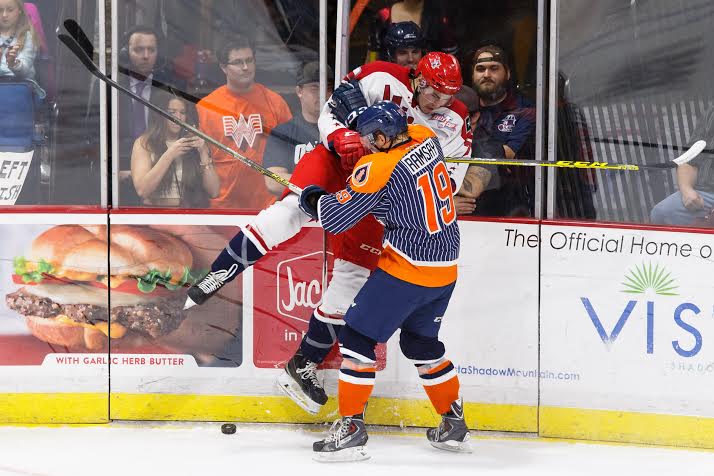 The Tulsa Oilers take on the Allen Americans at the BOK Center November 22, 2015 in Tulsa, Oklahoma. Photo / Kevin Pyle

EXTRA DROPS
There have been 19 fights in the 17 Oilers games this season—averaging the boys in blue to more than one fight per game. Six of those games have been multi-fight contests… Jason Christie is only one victory away from tying (two from breaking) the record of all-time ECHL wins by a head coach…Kevin Carr now ranks fifth amongst goaltenders in the ECHL with a 1.82 goals against average…Since being acquired in a trade from Greenville, Emerson Clark has six points in six games with the Oilers (4 goals, 2 assists).

Find the top Activities in Tulsa!

Jeff: Back with you here in Allen, Texas. Jeff Brucculeri with Tulsa Oilers Hockey, and we are in the 1st intermission. Our score, the Allen Americans one, the Tulsa Oilers nothing after one period of play.

Then there won’t be any games for the next few days. Taking off some time for Christmas, so no games for the 22nd, 23rd, 24th, or 25th. The next four days are off days for the league, and then several teams will return to action on the 26th, this coming Saturday, the 26th, including the Tulsa Oilers who will be on the road in Wichita this coming Saturday. Game time, by the way, in Wichita is a 7:00 face-off on Saturday night.

There will be 12 games on the schedule this coming Saturday, the 26th, after the four-day break. Again, 7:05 face-off for Tulsa at Wichita coming up on Saturday. We hope you’ll enjoy the holiday, enjoy some time off, enjoy the Christmas break with your families, and I know some of the players are going to do the same, and then we’ll reconvene and I think some of the players will have a couple of days off, and that sort of a thing, and reconvene with the Oilers on Christmas day, I believe. We’ll all head up to Wichita on Saturday, Boxing Day, December 26.

There was a little discrepancy on the shots on goal. Not exactly sure which is correct. The game sheet has it as shots on goal 9-9, but on the scoreboard, it was a little different, and now they have the scoreboard turned off in place of a video, so I can’t tell you what it is. It was 10-8, something like that. I’m not sure which is correct. I’m going to assume the official game sheet is the one that is correct, but that’s what we’re going to go with.

We’re getting set to start this 2nd period of hockey here in Allen, Texas. Face-off at center ice. All right, here we go with the center ice face-off.

DeSalvo on the draw for the Oilers. Allen gets the puck, they bring it up on the right wing, slapped in the zone by Crane, around the boards to the far side, and cleared out by the Oilers into the neutral zone. The puck comes free again, slapped away by the Americans.

Back into the Americans’ zone. They recover the puck and bring it back out. Over on the right wing for Parker, he comes over the blue line, gives it to Crane. Centering pass broken up by Blomqvist. Blomqvist with it, gets it away on the right wing. Now he gets it back.