Tulsa prepares for three home games against the top two teams in the Mountain Division this week. 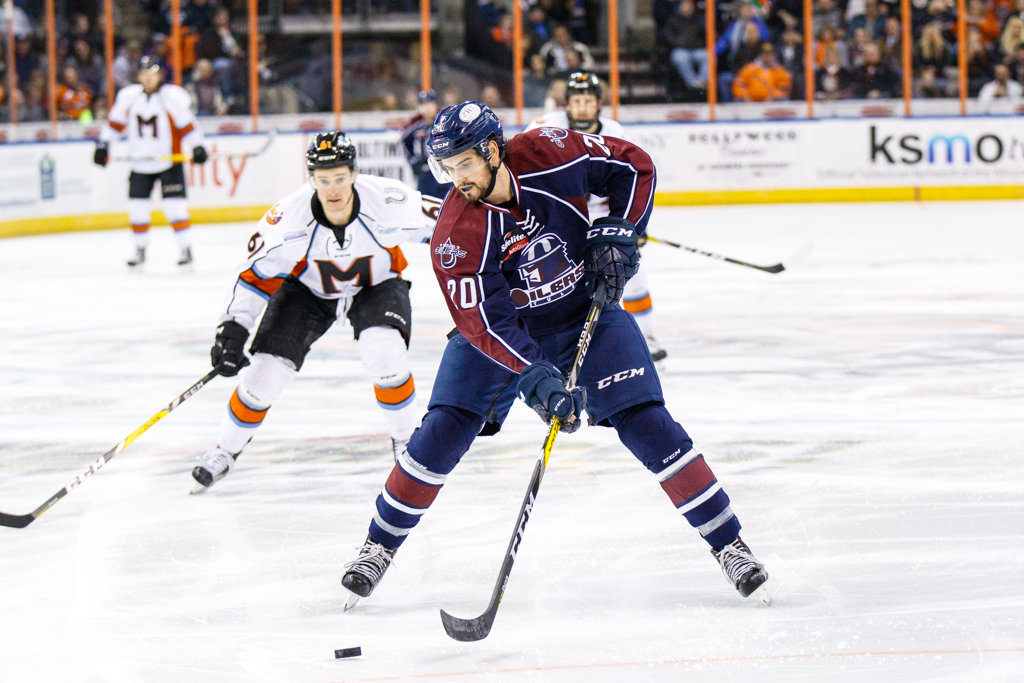 On Teddy Bear Toss Night in Tulsa, the Oilers jumped out to a 2-0 lead in the first period, thanks to goals by Garrett Ladd and Darcy Murphy. Ladd’s goal with 7:46 left in the frame sent the teddy bears flying onto the ice, which were then donated to the Salvation Army. The Mavericks, however, scored three second period goals to overcome the deficit, and goaltender Josh Robinson preserved Missouri’s victory with 12 saves in the third period.

Tulsa again jumped out to an early lead in the rematch, when Ben Murphy deflected in a centering pass 2:36 into the game. For the second night in a row, Missouri reversed the score in the second period, when Sam Povorozniouk and Dane Fox each tallied goals 1:44 apart to take a 2-1 lead. But the Oilers had an answer, when Phil Brewer tipped in a Wes Cunningham shot 51 seconds after Fox’s goal. The two teams skated through a scoreless third period and overtime, and in a seven-round shootout, Dmitri Ognev scored the winning goal for Tulsa, and Jamie Phillips stopped five of seven Mavericks shooters.

Former Oilers forward Dan DeSalvo signed his first AHL contract last week with the Manitoba Moose. DeSalvo has 13 points (7 goals, 6 assists) and a plus-2 rating in 13 games with the Moose…Forward Kale Kessy has recorded one assist in 10 games with Manitoba since his call-up in early November.

Captain Nolan Julseth-White is 5 games from 250 as a pro, including his time in the ECHL, AHL and France…Danick Gauthier needs just 4 more ECHL games to reach 200 for his career.

Wednesday is “Dollar Hot Dog Night” at the BOK Center, when the Oilers host the Alaska Aces at 7:05pm. It will be the first meeting between the two teams in franchise history, and the only meeting this season. Fans can visit the designated hot dog stand on the concourse for $1 hot dogs!

Bring a blanket to donate to support the Volunteers of America and Unifirst’s Annual Blanket Drive on Friday, December 16 when the Oilers host the Colorado Eagles at 7:05pm at the BOK Center!

The first 1,000 kids under 12 who enter the BOK Center on Saturday, December 17 will receive a youth hockey jersey, courtesy of York Plumbing. Gates open at 6pm, and the Oilers take on the Colorado Eagles at 7:05.

The Oilers will wear special Ugly Christmas Sweater themed jerseys on Saturday, when they take on the Colorado Eagles at 7:05pm at the BOK Center. After the game, the jerseys will be auctioned off in the OneOK Club on the Concourse Level.