Tulsa wins three out of four to stay atop ECHL standings, moves to 7-0-0 at BOK Center. 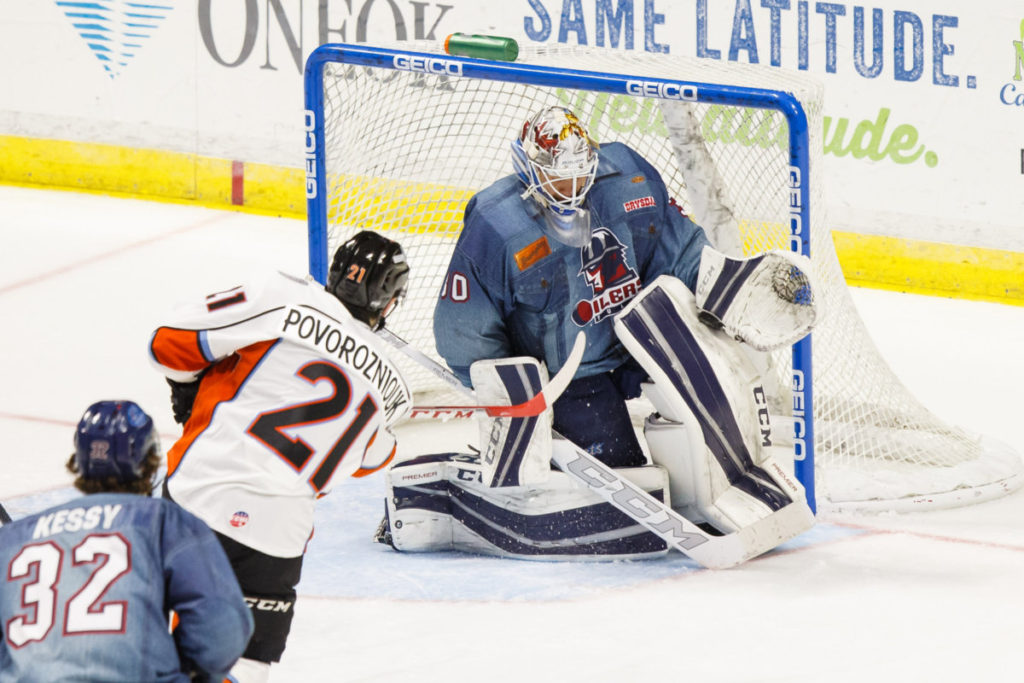 In a battle of the two Western Conference division leaders, Tulsa and Utah exchanged leads three different times, with the Oilers ultimately winning 5-3, after a Phil Brewer empty-net goal to beat the buzzer. Jiri Fronk posted his first professional hat-trick to lead the charge, and Jamie Phillips extended his impressive rookie record to 7-0-0. Tulsa’s points leader Dan DeSalvo contributed the other Oilers goal to extend the team’s home record to 5-0-0.

In the first of 11 meetings between the two former division rivals, Missouri scored the only first period goal and led for most of the game. Adam Pleskach evened the score on a deflection early in the third period, and the fourth-year Oiler added a second goal to give Tulsa the lead for good. DeSalvo provided an empty-netter to extend the Oilers league-best record to 8-1-0, giving Phillips his eighth straight win to start the season.

The rematch with the Mavericks did not go the Oilers’ way from the get-go, as Missouri jumped out to a 3-1 lead after one. Axel Blomqvist scored the only Tulsa goal in the opening frame. The Mavericks opened their lead to 5-1 early in the second period, before Garrett Ladd scored against his former team. With the Oilers trailing 6-2, Christophe Lalancette cut the lead in half, his fifth straight game with a point. But Missouri answered with a goal at the end of the frame, as Lukas Lofquist recorded a hat-trick. The Mavericks would add three more goals in the third period against Oilers goaltender Brody Hoffman, who suffered his second loss of the season.

After a scoreless first two periods, Ladd scored his second goal in as many games to break the deadlock, and veteran Danick Paquette added a second goal to put Tulsa in front 2-0 early in the third period. Phillips earned his first professional shutout with a 30-save performance, extending his record to 9-0-0 on the season. The ECHL Goaltender of the Month in October now leads the league in wins, saves and minutes. Kale Kessy pocketed an empty-net goal to seal the 3-0 victory.

Rookie forward Darcy Murphy signed a tryout agreement with the Manitoba Moose early in the week, making him the first Oiler to get called up to the AHL this season…Murphy scored a goal in his first AHL game Wednesday in his first game…After his hat-trick Wednesday against Utah, Jiri Fronk was called back up to Manitoba, where he also scored in his first game back in the AHL.

Rookie goaltender Jamie Phillips started his pro career by winning his first 9 starts, earning him the ECHL’s Goaltender of the Month for October…Phillips leads the ECHL in wins (9), minutes (549) and saves (266)…Christophe Lalancette saw a streak of points in five straight games (three goals, two assists) end Sunday in the Oilers’ 3-0 win against Utah. The streak matched the mark set by Wes Cunningham when he recorded six assist his Tulsa’s first five games…Dan DeSalvo had goals in four straight home games, and points in six straight (10 points) before Sunday’s 3-0 win over Utah.

The Oilers have won six consecutive home games (6-0-0) and are one of three Western Conference teams still unbeaten on home ice (Utah: 4-0-0, Missouri: 2-0-0)…Tulsa is 5-1-0 in one-goal games, but all of the Oilers’ games this week were decided by two goals or more .

Wednesday is “Dollar Hot Dog Night” at the BOK Center, when the Oilers host the Fort Wayne Komets at 7:05pm. Fans can visit the designated hot dog stand on the concourse for $1 hot dogs!

The Oilers will be wearing special gold jerseys Friday night, honoring the famous Golden Driller monument in Tulsa, sponsored by The Jim Sports Bar, when the team hosts the Wichita Thunder at 7:05pm at the BOK Center Saturday night. After the game, those player-worn jerseys will be auctioned off in the OneOK Club on the concourse level.