Tulsa travels to Texas to face Americans Friday and Saturday, before returning home for three of final five games at BOK Center.. 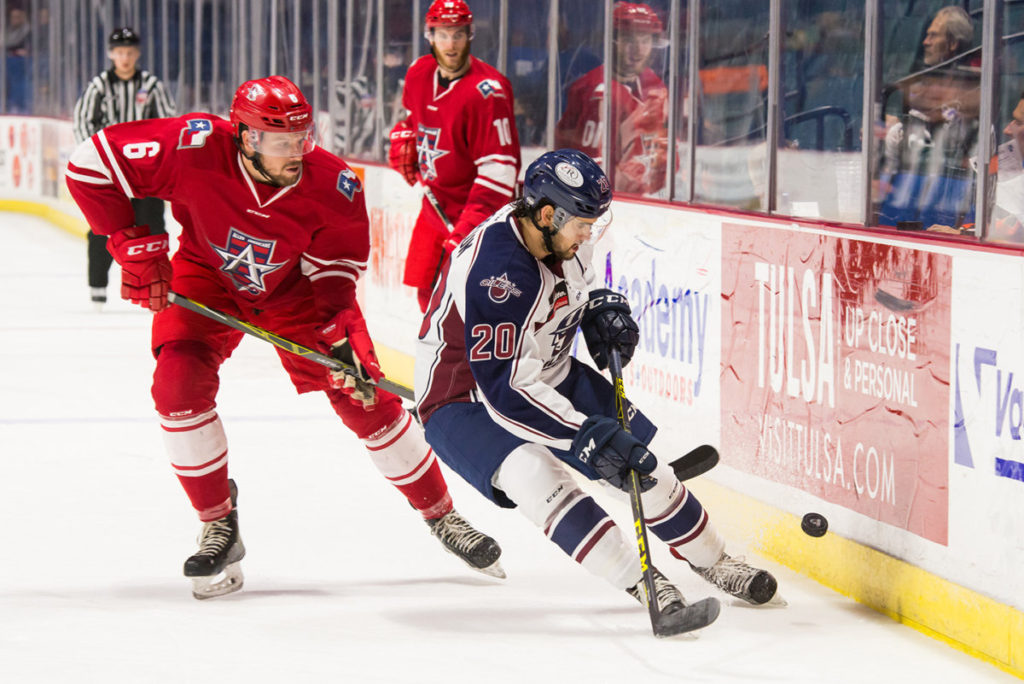 The Komets capitalized on a first period power play to take a 1-0 lead at 11:45, when Garrett Thompson tapped in a centering pass from the edge of the crease. Mike Embach made it 2-0 just 1:19 later on a wrist shot from the right circle. Fort Wayne led 2-0 after one, and the score held through 40 minutes. The Oilers out-chanced the Komets, but Pat Nagle stopped all 32 Tulsa shots for the shutout. Jamie Schaafsma added an insurance goal midway through the third period to complete the scoring.

Forward Shawn Bates gave the Oilers a 1-0 lead late in the first period in the first-ever meeting between Tulsa and Toledo. The Walleye scored four times in the middle frame, including three power play goals in the first 4:14 of play. Shane Berschback tied the game on a 5-on-3 man-advantage, and Tyson Spink scored 26 seconds later to give Toledo the lead. Dane Walters made it 3-1 on a separate power play, before Tulsa’s Alexandre Ranger scored to close the gap. J.P. LaFontaine buried the eventual game-winner late in the stanza as the Walleye led 4-2 after two. Dylan Hubbs made things interesting when he scored for the Oilers with 4:46 left in the third, but Tulsa’s comeback came up short.

After a scoreless first period, Landon Oslanski fired a shot through a screen 30 seconds into the middle stanza to put Toledo on the board first. The Walleye carried that narrow advantage into the third, but Dennis Brown ripped a shot past Jake Paterson to tie the game. Zach Nastasiuk put Toledo back in front 1:20 later on a play that appeared offside, as the Oilers were changing. Tulsa had an answer again, as Alexandre Ranger scored his second in as many nights to force overtime. On a power play in the extra period, Tylor Spink snuck a slap shot past P.J. Musico to give Toledo the win.

Oilers forward Kale Kessy signed a tryout agreement Tuesday with the Manitoba Moose, his third stint with Tulsa’s AHL affiliate. Kessy has one assist in 12 games for Manitoba this season. He also totaled 23 points (11g, 12a) in 32 games with the Oilers…Forward Dan DeSalvo registered a two-point game (1g, 1a) Saturday in Manitoba’s 5-3 win over Rockford. DeSalvo now has 33 points (15g, 18a) in 55 games for the Moose…Goaltender Jamie Phillips stopped 31 of 32 shots in a 2-1 shootout loss Friday against Rockford. Phillips is 1-2-1, with a 2.89 goals-against average and .910 save percentage in 6 appearances with the Moose.

Forward Alexandre Ranger has goals in back-to-back games and is on a 3-game point streak (2g, 2a)…Defenseman Dennis Brown has points in back-to-back games…P.J. Musico has started 5 consecutive games in net for the Oilers, the third longest streak this season, behind Colin Stevens (12) and Jamie Phillips (6)…Kale Kessy has 5 fights in his last 4 games, and fought three separate times Friday in Toledo.

The Oilers are still mathematically alive for a playoff spot, but trail the Kalamazoo Wings by 12 points for the final position in the Central Division with only 7 games to play…11 different Oilers have recorded 20 or more points this season, while 4 players have hit the 30-point plateau (Garrett Ladd, Phil Brewer, Darcy Murphy and Christophe Lalancette).