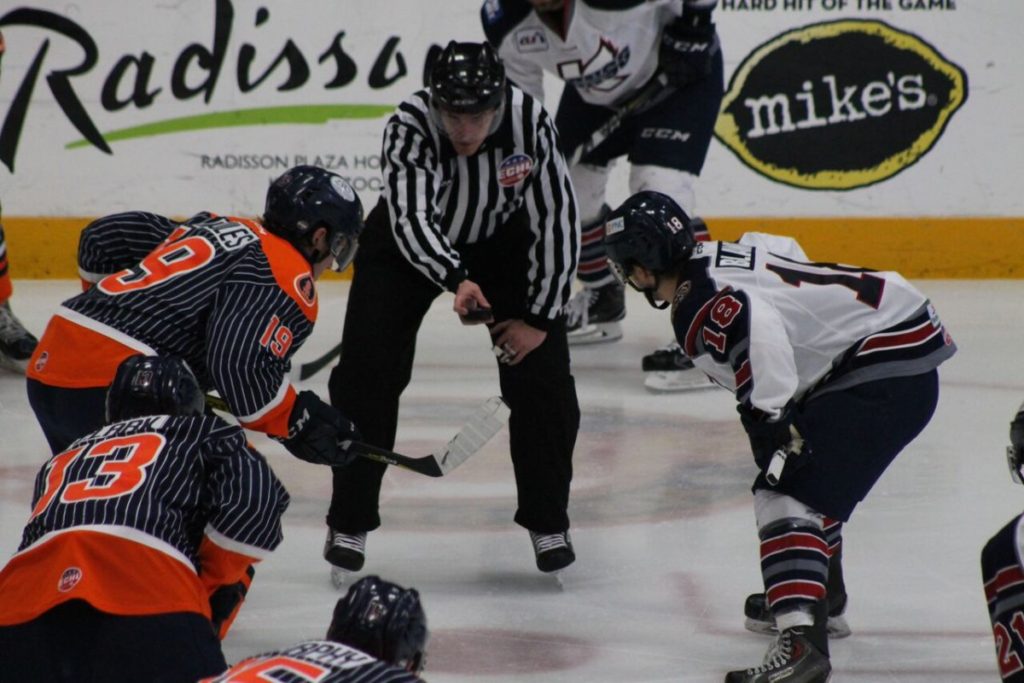 After a scoreless first period in the first meeting ever between the Oilers and Wings, Miles Koules broke a scoreless tie late in the second period to put Tulsa in front. Kalamazoo tied the game in the third period off of a faceoff win in the Oilers zone, but Darcy Murphy gave the Oilers a 2-1 lead with just over five minutes left. Kalamazoo forced overtime, when Tyler Shattock scored from the half wall with 34 seconds left in regulation and an extra attacker on, and Tanner Sorenson won the game for the Wings 35 seconds into overtime.

In a tight battle between two of the top three teams in the Central Division, Kale Kessy gave Tulsa a 1-0 lead on a centering pass from Tyson Wilson with 34 seconds left in the first period. Wilson set up Emerson Clark for the second Oilers goal late in the second period as Clark was coming out of the penalty box. Brady Vail scored for Fort Wayne on a 2-on-1 transition rush in the final minute of the frame to cut Tulsa’s lead in half, but Colin Stevens stopped 15 Komets shots in the third period and 33 of 34 for the game to preserve the Oilers’ 2-1 win.

For the fourth straight game on the road trip, Tulsa struck first, when Shawn Bates scored a short-handed goal on the first Oilers shot off of a centering pass from Nolan Julseth-White. The Fuel answered with three goals in the first 7:55 of the second period, led by Josh Shalla (1g, 2a), and carried that lead into the third. Julseth-White set up Darcy Murphy for the second Oilers goal with 6:13 to play, but Tulsa’s comeback bid came up just short in Indianapolis.

Manitoba center Dan DeSalvo recorded an assist Tuesday in the 5-2 Moose loss in Tucson against the Roadrunners. DeSalvo also scored a power play goal Sunday in Manitoba’s 4-1 win over Chicago, and leads the team with 10 goals in 27 games. Former Oiler Jimmy Lodge scored again for the Moose in the win and now has 7 goals and 7 assists in 33 games. Ryan Olsen scored goals in back-to-back games for Manitoba Friday and Sunday against the Wolves. Forward Alexandre Ranger scored his first AHL goal of the season Saturday in the St. John’s IceCaps’ 4-2 win over Hartford.