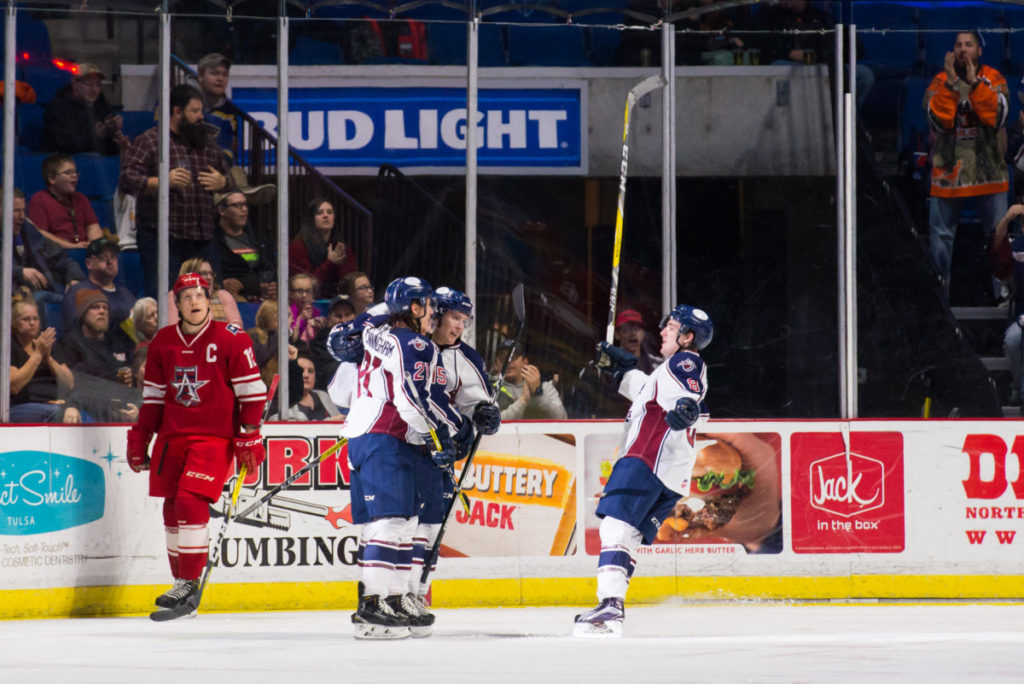 The Oilers won their second straight road game and fifth of their last six, thanks in part to the play of their special teams. Tulsa’s power play scored twice, while going perfect on the penalty kill. Emerson Clark scored two late first period goals, including one on a 5-on-3 man-advantage. Dane Fox cut into the Oilers’ lead early in the second period, but Garrett Ladd scored on another 5-on-3 in the final stanza to provide some insurance. Ladd had his first career three-point night (1 goal, 2 assists). Jamie Phillips took the win, stopping 27 of 29 shots.

Special teams cost Tulsa on Tuesday night against Allen, as the Americans scored on all three power plays, and added a short-handed goal to overcome three deficits in a 6-3 comeback win. The Oilers received goals from Danick Gauthier, Darcy Murphy and Miles Koules, but Spencer Asuchak and Chad Costello each had a pair of goals for Allen, and the Americans also picked up tallies from Bryan Moore and Jake Marchment.

The Oilers saw a 2-0 first period lead evaporate in the final game before Christmas that saw 90 combined penalty minutes. Darcy Murphy and Christophe Lalancette provided the first two goals, but Chris Francis recorded a late first period goal for the Mallards, who then added three in the second period. The Oilers made things interesting, when Shawn Bates scored early in the third, but Quad City hung on down the stretch, and received nine power play opportunities in the game.

Manitoba Moose forward Dan DeSalvo is tied for the team-lead with 8 goals, and is third on the team with 14 points in 18 games…Forward Kale Kessy has recorded 1 assist in 11 games with Manitoba since his call-up in early November…Former Oiler Jimmy Lodge has 5 goals and 5 assists in 24 games for the Moose this season. Lodge had a goal and 7 assists in 13 games with Tulsa in 2015-16.

The Oilers are in second place in the Central Division and fifth in the Western Conference with 36 points…Emerson Clark is second in the ECHL with 108 penalty minutes…Jamie Phillips leads all ECHL goaltenders in wins (16), minutes (1,452), and saves (675), second in shootout wins (3), and has the 8th best goals-against average (2.48)…Reid Halabi leads all rookies with 76 penalty minutes…Tulsa is 11-5-1 when scoring first and 8-3-0 against the Central Division…The Oilers have the 4th fewest goals-against per game (2.84) and are 10-0-0 when leading after two periods…Tulsa’s power play (9.2%) is 26th in the ECHL, and the Oilers penalty kill (78.3%) is 23rd.

Fans will have the opportunity to paint the ice at the BOK Center after Tuesday’s game against the Missouri Mavericks. Tulsa will then play on the painted ice Friday-Sunday during the three home games this weekend. It is also “Dollar Beer Night when the Oilers host the Mavericks at 7:05pm. Fans can visit the designated concession stand on the concourse for $1 beers!

The Oilers will sport throwback jerseys Friday, when they take on the Utah Grizzlies at 7:05pm at the BOK Center. The jerseys will commemorate the 25th Anniversary of Tulsa’s Championship season of 1992-93, and the player-worn sweaters will be auctioned off after the game at the OneOK Club on the concourse level.