Tulsa chases final playoff spot with 11 of final 14 games away from home, beginning with weekend trip to Wichita and Missouri. 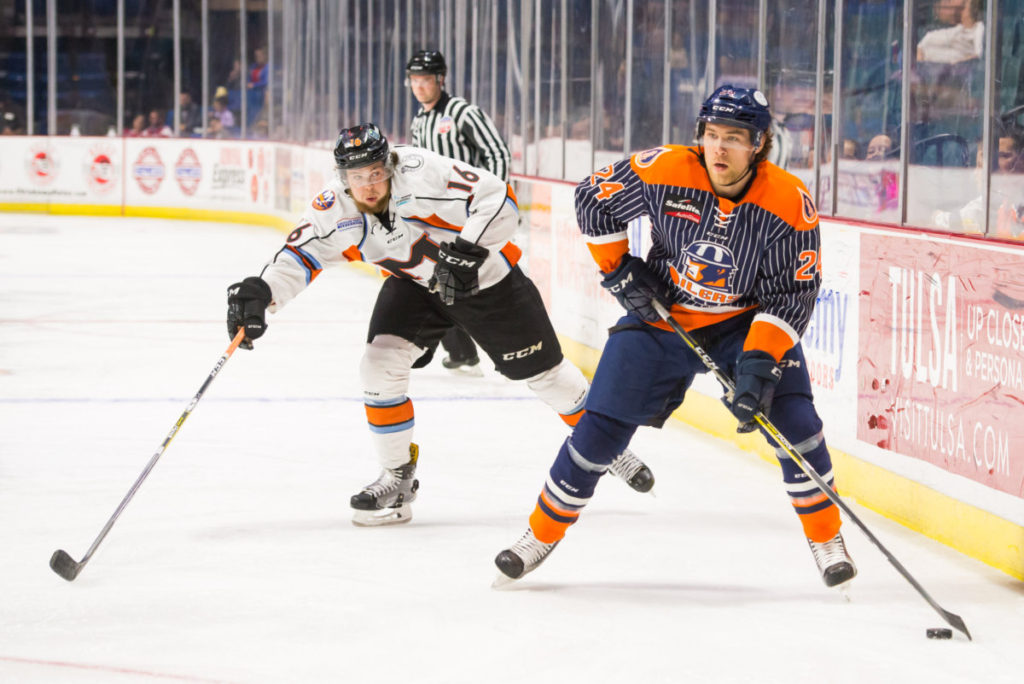 The Allen Americans jumped out to an early lead and never looked back Friday in a 9-1 win over the Oilers. Spencer Asuchak scored a power play goal 3:12 into the game, and Bryan Moore made it 2-0 towards the midway point of the opening frame. Christophe Lalancette provided the only Oilers goal at 12:57 of the period to cut Allen’s lead in half, but Gary Steffes added a power play tally after one. Josh Brittain and Chad Costello score in the first 12:06 of the second period, chasing Tulsa starter Colin Stevens for backup goaltender Jay Williams. Kale Kerbashian made it 6-1 after two. Costello completed his hat-trick in the third period, and Brittain tallied a second goal to finish the scoring.

With a depleted lineup Sunday, the Oilers outshot Missouri 43-25, but came up short again. Matt Robertson gave the Mavericks a 1-0 lead in the first period, and Dane Fox scored on a second period 5-on-3 power play to make it 2-0 heading into the final stanza. Tulsa generated 19 shots in the third period, and Kale Kessy deflected a shot from Eric Drapluk into the net early in the frame. Robertson added a second goal with 3:03 to play to make it 3-1, and Kevin Tansey picked up an empty net goal with 1:40 left to seal the Mavericks 4-1 win. Stephon Williams stopped 42 of 43 Oilers shots, while Colin Stevens made 21 saves in the loss.

Manitoba forward Dan DeSalvo sits all alone atop the Moose goal-scoring leaderboard, after notching his 13th of the season in a two-point game (1g, 1a) in leading the Moose to a 4-2 win over San Antonio on Sunday. DeSalvo is second on the team with 27 points (13g, 14a) in 45 games.

Goaltender Colin Stevens has been a workhorse for the Oilers. The Niskayuna, NY native started all 10 games for Tulsa in the month of February, and 15 of 24 games so far in 2017…Kale Kessy has scored 4 goals in his last 3 games…Defenseman Eric Drapluk has assists in 3 of his last 4 games.

The Oilers have 55 points in the standings after 58 games, and currently sit in 5th place, 3 points behind Kalamazoo for the final playoff spot in the Central Division…Tulsa is 16-0-0 when scoring 4 goals or more, but 9-28-5 when scoring 3 goals or less…The Oilers are 17-0-2 when leading after two periods, but are 8-28-3 when tied or trailing…Tulsa is 13-5-1 against Central Division opponents, but 9-20-4 against the Mountain Division.