MULTIPLE COMEBACKS NOT ENOUGH AS OILERS FALL TO MALLARDS 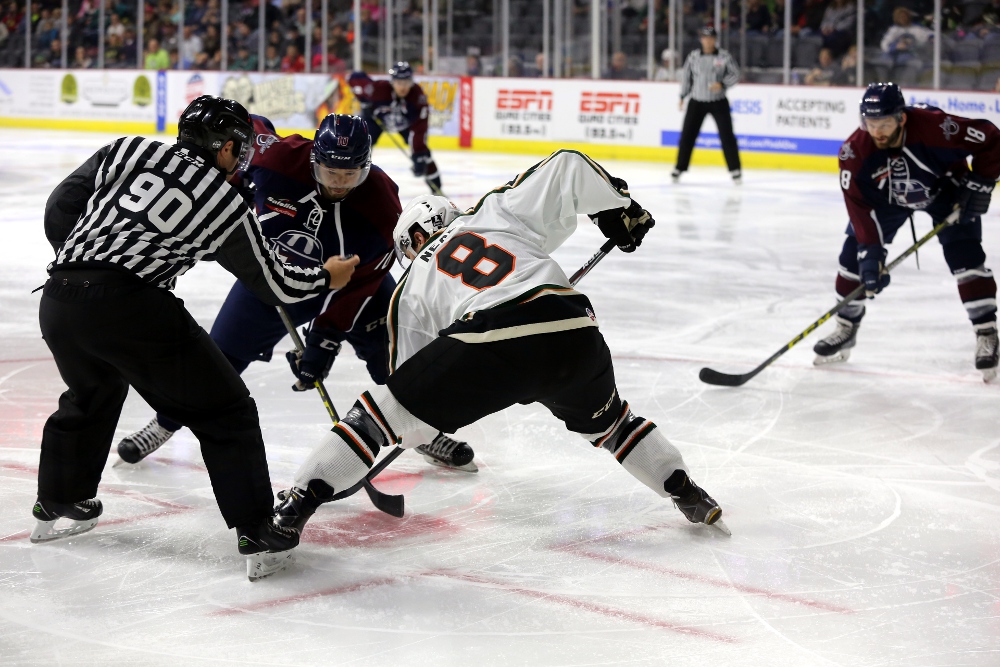 Oilers center Brandon Wong faces off against Matt Neal during the third period of a 5-3 loss to the Mallards on Saturday night. (photo by: Sarah Foster)
MOLINE, IL – The Tulsa Oilers battled back from three separate one-goal deficits on Saturday night but a late third period goal by Raphael Bussieres put the Quad City Mallards in front for good and lifted the home team to a 5-3 win in front of 4,040 at iWireless Center.  The Oilers were forced to settle for a split of the weekend series with the Mallards after earning a 1-0 victory on Friday.
After a lackluster performance on Friday night, the Mallards looked like a re-energized flock in Saturday’s opening period.  A wrist shot off the tape of Logan Nelson at 6:48 of the first frame zipped past Tulsa goalie Jussi Olkinuora to give the home squad a 1-0 lead.  Nelson, the Mallards leading goal-scorer, potted his fourth goal in as many games.  On the heels of back-to-back penalty kills, the Oilers responded with just over a minute remaining in the period.  Adam Pleskach’s pass out of his own zone created a two-on-one for Brandon Wong and Brian Nugent and it was Nugent who snapped a shot past the glove of Brody Hoffman to level the contest.  Wong tallied a point for a third consecutive outing and Nugent registered his second goal of the young season.
Early in the second period, Mallards’ rookie Miles Koules pounded a rebound into an open net to push his side back in front with the first goal of his professional career.  A pair of Tulsa rookies created the equalizer at 7:51 of the second as Dan DeSalvo’s low slap shot created a rebound in front of Hoffman that was poked home by the stick of Phil Brewer.  With Tulsa winger Adam Pleskach in the box for slashing, the Mallards power play came to life with a slap shot from Guillaume Gelinas that somehow whizzed into the net through a sea of bodies in front of Olkinuora.  Gelinas’ second strike of the season was just the second power play goal allowed by the Oilers through their first five contests.
Brewer recorded his second goal of the evening at 3:08 of the third period when he stuffed a loose puck underneath Hoffman to level the game at 3-3.  The score remained deadlocked until the 14:37 mark of the final frame as a backhand from Bussieres ramped off a stick in front of the Oilers net and fell behind Olkinuora for the go-ahead tally. Bussieres, a Longeuil, Quebec native, punctuated the night with an empty net goal at 19:40 to give the Mallards their first home win of the season.
The Oilers allowed just 18 shots on goal in Friday’s win but surrendered 37 in the loss on Saturday.  Tulsa finished 0-for-3 on the power play while Quad City ended up 1-for-4 with the man-advantage.  Each one of the Oilers’ five games this season has been decided by two goals or less and the Oilers fell to 0-3 when trailing after two periods.
Tulsa returns to action at home on October 30 at 7:05 p.m. for the first matchup of the season against the Missouri Mavericks.
Final Boxscore
Are you looking for Things To Do in Tulsa?