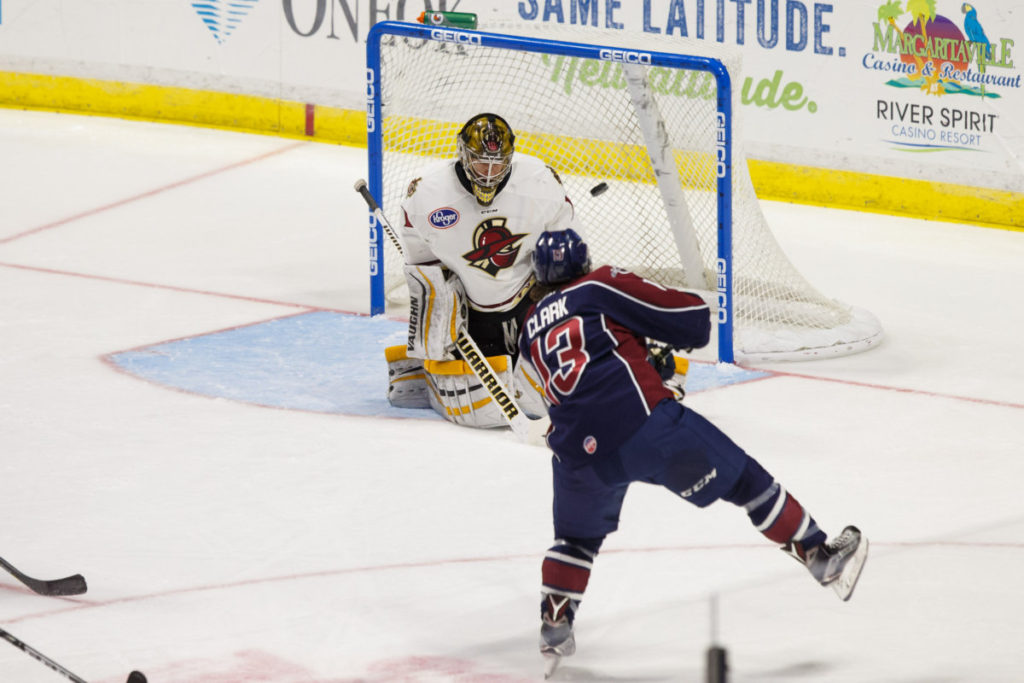 TULSA, OK – Emerson Clark and the Tulsa Oilers manufactured a thrilling comeback from a late two-goal  deficit to defeat the Atlanta Gladiators 4-3 in overtime Sunday at the BOK Center. Clark’s two goals and two assists, including a helper on Adam Pleskach’s game-winner completed a perfect 3-0 weekend for Tulsa to remain one of the last two unbeaten teams in the ECHL.

Atlanta broke a scoreless tie just over 12 minutes into the first period, when Eric Neiley tallied his second goal in as many nights. The Gladiators carried that 1-0 lead into the first intermission while outshooting Tulsa 13-7.

Clark fired a shot under the crossbar on a second period short-handed 2-on-1 rush to tie the game momentarily, but the Gladiators answered at the end of that same power-play, when Thomas Frazee banked a shot off of an Oilers player from a sharp angle. Justin Buzzeo added what appeared to be an insurance goal to bump Atlanta’s lead to 3-1 late in the second.

For most of the third period, the Oilers peppered Gladiators goalie Matt Ginn with shots to no avail. But the comeback started with 6:14 left in regulation, when Clark’s shot was tipped over Ginn’s left pad to cut Atlanta’s lead to one. Clark deflected in a Wes Cunningham shot with 1:04 to play for his second goal of the game to force overtime.

Tulsa heavily outshot Atlanta 21-3 in the third period, and 6-0 in overtime, as Pleskach jammed home a rebound with 41 seconds left for the game-winner. Goaltender Jamie Phillips earned his fourth straight win to start his pro career 4-0, as Tulsa picked up six out of six possible points this weekend.

With Monday off, the Oilers return to the ice Tuesday to host the defending Kelly Cup Champion Allen Americans at 7:05pm at the BOK Center. It will be the first of 13 meetings between the two Western Conference rivals. Then Tulsa hits the road for games Friday in Indianapolis against the Indy Fuel at 6:35pm and Saturday in Moline, IL against the Quad City Mallards at 7:05pm. Both games can be heard online